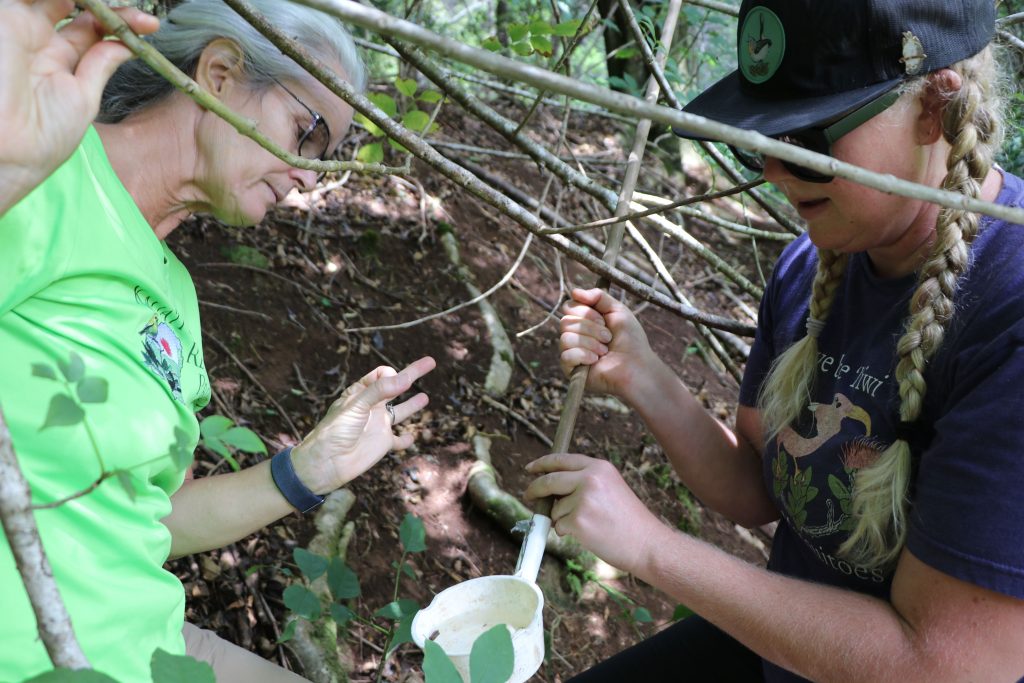 (Koke‘e, Kaua‘i) – Allie Cabrera describes herself as the ‘queen of the road’, due to her almost daily trips from Līhuʻe, to Koke‘e State Park, and onto Camp 10 Road. She could also be described as the current Kaua‘i ‘queen of mosquito trapping’.

As a field associate for the Kaua‘i Forest Bird Recovery Project (KFBRP), Cabrera spends her days checking two types of mosquito traps and visiting pools of standing water to catch the insects and treat water-filled road potholes, ditches, and other stagnant bodies of water to kill of any mosquito larvae they harbor.

“My main objective is to monitor the abundance and distribution of the southern house mosquito, which is the species that carries avian malaria,” Cabrera explained. The disease-carrying mosquitoes are responsible for the perilous state of the Hawaiian honeycreeper, the ‘akikiki, which has fewer than 40 individuals left in the wild.

KFBRP has been on the forefront of collecting mosquito data for more than ten years, building on a data set collected previously by the U.S. Geological Survey. Dr. Lisa, ‘Cali’ Crampton, the KFBRP Project Leader, said, “Kaua‘i, being a lower elevation island, was thought to be the canary in the coal mine for the advance of avian malaria into forest bird habitat. Other projects on other islands were in areas where native forest birds were thought to be more out of reach of avian malaria, so they started their survey programs later than ours.”

On Kaua‘i, Maui, and Hawai‘i Island, mosquito trapping surveys now have a sense of urgency, with three species of honeycreepers (‘akikiki, ‘akeke‘e, kiwikiu) on the precipice of extinction in the wild in under five years. Several other honeycreeper species are not far behind.

“Once upon a time you would have found ‘akikiki throughout our forests. When I first joined this project (KFBRP) in 2010 you could frequently see the birds on the famous Alaka’i Swamp boardwalk, and now they have receded into the deepest, most remote mountainous regions, as a result largely of mosquito-borne disease,” Crampton added.

Across the state, out in the forests and on some private land, teams are using two types of traps to help inform potential landscape-scale mosquito management. One is a carbon dioxide trap that attracts blood-seeking female mosquitos, and the other is called a gravid trap, which uses a stinky water solution to trap mosquitoes ready to lay eggs.

Currently, on Kaua‘i, the KFBRP team runs eight of each trap type at three different locations. Once a female southern house mosquito is trapped by either trap type, they are put into small test tubes. The samples are sent to labs where they are tested for the presence of avian malaria.

Crampton noted, “When we first started this there was not much avian malaria up on the Alaka’i Plateau…zero out of ten, or maybe one out of ten mosquitoes tested positive. Now, we see as many as four out of ten testing for avian malaria now that the disease dynamics have started to ramp up on the plateau.”

Just last week, a single ‘akikiki was rescued in an area that used to have an abundance of the birds. It’s believed the bird, named Carrot, is one of two remaining in an area that as few as seven years ago had more than 70 birds.

Mosquito trapping this year will help the group of government and non-governmental organizations that have banded together as the Birds, Not Mosquitoes collaborative decide how and where to distribute incompatible male mosquitoes into forest habitats most severely impacted by avian malaria. Male mosquitoes do not bite or transmit disease, and when incompatible males breed with wild female mosquitoes, no viable eggs are produced. It’s “mosquito birth control”, which causes mosquito populations to decline.

Cabrera reflected, “I feel proud and honored to do this work in such a special place. It means the world to me. I take this job very seriously, as I feel we are doing really important work and hopefully helping to save these forest birds.”