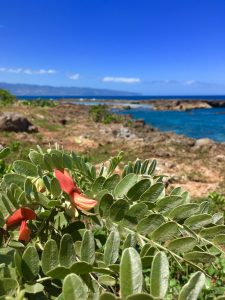 The entire Pūpūkea MLCD receives high wave activity in the winter months, mobilizing underwater boulders even at depths of 40 feet. Therefore it is educationally valuable as a study of high-wave impact zones because the wave activity has a profound effect on the ecology of the MLCD. Coral cover is relatively low and those that do live in the area are species that can withstand pounding waves.

The area within the Pūpūkea MLCD that stretches from behind the Sunset Beach fire station over to Kulalua Point (the point between Shark’s Cove and Keiki Beach) is known as Kapo‘o.  Kapo‘o gets its name from the loud echoing or boomingsound of the waves that crash onto the exposed ancient reef, and during the winter surf season is the perfect time to listen and watch for these explosive displays.

Within Kapo‘o is a place of peace and safety; a sanctuary functioning much like a nursery: a pu‘uhonua for marine life.  Many of us have experienced this protected place whether it was transiting by and seeing it; taking our keiki to play in its shallow waters; or perhaps you’ve taken the time to throw on a mask and snorkel to explore its shallow marine habitat.  The Kapo‘o Tidepool, commonly referred to as the Pūpūkea or Shark’s Cove Tidepool, has served as an iconic landmark for those that live in the community or have spent time in the area.

The Kapo‘o Tidepool area is unique from other coastal zone habitats found around Hawai‘i.  It is a protective sub-tidal pool roughly the size of three football fields that maintains a connection to the ocean at several points; therefore, it is not, by definition, a tidepool.  Though tidepools do occur at Kapo‘o, the feature most closely aligns with the description of a lagoon or coastal embayment.  Either way, all three habitat types can function as an important nursery for reef fish and other marine life.

During months of little wave action, the Tidepool takes on a brackish water nature when it is fed fresh water from submarine springs.  The unique and dynamic ecosystem of the tidepool hosts an abundance of native juvenile fish species that help recharge fish stocks in the Pūpūkea MLCD.  This in turn restocks fish in open fishing areas along the neighboring coastline outside of the MLCD in what is called spillover.  Protecting fish and other marine species here means increasing numbers elsewhere.

Mālama Pūpūkea-Waimea (MPW), the community organization that helps to care for, educate about, and protect the Pūpūkea Marine Life Conservation District, has performed years of kilo, or observations, in and around the Kapo‘o Tidepool to capture changes in the natural environment which experiences heavy human use year-round.  Kilo coupled with western scientific survey methods helps MPW understand the environment, ecology and the impacts to marine life in the Kapo‘o Tidepool.  Well over 80 unique species of fish, 30 species of limu (algae), and dozens of coral and invertebrate species make up the tidepool’s rich diversity of native marine life.  Additionally, shorebirds, turtles, Hawaiian monk seals, eagle rays, and white-tip reef sharks often pay visits to the area. In addition to conducting biological monitoring, MPW works to actively steward this special place through vigorous outreach and educational programs, and a Native Hawaiian Plant Coastal Restoration project that helps to reduce runoff and sedimentation onto the coral reef.  MPW is currently the only Makai Watch community on O‘ahu and offers regular public training sessions for anyone who is interested.  To learn more about Makai Watch, visit https://dlnr.hawaii.gov/makaiwatch/.

To learn more about Mālama Pūpūkea-Waimea and the work they’re doing, visit https://pupukeawaimea.org.