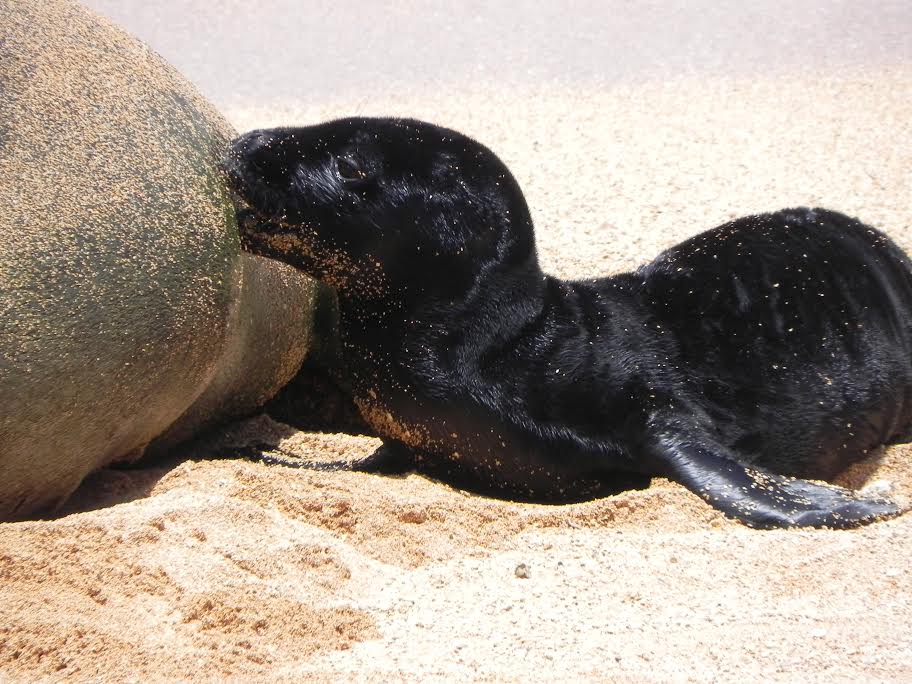 LIHU‘E, KAUA‘I  – The National Oceanic and Atmospheric Administration (NOAA), in cooperation with the Department of Land and Natural Resources (DLNR), is investigating the suspicious death of a Hawaiian monk seal on the Northeast coast of Kauai. Anyone with information about this incident should call the toll-free, confidential reward tip line, 1-855-DLNR-TIP

In cooperation with DLNR, the Humane Society of the United States, (HSUS) has again posted a $5,000 reward for information leading to the arrest and conviction of the person(s) responsible for this latest monk seal death.

The young female seal (RF58) was found dead from blunt force trauma at a beach in Anahola on Nov. 30. She was born on June 28, 2014 on Kaua‘i’s northeast coast. RF58 was seen perfectly healthy and behaving normally when observed near her birthplace less than 24 hours before she was found dead.

“Like all Hawaiian monk seals, RF58 was a vital and integral part of our native Hawaiian ecosystem,” said William J. Aila, Jr., DLNR chairperson. “Killing a healthy young female monk seal in the wild is senseless and only makes things worse for our local ocean resources and the people who depend on them.”

RF58 was the daughter of a well-known seal (RH58, or “Rocky”) who spends most of her time on O‘ahu, but usually pups on Kauai. She and her mother were victims of a dog attack in July 2014 that killed another pup. After developing abscesses (i.e., infection) from the dog bites, RF58 was treated by a veterinarian and recovered.

According to the preliminary post-mortem report from the Marine Mammal Center and NOAA Fisheries’ Conservation Medicine Officer, “The seal likely did not die immediately, but from complications associated with massive trauma and internal bleeding.”

Monk seals are endemic to Hawai‘i; they are a native species found nowhere else in the world. The species is critically endangered.

It’s a Class C felony to kill a monk seal.  Someone convicted could face fines of up to $50,000 and five years in prison. It is also against federal law to kill or harm a Hawaiian monk seal and a conviction can include additional fines and jail time.

The most recent suspicious death of a Hawaiian monk seal was in April 2012, also on Kaua‘i. From November 2011-April 2012, there were four seals found dead under suspicious circumstances on Kaua‘i and Moloka‘i.

The reward being offered in this case is in addition to standing rewards for information leading to the arrest and conviction of the people responsible for killing the four monk seals on Molokai and Kauai in 2011 and 2012.

Anyone having information related to these deaths should call the NOAA OLE hotline at 1-800-853-1964 or Division of Conservation and Resources Enforcement (DOCARE) at the Tipline at 1-855-DLNR-TIP or 643-DLNR.