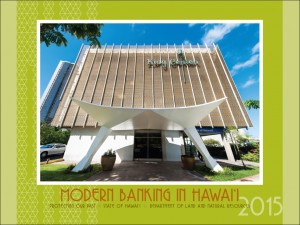 HONOLULU —   Fans of the annual State Historic Preservation Division (SHPD) photographic calendar will find an unique historic journey in the 2015 edition, which highlights the evolution of Hawaii’s financial institutions. Built in an era of expanding prosperity, these institutions represent the optimism and confidence of the new and exciting world dramatically emerging in Hawai‘i, as well as an abiding faith in the future.

The beautiful calendar was designed by Viki Nasu Design Group, with David Franzen providing magnificent photographs of iconic buildings that island residents will remember. Copies of the “Modern Banking in Hawaii,” which also serves as a tide calendar, are now available for purchase from Hawaii Heritage Center (1040 Smith St., Honolulu, or by mail at: P.O. Box 37520, Honolulu, HI 96837), as well as at Book Ends in Kailua and Na Mea Hawaii/Native Books at Ward Warehouse in Honolulu.

In December 1941, on the eve of the attack on Pearl Harbor, there were seven banks operating in Hawai‘i.  Two of these banks, Bishop National and Bank of Hawaii, traced their history back to the 19th century.

Liberty Bank was founded in 1922 by Chinese businessmen, while the American Security Bank emerged in 1935 from an attempt to reorganize the former Chinese-American Bank (established in 1916).

In addition to their main bank buildings, Bank of Hawaii and Bishop National Bank (renamed First National in 1960 and First Hawaiian in 1969) served all the neighbor islands and had eleven branch banks on O‘ahu, while American Security Bank had a branch on Kaua‘i.

In addition to the banks, five building and loan associations operated in the territory, including Pioneer, which obtained its charter from King Kalakaua in 1890, Territorial and State, both of which formed in the 1920s, and First Federal and Home, both of which originated during the 1930s.

With the advent of World War II, the federal government shut down the Japanese-owned Sumitono and Yokohama Specie (now the Bank of Tokyo) banks, as well as the locally owned and operated Pacific Bank.

Following the war Hawai‘i experienced a dramatic increase in banking activity in the Islands, and several new banks were formed:  Veterans from the 442nd Regimental Combat Team and 100th Infantry Battalion led the impetus to form both Central Pacific Bank (established 1954), and City Bank of Honolulu (established 1959), while K. J. Luke established Hawaii National Bank in 1960.  With an expanding population, especially on O‘ahu, new branches were built to service the suburbs and various areas of Honolulu, and by 1970 the number of branch banks on O‘ahu alone had more than tripled.

Buildings and Loan Associations, which were transformed into Savings and Loan Associations also grew in popularity after World War II, with the five pre-war companies joined by American, Finance, Honolulu, International, and O‘ahu savings and loan associations during the late 1940s and 1950s.  Designed for the specific purpose of encouraging thrift through savings and boosting home ownership through the making of mortgage loans, these institutions helped fuel the tremendous expansion of housing during the 1950s, with the dollar value of their mortgages increasing 348% between 1951 and 1961.  Restricted by law to first mortgages under $35,000, with down payments ranging from 25-40%, the S & Ls were the largest provider of Hawai‘i’s home mortgages by 1960, controlling over 40% of the market.

Many of the banks, credit unions and S & Ls operated from leased spaces, often times in shopping centers or commercial buildings with multiple tenants.  However, a number of institutions constructed buildings specifically to house their operations.

In 1960 International Savings and Loan erected its million dollar plus main office at King and Bethel (no longer extant), the largest and most expensive financial building constructed in Hawai‘i in over 30 years, only to be eclipsed a little over a year later in 1962 by the 18-story First National Bank (no longer extant), the first high rise building in downtown Honolulu.