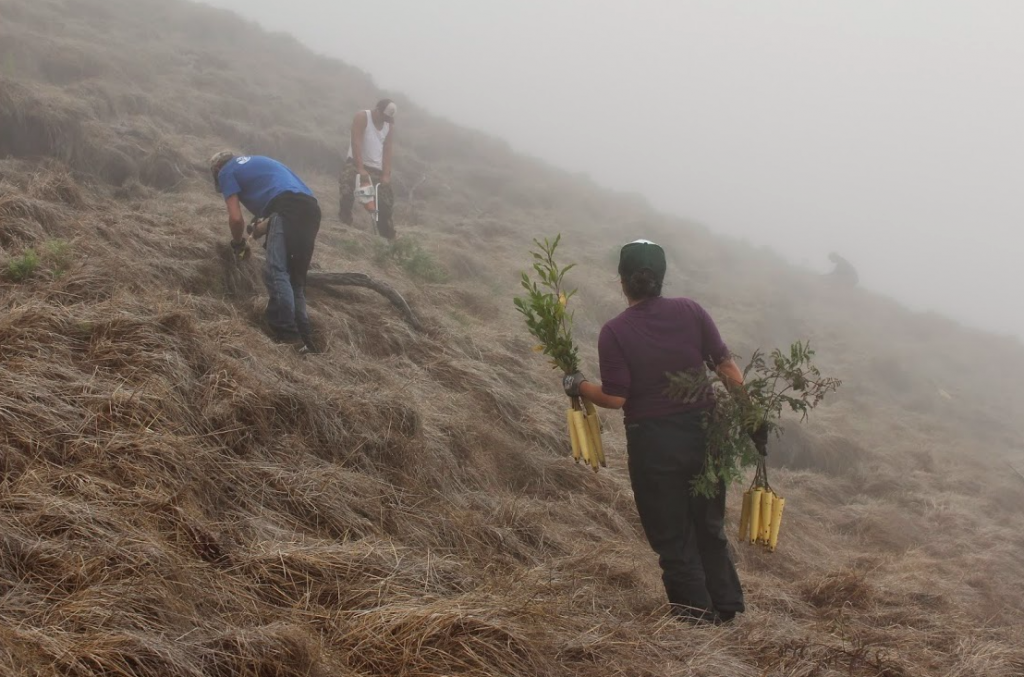 KAHULUI — “E ola ‛oe. E ola mâkou nei,” Malia Heimuli whispers as she removes a koa seedling from its container and buries its roots in the soft, dark earth. “It means you live, so we live.”

It’s fitting that in the weeks preceding Arbor Day – Friday April 24, groups of Kupu Hawai‛i Youth Conservation Corps volunteers have traveled to the Division of Forestry and Wildlife -run Nakula Natural Area Reserve (NAR) high on the leeward slopes of Haleakalâ. The aim of this partnership: planting 20,000 native trees to help bring life and water back to barren slopes damaged by non-native hooved animals. The catch: planting at a rate of around 2,800 trees a day to make use of $300,000 in federal grant money before the end of 2016. But the enthusiastic team of volunteers is up for the challenge.

Established in 2011, the Nakula NAR is an extraordinary landscape with a dramatic elevational change of 5,600 vertical feet in 2.5 miles. The mostly koa-dominated dryland forests are habitat for 9 species of endangered Hawaiian plants and 4 species of birds, including the Kiwikiu or Maui Parrotbill. With populations numbering only 500, it is now one of the rarest birds in the world. While no longer found here, the Maui Forest Bird Recovery Project plans to start reintroducing Kiwikiu in 5 years’ time as an insurance policy to prevent extinction of the species.

This ambitious plan relies on the revival of the forests. Along with those on the Big Island, the koa forests of leeward Haleakala were once the major source of logs for wa‛a (canoes) that supplied ancient Hawaiian voyagers. Where there was once a vast forest, a scarred landscape of invasive grass and red earth remains. In some places, entire chunks of the mountainside have been washed out onto the coral reefs below.

Gina Carroll, of Kupu Hawai‛i, points out the few remaining trees in the valleys, “When you see how large the koa trees are, you can imagine what it must have been like across the whole landscape. You cannot help but think what the trees would say if they could talk.”

According to Peter Landon, manager of the NAR System on Maui, “Pressure from ungulates is what really destroyed it all; the trees just couldn’t handle being trampled and eaten, and now the environment may be too dry for any of the seeds to establish. Back when it was a closed canopy forest, there used to be freshwater springs and streams that ran all the way to the ocean.” About Nakula he says, “This is really it. We are attempting to restore a forest in a small reserve of 1,400 acres, we’ve got Kanaio NAR (less than 900 acres) and that’s all we’re protecting from a dryland forest that used to span from Makawao to Kaupo; it’s kind of sad.”

Goats and cattle are still a dire threat to the remaining 5% of dryland forests on Maui. A helicopter flyover of a single ravine outside the boundary fence reveals hundreds of goats. The animals are present in such numbers that they overflow from rocky hiding places out onto the slopes. Fences hold back the onslaught from forests which are gradually being brought back to life by a dedicated team of a handful of Division of Forestry and Wildlife staff and dozens of volunteers. Without them the unique forests and birds, the very first inhabitants of Maui, will not return.

Each morning starts with a steep climb from base camp up the slopes, where thousands of koa, ‛ô‛hia lehua, mamane and a‛ali‛i seedlings have been dropped by helicopter. The sun shines hot and bright, illuminating the rolling valleys stretching below to the sea. Within minutes, the view is whitewashed by clouds rolling in. Up here this is a daily occurrence. Tiny water droplets cling to the hairs on the volunteers’ skin and eventually fall to the ground, illustrating one of the reasons why Hawai’i’s upland forests are so crucial for ensuring healthy watersheds. Trees act as traps, condensing moisture from the clouds and recharging groundwater in what would otherwise be a dry habitat. It is predicted that bringing back the trees will one day return water to the dried up streambeds.

The volunteers form an outplanting assembly line, putting trees in the ground at an incredible rate. They are all interns under the Hawai‛i Youth Conservation Corps program, which places aspiring young conservationists at various environmental partner organizations. Many of the interns are inspired to channel their passion for nature into further studies or careers.

For Nôweo Kai, 33, something she’s valued during the program is, “the immersion: being completely surrounded 40 hours a week by individuals who actually share the same interests and passions as me”. When asked why she wants to conserve these areas, she replies, “There’s a foundation of place. I love – I am in love with – these islands. And I feel like the unique things that make up these islands biologically (and of course historically and culturally), that’s something that’s in the very core of me.”

Despite the lighthearted banter during outplanting, when they talk story around the campfire, every single person seems moved by the experience. Maeghan Castillo (25) describes it as “an experience so rare, it’s almost as if we are starting another chapter in our lives”. Gus Robertson (24) feels “profoundly humbled to be involved in this type of work. To think about this place before it was degraded, all rugged and wild, and to think about our grandkids being able to visit in 100 years when it will be a vibrant forest again, gives me a great sense of accomplishment and joy.”

Christopher Zauner, 18, articulates the sentiment shared by many: “Look how few people we are and how much we’re doing. Just imagine what a whole island could do…”

To get involved in one of DOFAW’s volunteer programs, visit http://dlnr.hawaii.gov/volunteer/ or http://dlnr.ivolunteer.com to sign up for volunteer opportunities on your island.