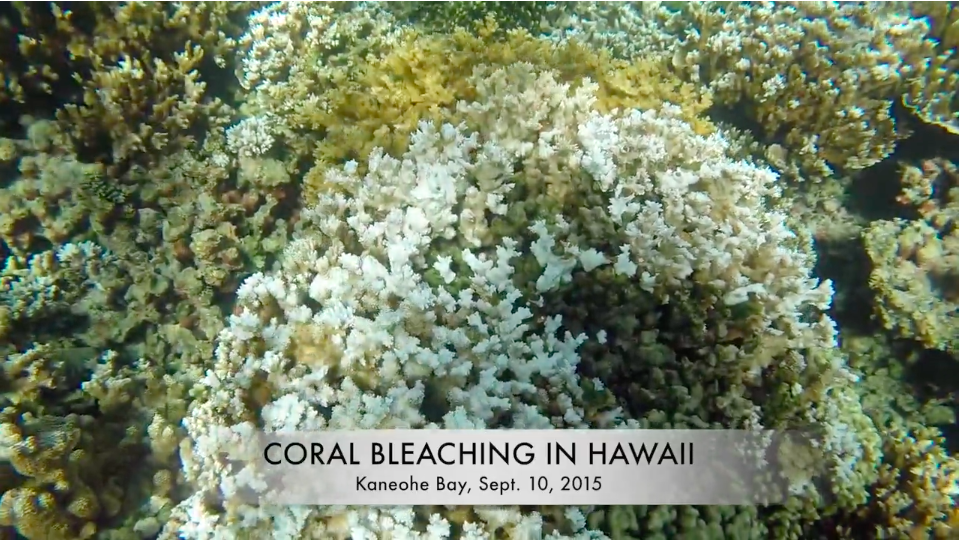 (HONOLULU) – As predicted, coral reefs across Hawaii from Kure Atoll, the northernmost land feature in the Hawaiian Archipelago, to Hawaii Island are starting to feel the effects of coral bleaching. This is a result of coral sensitivity to rises in ocean temperatures as small as 1-2 degrees. Climate experts from the National Oceanic and Atmospheric Administration’s (NOAA) Coral Reef Watch program forecasted severe coral bleaching conditions for Hawaiian waters beginning in August and continuing through October. The warnings indicate that high ocean temperatures compounded by an El Nino event have a strong likelihood of causing mass coral bleaching across Hawaii. Last summer saw the first documented event of mass bleaching across the entire archipelago, and reefs in the Northwestern Hawaiian Islands (NWHI) experienced their third and worst reported mass bleaching event to date.

Brian Neilson, an aquatic biologist with the Department of Land and Natural Resources (DLNR) Division of Aquatic Resources (DAR) said, “Coral bleaching is a result of a loss of algae living within the coral’s tissue that provide them with energy and give them their colors. This loss results in the pale or white ‘bleached’ appearance of the impacted corals. When corals bleach, they lose a supply of energy and become particularly vulnerable to additional environmental stresses.”

Scientists and members of the public have started observing coral bleaching, including in areas impacted by last year’s event like Kaneohe Bay on Oahu. Dr. Ruth Gates, director of the Hawaii Institute of Marine Biology (HIMB) observed that, “Some corals in Kaneohe Bay are already visibly pale or white, reflecting the detrimental impacts of unseasonably high seawater temperatures that we have been experiencing.”

The NWHI were also affected by coral bleaching last year and a returning NOAA research cruise from Papahânaumokuâkea Marine National Monument recently arrived with updates from that area. “We did see signs of recovery of corals in certain places,” said Courtney Couch, Ph.D., a researcher with HIMB who recently revisited sites affected in the NWHI to assess coral mortality and recovery from last year. “But at certain sites that experienced the most severe coral bleaching, we found that 85 to 100% of the corals have died. This is especially concerning since these sites are home to some of the most unique and rare coral species.”

There is concern about corals dying from bleaching because degraded reefs diminish shoreline protection and the availability of habitat for fish and other marine species, which negatively impacts ocean-related businesses and tourism, availability of fish, as well as quality of life for humans. Corals can recover from bleaching, but will die if they bleach for prolonged periods of time. Algae can quickly colonize space opened up when corals die, which slows the recovery of the coral reef. To measure and respond to anticipated coral bleaching effects, DLNR has begun mobilizing monitoring surveys and meeting with partners statewide to devise coordinated response actions.

Despite the mortality of bleached corals in the NWHI, NOAA Superintendent for Papahânaumokuâkea Marine National Monument Athline Clark remains hopeful saying, “With the Monument’s fishing restrictions and healthy herbivore populations [fish and other animals that keep algae in check], there’s hope that reefs in the NWHI will repopulate. The NWHI serves as a natural reference site to help us to understand how reefs that are not exposed to human influences can possibly recover faster than those in the populated islands of our archipelago.”

Case emphasized that Hawaii’s coral reefs are the foundation of a healthy ocean. “If we fail to protect them and lose them, it could have tremendously negative impacts not only on the overall ocean ecosystem but on Hawaii’s economy.”

The state encourages people to report and document coral bleaching to the volunteer Eyes of the Reef Network www.eorhawaii.org, send images of coral bleaching to [email protected], and help coral reef ecosystems during these times of high stress.