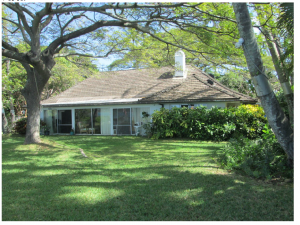 HONOLULU —   The Hawai‘i Historic Places Review Board has added 12 properties to the Hawai‘i Register of Historic Places. Properties are eligible for inclusion in the register because of their association with broad patterns or events, or individuals important in the history of Hawai‘i. They are usually significant in architecture and design, are likely to yield important information, and their features retain their qualifying integrity.

The following properties were added to the Hawai’i Register on August 28, 2015:

Located on the west side of Manoa Valley in Honolulu, there are four buildings on the property including the main house, a former servants’ quarters, a garage, and a bomb shelter. The main house incorporates an eclectic mix of several architectural styles and forms. It most resembles a bungalow or even a later ranch style house, but its decorative elements follow Colonial Revival and English cottage styles. The house and its associated structures are significant for their association with the development of Manoa Valley, their design by prominent Honolulu architect Hart Wood. The home retains much of its physical integrity, though both the home and its neighborhood have seen few changes since its original construction in 1923.  Manoa Valley remained a quiet, nearly rural, suburb with agriculture remaining in the lower valley until the Japanese attack of December 7, 1941, and the U.S. entry into World War II.

The Kalama Beach clubhouse is situated in a quiet residential neighborhood in Kailua between the ocean and North Kalaheo Avenue. It is a single-story, single wall building with a composition shingled hip roof with open, overhanging eaves with exposed rafter tails.  The 40’ x 56’ structure sits on a poured in place concrete slab foundation and its walls are of tongue and groove.   Behind the clubhouse is a 9’ x 16’ gable roofed fire pit, which was added in the 1980s, as well as an approximately 36’ x 64’ hau (Hibiscus tiliaceus) covered lanai with a sand floor.  The clubhouse, which is in very good condition, retains its integrity of location, design, materials, setting, craftsmanship, feeling and association. The Kalama Beach clubhouse is significant for its associations with the development of the Kalama subdivision and as a good example of a 1920s single wall building used for ocean recreation purposes.

The Henderson residence is situated in a quiet residential neighborhood situated on the lower flank of Diamond Head at the end of a dead end street.  It is a single story, modern Hawaiian style house with a concrete slab foundation and stained, 12” wide redwood tongue and groove walls.  Its low pitched, standing seam metal, intersecting hipped and gabled roofs are overhanging with open eaves and exposed rafter tails.  The house is characterized by a rectangular main body, with several wings projecting from it on various sides.  The Henderson residence is significant as a good example of a house built in Honolulu during the late 1950s in a modern Hawaiian style.   The house includes a number of distinctive features and is typical of its period in its design, materials, workmanship and methods of construction.  It is also the work of a master having been designed by Johnson & Perkins, and possesses high artistic values.

The John Walker beach house is located on a beachfront lot in the northern portion of the Lanikai neighborhood in the windward O‘ahu town of Kailua. The house is centered in the width of the lot, and set away from the street, close to the beach, with a small lawn on the beach end, and a larger lawn on the street end. The house is a modest-sized, one-story bungalow and is rectangular in plan. It is constructed of vertical wood boards, and textured concrete block. The roof is hipped, with a gable section over the entry porch, and has four small hipped dormers – one for each side of the house. The John Walker beach house is significant for its association with the development of the Lanikai neighborhood, and for its association with prominent Hawai‘i contractor John Walker, and for its embodiment of the craftsman bungalow style, and for the use of Walker’s patented concrete block as a decorative element.

The 2927 Hibiscus Place residence is located on a sloping lot on the corner of Hibiscus Lane, located along the outer rim of Diamond Head in an area known as Diamond Head Terrace. The residence consists of a split-level main floor, plus an occupied basement. The yard is enclosed with a stucco wall along Hibiscus Lane, and with a low lava rock retaining wall and a Panax hedge. The small residence is modest in size and design, with an asymmetrical façade largely characterized by a complex gable roof. In keeping with several other historic residences in Diamond Head Terrace, it exhibits Spanish and Mediterranean influences. These details include textured stucco walls, a flat roof (parapet) section, several approximately 12″-thick interior wall sections, metal exterior hand rails, decorative cast iron foundation screen vents, and carved rafter tails. The interior finishes exhibit a formal design hierarchy typical of the period, with greater detailing and richer materials used in the public spaces (entry area, living and dining rooms) and more common materials found in the private areas (kitchen, bedrooms, and bathroom). The residence retains its historic integrity, particularly with respect to the intact architectural details.

Malama manor is located in Manoa Valley within a residential neighborhood developed during the early 20th century.  Built in 1927, this single family dwelling is an exceptional example of American craftsman architecture and maintains much of its integrity. It is a two-story wood frame, side-gabled roof home constructed on top of a lava rock foundation. Throughout the interior and exterior of the home original details are prevalent, and include: six-over-one double hung windows and ten-light casement windows, prominent front dormer window with triangular knee braces and exposed rafter tails, maple floors, doors and glass door knobs. The fusion of American craftsman architectural style with local Hawaiian materials has fused to create a unique early twentieth-century Hawaiian craftsman architectural style. The use of local materials such as lava rock and canec ceilings gives this home a distinctively Hawaiian design.

The Frandsen residence is situated on Makiki Street across from Hanahauoli School.  It is a two-story, Mediterranean revival style house built in the 1930s, featuring a wrap-around front porch and a composition shingle, hipped roof with overhanging, closed eaves.  The house sits on a raised concrete and post and pier foundation.  Its walls are stucco on lathe, and its original pink color was impregnated in the stucco.    Quoins (masonry blocks at the corner of a wall) accent the façade’s two corners.  The house is in excellent condition.

The Walter Irving Henderson house is a small two-story cottage located on a large lot between Ali‘i drive and the ocean front in Kailua-Kona. The lot also contains two smaller, one-story structures; a former catchment shed, and a boat house later added in 1967, and is surrounded by a dry-stack stone wall. The buildings are set on a grassy lawn, and the house has views of the ocean toward the West. The house is a mix of two styles, appearing much like a plantation cottage perched atop a sturdy box. The upper story is wood board and batten while the first story is mortared lava rock.  One prominent decorative feature is the flat sawn balusters located at the balcony of the second floor, facing the street. The catchment shed was built simultaneously with the house in 1953, while the boathouse is a 1967 construction. The dry-stack stone walls predate the 1953 house and are a contributing element. The house, outbuildings and dry-stack stone walls retain all aspects of integrity, though integrity of setting is slightly compromised. The Walter Irving Henderson house is significant at the local level under a National Register criterion for type of construction, and as the work of a master. First-floor walls are an extant example of a type of lava rock construction type that was common in the Kona area during the mid-19th century, while the entire second floor and interior of the first floor were designed by celebrated local architect Vladimir Ossipoff. The first period of significance is when the first floor structure was built, circa 1864, as a small Catholic church. The second period of significance is 1953, when the deteriorated church was renovated and the second floor was added, for use as a beach house.

This 10th Avenue home located in Kaimuki is a two story frame, craftsman style bungalow in good condition, with a rectangular plan, an intersecting gable roof, and a front porch. WW I brought many changes to the house. The house interior was divided into smaller units and used as a boarding house to compensate for the severe housing shortage during the war.  The Dexter house illustrates the broad patterns of development during two periods of Hawaii’s history: first in the late 1920s, as it was built during a time of tremendous growth of outlying neighborhoods in Honolulu. The second, as an example of a large single-home being converted to a boarding house during World War II. Architecturally, this house is of artistic value and is one of the few remaining examples of  this style that exist in the area.

The Thomas and Helene Farr residence is situated on the uphill, mauka side of Makanani drive on Kamehameha heights in a quiet residential neighborhood situated immediately below Kamehameha School.  The two-story colonial revival style house sits back from and well above the road on a lava rock foundation and has a garage inset under its right corner.  A composition shingle, hip roof with open, overhanging eaves and exposed rafter tails caps the building, and a centered, gable roofed entry provides a focal point.  To the right of the house, on the third of four terraces is a free standing, covered, 19’ x 21’ lanai constructed in 1957.  The main house is in very good condition.   The Thomas and Helene Farr residence is significant as a good example of a colonial revival style house built in Honolulu during the 1920-1930s, which underwent a limited remodel in the 1950s.

The Abbott residence is situated on the mauka side of Aukai avenue in Kahala in a quiet residential neighborhood. It is a, single-story, modern style house with a poured in place concrete slab foundation, which follows a L-shaped plan.  Its walls are of 12” Douglas fir, v-joint, tongue and groove boards.  Its composition shingle hip roof has open, overhanging eaves with exposed rafter tails.  The Granville Abbott Jr. residence is significant as a good example of a house built in Honolulu in the pre-World War II period in a tropical modern style.

The J.B. Guard House is located on an oceanfront lot on the eastern edge of Maunalua Bay, in the Portlock neighborhood of O‘ahu. The one story house has an asymmetrical plan with a large living room and enclosed lanai at the center, flanked by a kitchen and service wing on one side and bedroom suites on the other. The garage, although a separate structure from the house, shares a continuous roof, forming a breezeway/entry space between. The roof is a steep, double-pitched, hipped roof; the iconic “Dickey roof” that has become emblematic of Hawai‘i architecture. The roof is, by far, the dominant visual element of the home. Other character defining features include the stucco-covered concrete masonry unit walls with their punctuations of patterned masonry grillwork, the expansive indoor/outdoor style living and lanai spaces, and the acid stained concrete floors throughout the interior. The J.B. Guard house is significant as an excellent example of a Hawaiian style residence, a regional vernacular, climate-driven design and as the work of a master, being designed by the acknowledged pre-eminent architect of Hawaiian style architecture, Charles W. Dickey.

For further information about how to list a property on the Hawai‘i Register of Historic Places, contact:  Megan Borthwick, State Historic Preservation Division, at (808) 692-8015