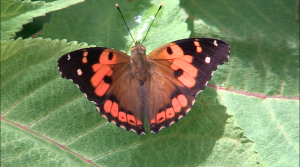 (Honolulu) – The deep, beautiful orange and black hue of Hawai’i’s official state insect is well known by visitors to native forests, and cultural practitioners. It is considered a critical pollinator for numerous native plants. The Kamehameha butterfly, like so many insects, plants, and animals in Hawai’i, is being crowded out of its traditional habitat by ever-encroaching human presence, the introduction of invasive predator species, and global climate change.  Although the butterfly is historically known from all the main Hawaiian Islands (Kauaʻi, Oʻahu, Molokaʻi, Lanaʻi, Maui, and Hawai’i), it is no longer found in some areas where it used to be common and it appears to be declining. The Pulelehua Project includes an effort to map current populations of the Kamehameha butterfly using observations submitted by the public, combined with surveys of remote areas by scientists. Pulelehua is the Hawaiian word for butterfly.

During a recent visit to the Pahole Natural Area Reserve in the Waianae Mountains on Oʻahu’s north shore, Cynthia King, an entomologist with the DLNR Division of Forestry and Wildlife (DOFAW) and Dr. William Haines, the principal investigator for the Pulelehua Project, search for butterflies and caterpillars. Another important goal of DOFAW and the project is to try and reintroduce the species in areas that have been restored or in places where its host plant (primarily, māmaki) can be outplanted and cared for. King commented, “Unfortunately because of the effects of introduced predators and habitat destruction, the butterfly has only been able to survive in patches of habitat, mostly in higher elevation areas and in the backs of valleys that have not been disturbed.”

Several days later and across the Central Oʻahu plain, in the northern Koolau Mountains, a helicopter ferries a different group of state, University of Hawai’i and U.S. Army researchers and a cultural practitioner to a tiny landing spot in the Poamoho section of the Ewa Forest Reserve.  From there, they hike through knee-deep mud on a narrow trail to the top of a ridge, where they visit an exclosure (an enclosure intended to exclude predators), built for another tiny creature. Currently only one small wild population of the Hawaiian tree snail, Achatinella lila, is known to persist in the wild.  On this day, this team of six, plans to reintroduce 50 of the snails, to try and establish a second wild population and the only protected one.

David Sischo, Snail Extinction Prevention Program Coordinator for DLNR/DOFAW, characterizes this first reintroduction of captive snails into the wild, as a “milestone for conservation.”  He said, “These snails are 4th and 5th generation snails, from the founder population of seven adult snails, first brought into a lab in 1997. Their new home is this predator-proof enclosure; the first to be built in this harsh summit region on any island.” 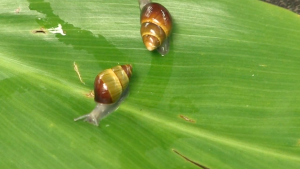 The team includes well known scientist and Nature Conservancy cultural advisor Sam Gon and Vince Costello, a Rare Snail Conservation Specialist with the Oʻahu Army Natural Resources Program.  For years the program has been instrumental in assisting with recovery efforts for rare tree snails. Sischo hands them and the other members of the team, a leaf with two to five snails clinging to it.  In a pouring rain, they gently nudge the snails onto the leaves of native plants. This is the first time out of the lab for these small creatures and you can see the glee on the faces of their human handlers. They ask one another if they can hear the snails singing.  Hawaiian folklore and custom suggests the snails are the voice of the forest, making them extremely important to the cultural practices of hula and chant.

There are 44 species of Hawaiian tree snail listed as endangered by the U.S. Endangered Species Act and there are countless others that aren’t listed but seeing tremendous declines in their populations and also at risk of extinction.

The Kamehameha butterfly and the Achatinella lila tree snail are but two of the creatures critical to the overall integrity and health of Hawai’i’s unique ecology and ecosystems. The loss of any one of these small creatures, is a great loss to our planet and that’s why there are concerted efforts underway to protect and perpetuate them.