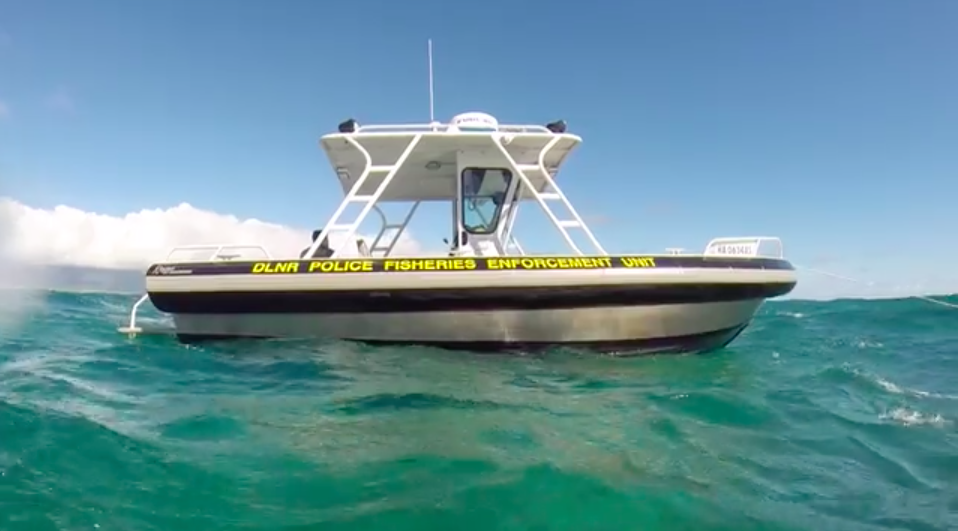 (Kahului, Maui) – The three DLNR Division of Conservation and Resources (DOCARE) officers, assigned to the North Maui Community Fisheries Enforcement Unit (CFEU) are all Maui natives. They have a real and special connection to the 17-miles of state-controlled ocean water on Maui’s north shore.  The CFEU, a partnership between the state with initial funding from Conservation International and the Harold C.K. Castle Foundation, was established to put sharp focus on a heavily used area; both by people recreating and by fishers.  It’s those who fish that Officers Jeffrey Kinores, Nathan Hillen, and Joshua Rezentes focus their efforts on. In the three years since the establishment of this special unit, they’ve been able to shift their attention from enforcement to outreach and education.  Also, while the first two years efforts were focused on illegal netting, the favorable weather conditions this past year saw officers shift to monitoring diving activity. In CFEU’s first year of operations (2013-2014), officers issued 41 total citations; 22 were for net violations. For the period beginning in 2015 and continuing until today, they issued 31 citations, including seven for netting violations and 14 for diving violations. That includes illegal take of lobster and undersized fish or exceeding bag limits.

During a recent CFEU boat patrol, Rezentes commented: “Most of our focus over the last couple of years has been informing and educating fisherman on our latest 2014 rules, which cover the goat fish species and our parrot fish species. We created these rules to protect those species because they’re most frequently harvested.”

Kinores is the supervisor of the unit and he feels changing fisher behaviors has allowed the CFEU to spend less time writing citations for violations in favor of educating them and conducting outreach activities with veteran and new anglers alike.  He cited a recent example. “We get a lot of night divers, particularly in the Kanaha area and we’ve been giving a lot of citations in this area. Just last weekend another DOCARE officer encountered a group of spear fisherman who’d recently been cited. After two weeks they were doing everything legally. They told the officer, ‘now we know, we don’t want to violate anything, we learned our lesson.”

Jason Redulla, the acting DOCARE Enforcement Chief explained, “The CFEU model is unique in that it allows a small group of conservation officers to really hone in on a common set of violations, attempt to change behaviors, and ultimately to further protect Hawai’i’s limited natural resources in a sustainable fashion.”  DLNR First Deputy Kekoa Kaluhiwa echoed Redulla’s sentiment and said, “The experience of the past few years and the success of the Maui CFEU team is prompting us to consider expansion of this model to other areas on other islands. We are pleased with the progress the Maui officers are making in reducing the number of violations through one-on-one contact with fishers in North Maui.” Officers have contacted nearly 1000 people at 11 different outreach events since the formation of the unit.

One of the major, well publicized initiatives that involved the Community Fisheries Enforcement Unit officers, was the development of rules to restrict the mass harvesting of sea cucumbers in Hawaiian waters.  It was the personal connection CFEU Officers have forged with community members that first brought the issue to their attention.  After getting emergency rules passed by the State Land Board to immediately shutdown mass harvesting on Maui and Oahu, DOCARE worked with the DLNR Division of Aquatic Resources, on a set of permanent rules which tightly regulate the numbers of cucumbers that can be removed from state waters.  Officer Hillen led the initial investigation and he said, “Without the engagement of concerned citizens this probably would not have happened…at least not as quickly.  It’s a perfect example of government and the people it serves working toward a common goal and it exemplifies what our entire department is trying to do with the DLNR & YOU brand.”