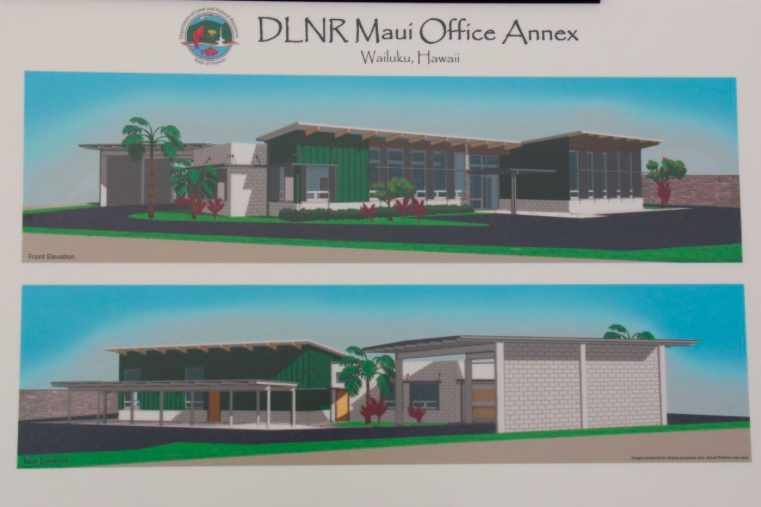 WAILUKU, MAUI —  A groundbreaking ceremony yesterday at the Maui Annex state building at 130 Mahalani Street is preparing the way for demolition of the 57-year old building, and construction starting in early 2017, of a new 7,000 square-foot building on the one-acre state parcel that has housed four divisions of the Department of Land and Natural Resources. 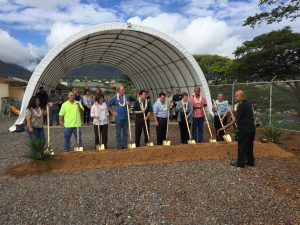 Construction of the new DLNR Maui Office Annex building will provide the DLNR personnel of the Divisions of Aquatic Resources (DAR), State Historic Preservation (SHPD), Land and Engineering offices with an updated facility that is designed to efficiently use the space within the triangular lot.

Pending completion of the new one-story building, the aquatic resources, historic preservation* and engineering offices have temporarily relocated to the Māʻalaea Small Boat Harbor building, where they opened for normal service beginning yesterday in the first floor portion of the Division of Boating and Ocean Recreation office building at 101 Māʻalaea Boat Harbor Road. Parking is available on the harbor property.  Phone numbers will remain the same:  DAR 243-5294; SHPD 243-5641; Engineering 243-5187. Mail for these offices should be sent to 101 Maalaea Boat Harbor Road, Wailuku, Hawai`i 96793. [*a previous news release erroneously stated that SHPD office would be located in the former Buzz’s Steak House restaurant. It will be co-located with Division of Aquatic Resources, downstairs from the DOBOR office.]

The new building will be larger than the previous building to accommodate the additional personnel that will be hired by DAR and SHPD, and the addition of the Maui Land Division staff.

Utility improvements on Mahalani Street adjacent to the property site are also part of the site improvements.

The new building will incorporate an energy-efficient design that includes building shading, increased ambient lighting, and a photovoltaic system to lower operational cost.

The redesigned conference room will be larger and have video conferencing capabilities which will provide improved communications between other DLNR offices throughout the State.

An outdated septic system will be replaced with a modern system that will be connected to the County municipal sewer system, which is better for the environment.

The design consultant firm for this project is The Limtiaco Consulting Group, and contractor is Maui Kupono Builders, LLC. The project construction cost is $7,875,000 and will take one to two years to construct, starting in early 2017.