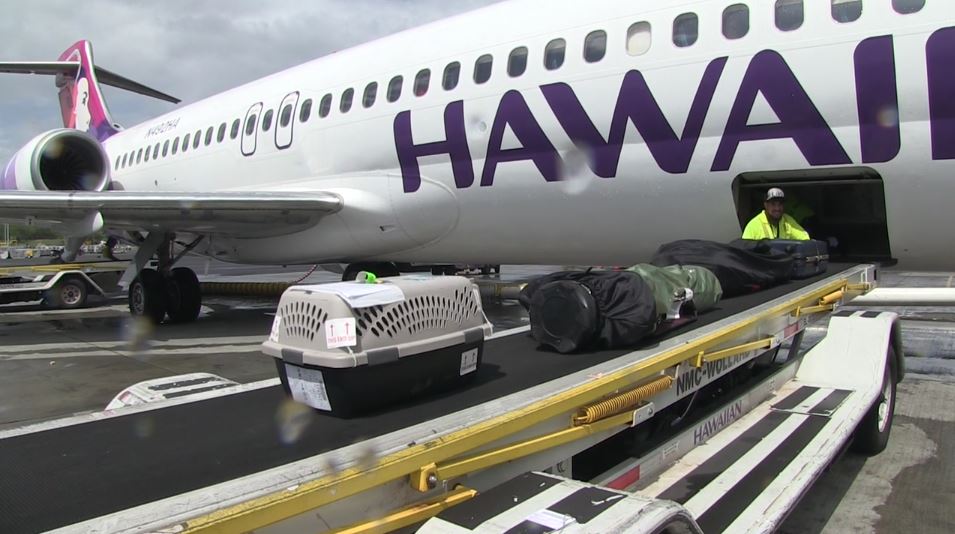 (HONOLULU) – The cargo handlers at Hawaiian Airlines, like anyone else who spotted it, thought a dog or a cat was in the carrier that arrived at Honolulu International Airport for shipping this morning.  Inside this particular crate was a pueo, or Hawaiian short-eared owl, that made headlines across the state recently after a seven-year-old Oahu girl, her father, and another man rescued it from the side of a road.  DLNR Division of Forestry and Wildlife (DOFAW) biologists and the veterinarian, who first treated the bird’s broken wing, believe it likely flew into some sort of line.

Today DOFAW biologists Afsheen Siddiqi and Jason Omick transported the injured pueo to the airport, to be loaded on a Hawaiian Airlines jet for the short-hop to Kona on Hawai‘i island.There, staff from the Hawai‘i Wildlife Center met it to begin its rehabilitation and physical therapy.  Siddiqi said, “At the moment the pueo is stable and it is more active than it was when it originally came in.  It is still receiving pain medications for its broken wing.” She explains the rehab experts will determine whether the bird can be released back into the wild.  If that doesn’t happen it could be sent to a zoo for educational display or in the worst case it could be put to sleep. That would happen if the pueo continued to need pain medications because its wing did not heal properly. No one wants the pueo to suffer indefinitely. Siddiqi believes its prognosis will be clearer in 2-3 weeks.

7-year-old Malia Rillamas spotted the bird sitting on the side of a North Shore highway on the afternoon of Jan. 15, 2017. She asked her dad Jonathan, to pull over.  Then another man, Brian Smith stopped and for the next 2 hours the trio watched over it, until an officer from the DLNR Division of Conservation and Resources (DOCARE) arrived to take it to Aloha Animal Hospital. For their efforts the Rillamas’ and Smith were presented with DLNR’s first-ever “Citizen Conservationist” awards. Young Malia became the toast of her classmates and asked if she could name the Pueo? DLNR/DOFAW biologists said sure, and she named it “Sunshine,” or Pa ‘ana a ka la.

Due to their declining population the pueo is classified as endangered by the DLNR on O‘ahu only. The species is also protected statewide by the federal Migratory Bird Treaty Act.