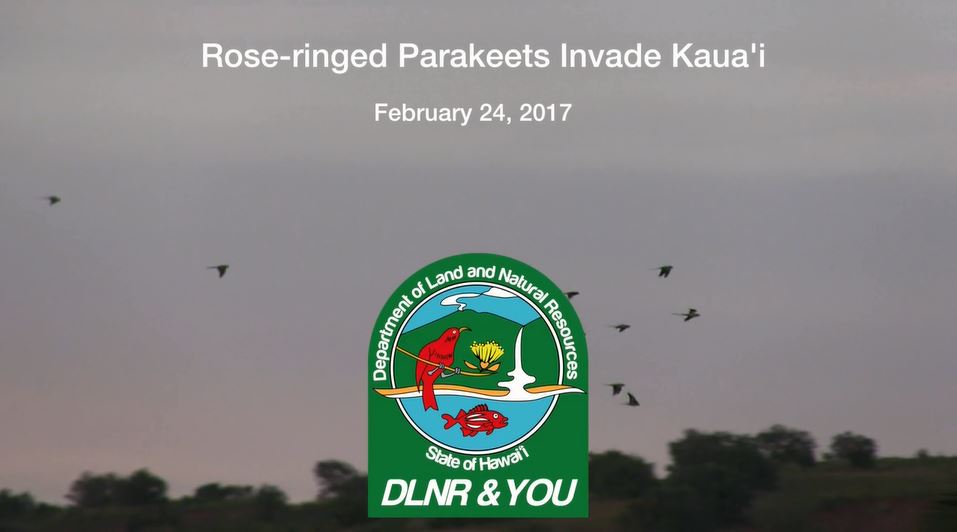 (Lihue, Kaua‘i) – It’s another spectacular sunset near Spouting Horn on Kauai’s south side.  As people gather at the shoreline to catch a glimpse of the fabled green flash, their eyes turn inland for the green flash in the sky. This is the nightly invasion of rose-ringed parakeets. Their highly visible presence on the Garden Island provides a current and dramatic example of how a seemingly innocuous species, left unchecked and over time, can become a public health hazard, a real nuisance, and have serious impacts on the economy and the environment.

Kaua‘i County Council Member Derek Kawakami explained, “What turned out to be a novelty and something we’d kind of entertain ourselves with while we watched them roost in the evenings, turned into a nuisance once our farmers approached us and started saying, hey as cute as these birds are, they are very destructive to our lychee and longan crops. Increasingly we’ve been hearing more and more concerns from our farmers, our gardeners, from people who live in these neighborhoods; that unfortunately play host to these rose-ring parakeets. “

They’re also known as the ring-necked parakeets. Kawakami is one of numerous government representatives fielding calls about what’s become the most visible invasive species on Kaua‘i. Rewind to circa 1968 and Bill Lucey of the Kaua‘i Invasive Species Committee shared what he learned. “We did research through the Bishop Museum and discovered there was a bed and breakfast somewhere in Lāwaʻi and they brought in some rose-ringed parakeets and clipped their primaries and had them sort of hanging out free by the front porch and around the B&B.  They got away from there and started establishing themselves at some point after 1968.” Figuring out what to do about this marauding, winged invader has become a top priority for Lucey, his team, and many others around the Garden Island. He explained, “Parakeets are what we call a slow invader actually, since they’ve been here for 50 years or so. They don’t really exhibit a fast explosion until they reach a critical mass. So for a number of years there were 50 or a few hundred and then over time they reached the point where there are a few thousand and then they’re all having off spring. At that point it becomes a very strong invasion and the invasion curve starts increasing rapidly.”

Current estimates put the rose-ringed population at around 5,000 birds. That’s plenty to cause big headaches for Kaua‘i’s agricultural seed companies, small independent farmers, backyard growers and condo owners. Learn their stories and see the damage this efficient winged army is causing environmentally and economically, and you begin to understand why so many people are so concerned and want strong measures for a counterattack.

Junior Extension Agent Kathryn Fiedler with the University of Hawai‘i College of Tropical Agriculture and Human Resources (CTAHR) is one of the front-line experts now tracking the damage the parakeets are causing. She says she’s never seen such intense flocking and added, “It’s really astounding the damage they can cause. Rose-ringed parakeets are a small bird.  You wouldn’t think they could do too much. We’ve seen some homeowners have an entire tangerine tree striped in one day.  It’s quite extensive actually. The problem is they are birds and they bring in other diseases as well, so even if you see just a little bit of feeding it pretty much ruins the crop around it too. So they physically remove the fruit and also contaminate fruits and vegetables as well.”

Farmer Jerry Ornellas confirms that saying, “We definitely have the issue of food safety. These birds will land in the tops of the trees, they’ll poop and if any of their droppings gets onto the other fruit… even if it hasn’t been damaged by the birds, you have to discard that fruit. And if you ever get a food safety audit and they see birds in the trees, you’re in trouble. You’re not going to pass the audit.” In 2016 Ornellas said he lost 30 percent of his crop to the parakeet or about six thousand dollars. He also verifies that like any strong invasion force, the parakeets utilize advance scouts and choose lofty look- outs. “They don’t like to hang on the sides of the trees. They don’t like to be vulnerable apparently so they like to perch where they can see what’s going on. So they’ll take all the fruit off the top of the tree, which is the best fruit because it gets the best sunlight and sizes up pretty well.” Farmers like Ornellas are using netting to try and protect their crops. It works okay for low growing fruits and vegetables, but is expensive and tough to put on broad, towering trees like lychee.

Outside the CTAHR office in Lihue, farmer Gary Ueunten holds a hollow shell. It’s all that’s left of a once ripe lilikoi, another of the bird’s many favored pickings. On his farm in Lāwaʻi he explains, “The parakeet invasion started about four or five years ago. The first crop they started doing damage on was lychee and they devastated my lychee for one season when we had a lot of fruit. The next season I used wax bags from Japan until they figured out they could eat right through the bag so that didn’t work. Then I went to netting, the black netting, but that’s really cumbersome and hard to put on trees. And it also will catch other birds and that’s not desirable.” He says a flock of parakeets can wipe out an entire tree overnight.

Vast fields of seed corn on Kaua‘i’s west side are also being victimized by these voracious eaters. Large agricultural interests the Syngenta Corp. have been forced to spend tens of thousands of dollars to protect fields of corn from the birds. Syngenta’s site manager on Kaua‘i Robin Young, surveys long rows of corn now draped in huge, beige nets. It’s the company’s costly response to the invading parakeets.  Young remarked, “Oh it’s devastating. For example the field I’m standing in is about a 2 ½ acre field. I started noticing the parrots coming into the area about two weeks ago; at first maybe four or five of them. I watched them every evening. I wasn’t too concerned until about five days ago they came in by the flocks. There were probably about 500 out in this field I’d guesstimate.”

From the corn fields, to fruit farms, to condo complexes around Poʻipū many people have developed a quick and dramatic change of heart about the rose-ringed parakeet. No longer viewed as pretty, smart, and interesting birds to observe, the parakeets are now seen as public enemy number one in some corners of Kauai.

At the Prince Kuhio Condos near Spouting Horn, manager Matt Drake and homeowner’s association president Jack Barnard detail the horrible and unhealthy messes the parakeet flocks leave in their wake. Until they started using some tools of modern warfare, like drones and lasers, to try and scare dozens of birds out of Royal palms and other trees each night, they felt powerless. Drake explained, “Originally when they first showed up it was about four hours a day of just poop clean up on our property.

Since we’ve started shooting lasers at the tree tops we’ve whittled it down to two hours a day and flying a drone as a deterrent, we’re actually down quite a bit with that as well.” The complex had to cut down three trees around the swimming pool to keep the deck and the water from being covered in bird droppings. Barnard said, “It seems, if you’re successful in winning one battle they simply take flight and the fight elsewhere, using surprise to their advantage. One day there were no parakeets and the very next day our entire property was covered in droppings. It happened overnight and it was very overwhelming.”

Across the road at the Kuhio Shores Condominiums, manager Albert Fernandez joked, “If you were to rent a black convertible, the next day it’s going to be a white splattered convertible.”  The palm trees lining the property are favored roosts for the birds so Fernandez said he had the trees butchered to try and prevent landings. Most now have three or four short, vertical palm fronds remaining. Fernandez adds, “We had to do a lot of serious haircutting and then we had to butcher those palm trees. Boy, it doesn’t look good after we trimmed those. It’s just a small spike sticking up there and a lot of our tourists don’t really understand why our palm trees look like that. Normally they don’t look like that, but that’s the only solution. We had to temporarily cut down on the poop.”

Temporary measures are the best anyone can take now, while various agencies search for permanent solutions, hoping for broad governmental support to reduce the population on Kaua‘i, and have control measures in place before the rose-ringed parakeets expand their territory. Council member Kawakami said, “I can only speak for myself and some of my colleagues that we have recognized this is a problem and we’re looking toward a collaborative effort between county, state, and federal governments. It is going to be an on-going issue. We don’t want to see this thing turn into another coqui frog, where we could have addressed it early, before it turns into some kind of catastrophic event.”

It could be catastrophic on numerous levels if the birds fly higher and higher into the mountains and begin impacting native plants and watersheds. Thomas Kaiakapu, the Kaua‘i Branch Wildlife Manager for the DLNR Division of Wildlife and Forestry is one of the biologists monitoring the bird’s potential movement mauka. “Right now they’re in the lowland areas of Kaua‘i.  But if they start to move into the upland mountains, that’s a concern for us, because that’s where most of our native species thrive. Left unchecked and uncontrolled the parakeet population here could explode to more than 10,000 birds in the next five years,” Kaiakapu explained.

Numerous other places, particularly northern European countries, are also dealing with out-of-control parakeet populations. DLNR Chair Suzanne Case concluded, “If there’s a silver lining to this story we hope it raises awareness about the impacts of invasive species on Hawaii’s environment and economy. In the case of the rose-ringed parakeet, we’re seeing the detrimental effects right now and this will only get worse the more their numbers increase and they invade additional territory. We’re committed to working with all of our partners and the state legislature to address this issue.”

People across the state are recognizing Hawai‘i Invasive Species Week this week, with outstanding volunteers in the fight against invasive species to be recognized at a State Capitol ceremony in early March.