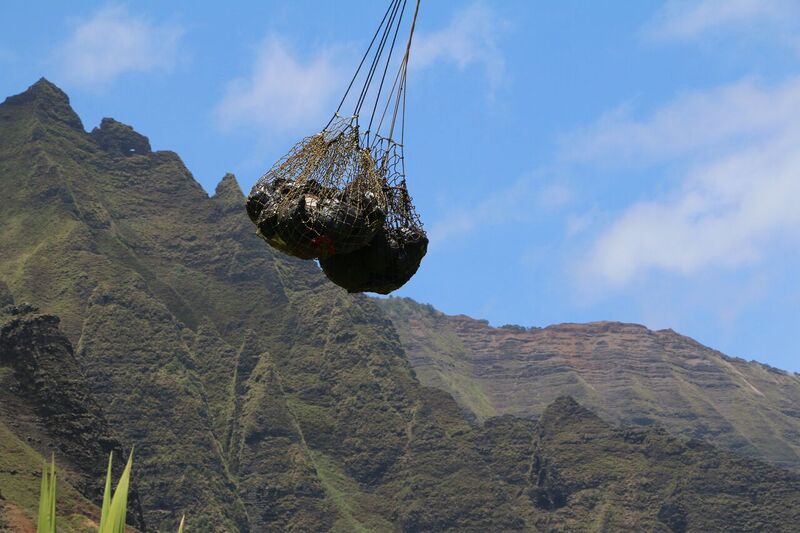 (Lihue, Kaua‘i) – Since the first of this year, DLNR Division of State Parks maintenance staff on Kaua‘i have gathered, bagged, and airlifted 10.92 tons of rubbish from the Kalalau section of the Napali Coast State Wilderness Park.  At least monthly, regular clean-up operations, have resulted in between 520 pounds and 2380 pounds of trash and waste being airlifted by helicopter out of the area. During some months maintenance crews conducted two-to-four operations.

“Clearly this huge quantity of rubbish was not carried in on the backs of people who obtained permits to hike the 11 miles into Kalalau,” said State Parks Administrator Curt Cottrell. “Over the past two years we’ve made significant progress in dismantling illegal, long-term camps both at Kalalau beach and in more remote locations in Kalalau Valley. In collaboration with the DLNR Division of Conservation and Resources Enforcement (DOCARE), we’ve made it very clear that we have zero tolerance for illegal activity in our state’s largest and most remote state park,” Cottrell added.

In June alone, during five clean-up days, helicopters sling-loaded nearly seven thousand pounds of trash and waste out of Kalalau. Human waste is shoveled into barrels out of composting toilets in the designated camping area fronting Kalalau beach and flown out for proper treatment and disposal.  State Park staff continues to be concerned about environmental degradation and health risks associated with people defecating in the forest and along the streams in the park and the associated impacts to archeological sites from being modified for camping uses.   “These are the critical reasons diligent attention must be directed to eliminating illegal activity at Kalalau and elsewhere in the Napali Coast State Wilderness Park.  As an example, by enforcing the limit of campers to the allowed 60 people each night, the composters should function as designed and our maintenance crew can turn their priorities to other site enhancements,” Cottrell said.

Regular monthly maintenance operations are conducted not only to clean-up the rubbish left at illegal camps and to remove human waste, but also to trim weeds, maintain signs and camp trails, and restock comfort stations.  The Division of State Parks plans to renew its request to the Hawai‘i State Legislature next year for permanent staffing at Kalalau to ensure higher quality of maintenance of the park’s wilderness character, protect cultural sites and to provide visitor information, as well as to maintain communications capability in case of emergencies and to report illegal activities to enforcement.