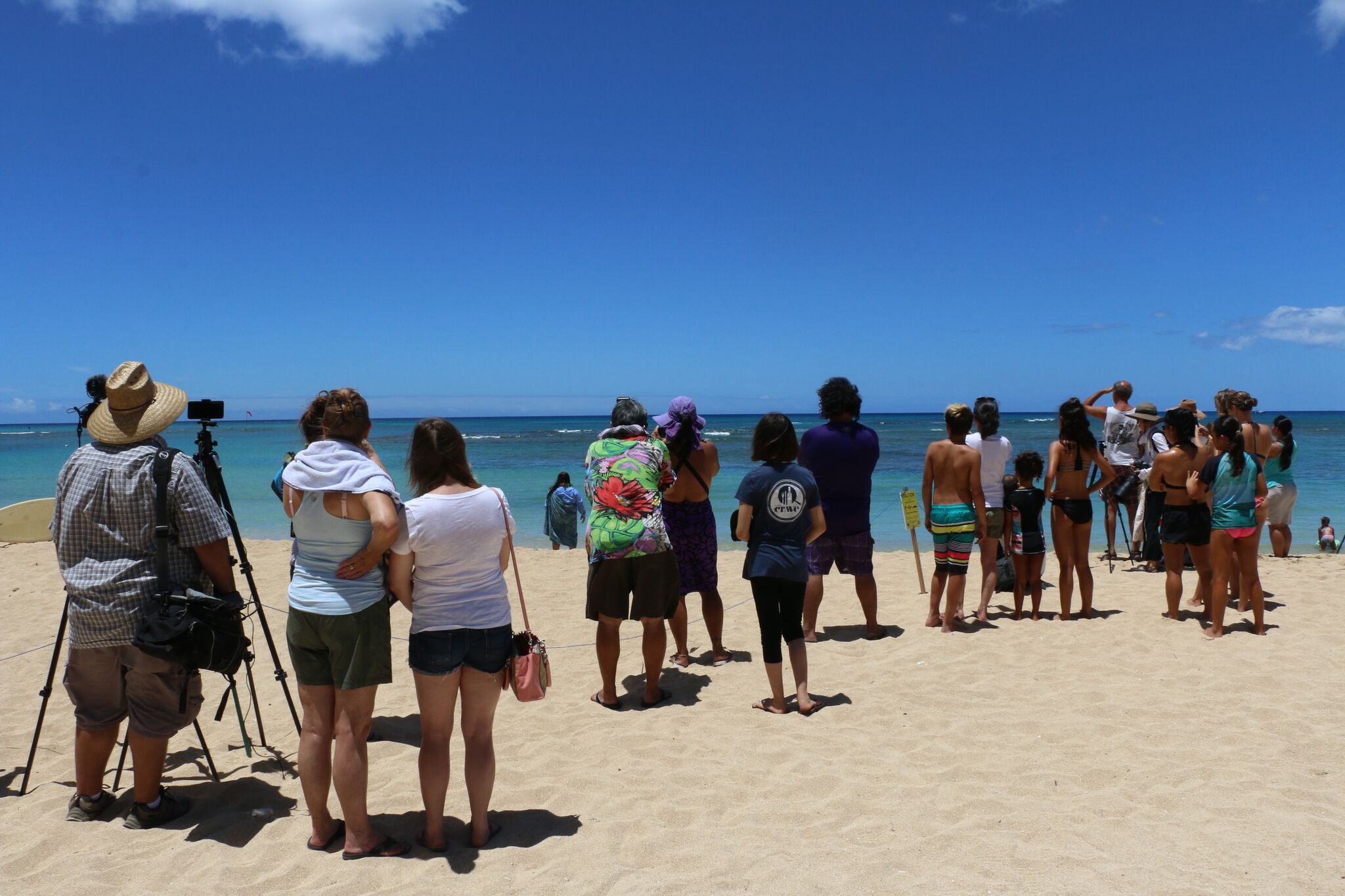 (Honolulu) – The Hawaiian monk seal pup, PO3, born on O‘ahu’s Kaimana Beach in late June will be relocated to a remote, undisclosed shoreline area where she can continue her natural growth as a wild seal with less human interaction and other hazards. The decision to move the seal was made following extensive discussion and analysis by experts, managers and scientists from the National Oceanic and Atmospheric Administration’s (NOAA) National Marine Fisheries Service (NOAA Fisheries); the DLNR Chair’s Office and its Divisions of Aquatic Resources (DAR) and Conservation and Resources Enforcement (DOCARE). Other agencies involved in managing public and seal safety during its time at Kaimana include the City and County (C&C) of Honolulu Emergency Services Department, Division of Ocean Safety and Life Guard Services, C&C Dept. of Parks and Recreation, the Honolulu Mayor’s Office; and Hawai‘i Marine Animal Response (HMAR).

“This large and expert team of people from all levels of government, carefully considered options for this seal (now named ‘Kaimana’) after it weans from its mother (‘Rocky’),” said DLNR Chair Suzanne Case. “The determination was made that the risks of leaving this now famous seal in place are too great.  The team considered a number of factors and the risks of leaving ‘Kaimana’ at her natal beach outweighed the risks of relocating her,” said Chair Case.

David Schofield, NOAA Fisheries Regional Marine Mammal Response Coordinator explained, “We weighed two options with utmost consideration for safety; both for the seal and the public. One option was to simply leave the weaned seal at Kaimana Beach. The other, our chosen option, is to move the seal to a more secluded location, where she can grow up naturally in the company of other wild monk seals, without a high level of human inter-action.”

Not the least of those risks at Kaimana Beach is the seal’s propensity for swimming into the badly dilapidated Natatorium adjacent to Kaimana beach at least three times.  First on Friday, July 28th, Kaimana disappeared from her mom and was then spotted in the Natatorium’s pool. NOAA staff and volunteers managed to rescue her and hand-carry her back to her mother after a forty-five-minute long separation. Then again, on Thursday, August 3rd, both ‘Kaimana’ and ‘Rocky’ found their way into the large Natatorium pool, replete with unseen, underwater hazards.

During an impromptu news conference on the beach that day, both mom and pup finally exited the Natatorium and swam a bee-line for the center of Kaimana Beach.  C&C lifeguards, NOAA Marine Mammal Response Team Members, DLNR representatives, and HMAR volunteers quickly cleared the beach and the water to give the returning seals wide berth. Again last night both mom and pup swam into the Natatorium and later exited without issue.

Jim Howe of the Honolulu Emergency Services Dept. observed, “Ever since Rocky gave birth to her pup at Kaimana Beach, city lifeguards have been focused on the safety of beachgoers as well as these remarkable animals. I want to thank all of the lifeguards and our federal and state partners who remained vigilant over the past 40 days while Rocky successfully weaned her pup.”

Dr. Bruce Anderson, DAR Administrator explained, “Once a pup weans from its mom it begins exploring and learning to forage for food further away from her birth site. Young seals are extremely impressionable and if Kaimana was exposed to extensive human interaction, she will likely develop unhealthy behaviors. If a seal does become conditioned to people, as it gets older, bigger and more powerful, people in the water sought out by a seal can and have been badly hurt.” Anderson continued, “One handout from a well-intentioned human and Kaimana may become troublesome and need further relocations and controls which put her further at risk.”

DOCARE Enforcement Chief Robert Farrell added, “This decision to relocate is not made lightly, as there are human-caused dangers elsewhere too, not the least of which is illegal unattended lay gill nets that have caused the sad drownings of four seals in recent years. We know lay gill nets are a real problem for monk seals, turtles and other animals that all too frequently get entangled in them and die because they can’t breathe.  We ask everyone to help us be extra vigilant in reporting these dangers through our new app, DLNRtip or by calling the DOCARE hotline at 643-DLNR.”

‘Rocky’ and ‘Kaimana’s’ long stay on one of Waikiki’s most popular beaches became a tourist draw and an Internet sensation.  HMAR President Jon Gelman says the non-profit’s response to this pupping event on a busy Waikiki beach was a test of the organization’s resources and commitment.  “Our folks are there to conduct public outreach and help seals have a safe, quiet place to rest and care for their pups. I think our volunteers and staff have done a great job and we have had the opportunity to educate thousands of residents and visitors while at the same time managing safety perimeters, monitoring the mom and pup’s behaviors and maintaining appropriate separation between the seals and humans in an extremely challenging environment.”

“We are so thankful and blessed that ‘Rocky’ birthed ‘Kaimana’ here in our ahupua‘a. She has been a true gift from our Akua to the residents and visitors of Waikīkī who had the opportunity to learn from her, and we are honored she will now carry the name of the place where she was born,” said area descendant Trisha Kehaulani Watson. “As Hawaiians managed natural resources in a custom that ensured sustainablity, we agree with NOAA, DLNR and other officials that the best management decision for ‘Kaimana’ and the 60,000 daily resource users is to relocate her as soon as she has weaned from her mother.”

All of the government partners want to ensure that both visitors and residents are informed about safe and proper seal and other wildlife viewing procedures. Several videos have been produced regarding safe wildlife viewing and the media has provided extensive coverage of ‘Kaimana’. A news conference today concluded with a blessing sending young ‘Kaimana’ to a long and wild life.