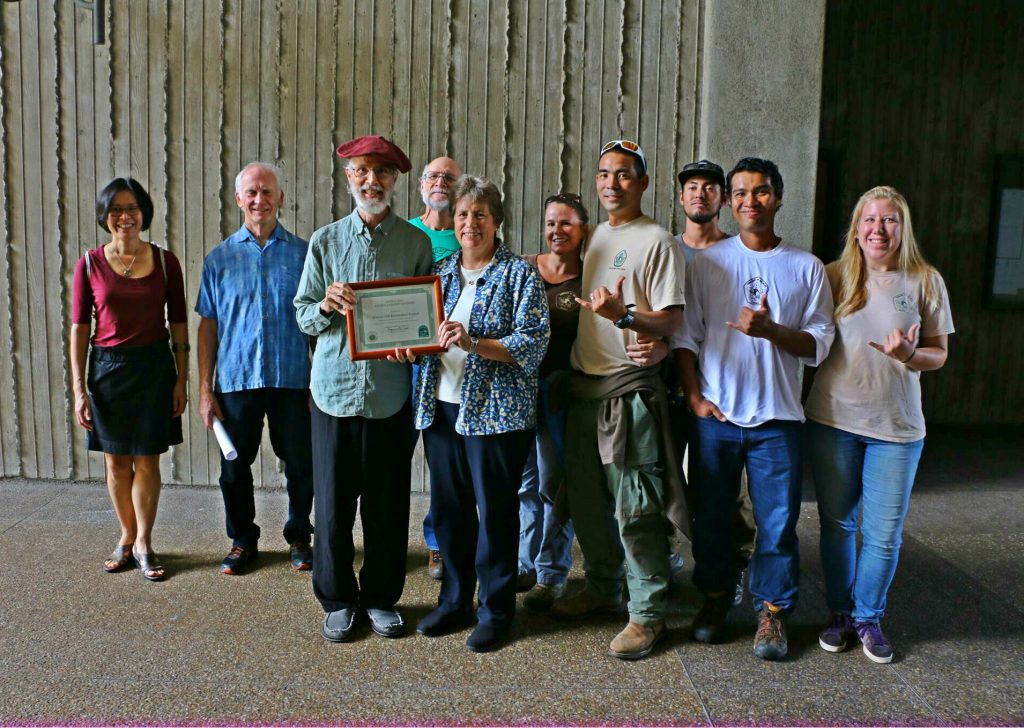 (HONOLULU) – Every Sunday morning, for the past twelve years, members of the Mānoa Cliff Restoration team trudge up the Mānoa Cliff Trail in the Honolulu Watershed Forest Reserve to begin another day of work. This is a labor of love; one born out of concern for the health of native forests being choked out by invasive species.

Brandon Stone is one of the founders of the volunteer group and he explained, “After hiking and botanizing for years all over Hawaii, Mashuri Waite and I were looking for some way to combat the overwhelming tide of invasives in our native forests. Mashuri found our current site on the Mānoa Cliff Trail, where we could see a diverse native forest hidden under a heavy cloak of invasives. After getting a permit from DLNR, we began to liberate the good stock of natives struggling to survive there. The idea was simple: remove the invasives to let the natives thrive and spread natives throughout the site by planting seeds from the area. By removing an invasive cinnamon tree, for example, a native koa could get more sunlight and nutrients and begin to grow more freely and beautifully. As friends joined us over the years, each one with different interests and skills, our group has turned many areas of the site from predominantly invasive to predominantly native. How different from when we began more than twelve years ago!”  The group has documented 110 native plant species in the area, compared to 115 non-native species.

DLNR Chair Suzanne Case frequents the trails in the area and noticed the dramatic change in the six acre plot from one of weeds and non-native plants to a diverse and thriving garden of koa, mamaki, Olona, ‘ohia wai, papala and hibiscus.  Case recommended the group as the third recipient of the DLNR & YOU Citizen Conservationist award, saying, “It is impossible for government to address all of the pressing needs necessary for protecting and perpetuating Hawai‘i’s special and unique natural and cultural resources.  The Mānoa Cliff Restoration group, works quietly and steadily behind the scenes, every single week to improve a small slice of paradise. They provide a great example for what individual citizens and formal or informal groups can accomplish on behalf of conservation in Hawai‘i.”

The DLNR & YOU Citizen Conservationist program was conceived during the Sept. 2016 IUCN World Conservation Congress in Honolulu, after a family from O‘ahu’s north shore rescued a downed pueo (Hawaiian short-ear owl). They received the first award.

Then, Hawai‘i Volcanoes National Park ranger Noah Gomes was recognized for his research that led to the naming of the endangered native Hawaiian Creeper as the ‘Alawī. DLNR accepts nominations for the citizen conservationist awards program from staff and any other individuals or groups.