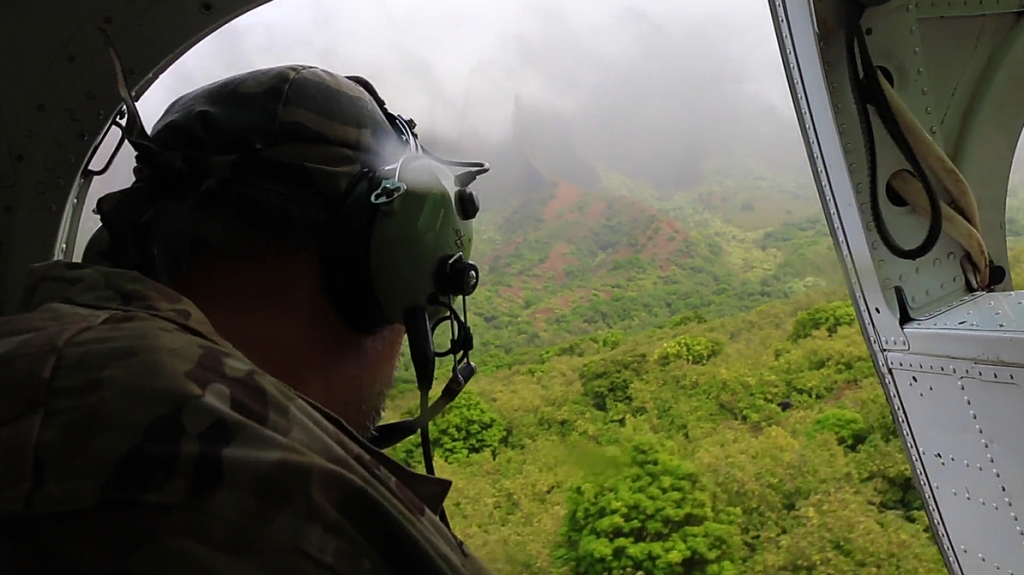 (HONOLULU) –  Each time a team of officers from the DLNR Division of Conservation and Resources Enforcement (DOCARE) flies into the Kalalau section of the Na Pali Coast State Wilderness Park, they find fewer illegal camps and write fewer arrest citations to people in the area without required permits. As Hawai‘i’s largest and most remote state park, it is in the best shape in decades, due to the concentrated efforts of DOCARE and the DLNR Division of State Parks, which manages it.

During the latest sweep of Kalalau Valley and the designated camping area along Kalalau beach officers cited three people who didn’t have permits. They also spotted 4-5 illegal camps hidden in the thick forest of the valley…one camouflaged with leaves and branches to make it harder to spot from the air. The team of four officers dismantled a squatter camp in the designated camping area and a State Parks maintenance team had hoped to bag it up the next day and fly it out along with other accumulated rubbish. Proving the persistence of some long-time squatters in the area, the camp was re-established by the time maintenance workers got there the following day.

Beginning in late 2015, DOCARE officers began making unannounced, regular enforcement visits to the stunning park and over the course of the past 24 months arrested hundreds of people contacted in the Kalalau beach and valley areas. Most of those illegal campers were given a citation and ordered to appear in court. However, a few had to be taken in to custody and transported directly to jail. Their efforts are augmented by at least monthly clean-up and maintenance visits from a Kaua‘i-based State Parks maintenance team.

The Department of Land and Natural Resources has received numerous letters from people with permits to travel and camp beyond the two-mile-marker at Hanakapiai stream. Daniel and Jennifer McCoy of Washington State visited Kalalau for five nights in May, shortly after DOCARE officers swept the area and arrested 11 non-permitted squatters.  They wrote, “This completed our fifth experience…Upon our arrival into Kalalau we immediately noticed many positive changes.  Missing were many of the long-time “residents” that often added an unwelcoming atmosphere to the place, making us feel like we were encroaching on their territory. Gone were the unsightly piles of rubbish generated mostly by those same people.” The McCoy’s added, “We’d like to commend the efforts of your department to keep this precious and sacred place in unspoiled condition, so people like ourselves can experience this piece of heaven on earth.”

In correspondence received last month, Leesha Kawamura of Kaua‘i wrote, “I, along with six other friends went hiking into Kalalau.  I have not been there since 2014.  I was pleasantly surprised to see how clean the place was compared to the last time.  When I first visited and hiked it, it was 2014, I thought it was beautiful but I was sad and disappointed at the abundance of people there and the amount of trash that was piled up…I’m glad the DLNR has done the tough work in enforcing permitting as it is evident that taking care of our aina is our responsibility.”

Curt Cottrell, Division of State Parks Administrator explains that due to the remoteness of the Na Pali Coast State Wilderness Park, State Park crews must contract helicopter services to airlift both rubbish and the excessive human waste from the camping composting toilets.  “If we continue to vastly reduce, and ideally eliminate, the illegal transport of camping paraphernalia and unauthorized campers into Kalalau by illicit boat and jet ski operators, and enforce permit conditions for the hikers that come in by trail –  reducing the expense of keeping the camping area, Kalalau Valley and beach as intended: as a wilderness. Nonetheless, State Parks will continue to request funding and positions from the state legislature for the NaPali Coast State Wilderness Park to ensure that permit conditions are honored and the quality of both the resource and experience for local residents and visitors is further enhanced. We intend to build upon the enforcement efforts of the last 24 months.”

And Robert Farrell, DOCARE Enforcement Chief commented, “Clearly our focus on enforcing permit rules for the Kalalau area is having the desired result.  During our latest enforcement sweep last Tuesday, officers only arrested the three unpermitted campers.  This is in sharp contrast to a year ago and two years ago; when it was common for officers to find dozens of illegal campers during a single day visit.”

DLNR Chair Suzanne Case applauded the consistent efforts of both State Parks staff and DOCARE.  “It’s tremendously heartening to receive letters and e-mails from people who’ve had positive experiences in the Na Pali Coast State Wilderness Park. It helps reinforce that the hard work being done by our parks folks and enforcement officers is paying off and we’re very much closer, than ever before, to restoring the park to its pristine wilderness character.”