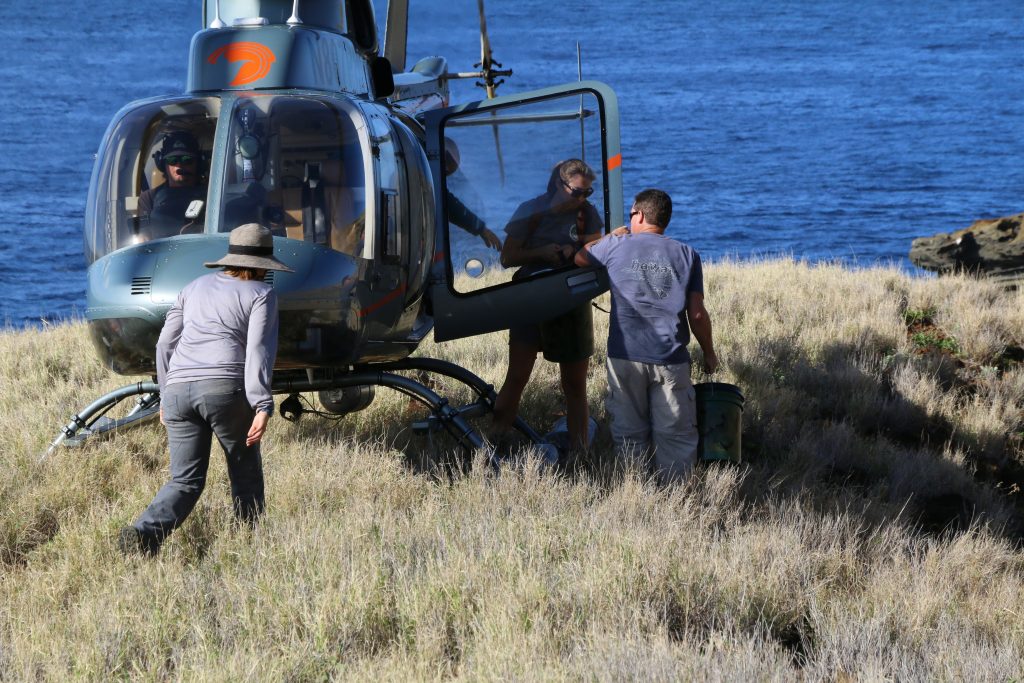 Human observations using a variety of other monitoring devices last month did not detect any sign of rodents.  Post-project monitoring followed last August and September’s trio of applications of a rodenticide aimed at ridding the island of the introduced, invasive, harmful Pacific rats to protect native seabirds.

Camera cards which had been deployed by KESRP for a seabird research project were reviewed last week after Christmas and revealed images of two rats. KESRP staff immediately reported the photos of two rodents, of unknown species, to DLNR and IC.

Island Conservation, the non-profit contractor experts helping the Lehua rat eradication project through the broad partnership represented by the Lehua Restoration Project Steering Committee, and the KESRP currently have a host of detection devices, including motion-activated cameras placed at strategic locations across the tiny island, a state seabird sanctuary.

Dr. Andre Raine of KESRP noted last month that monitoring teams conducting various investigations throughout the fall, using numerous detection devices, had not detected any visible evidence of rats.  Raine said, “These cameras are highly effective critical early warning tools for locating any remaining rats. They did their job and we can now target areas for a swift response to hopefully deal with whatever rats remain on the islet. As we’ve said before, we cannot say the rats are truly gone until the island has been given the all clear for an entire year. That’s part of the protocol created by the eradication team, and is internationally recognized as the appropriate way to monitor projects such as these.”  A peer reviewed publication pointed out that eradications using the same rodenticide used on Lehua succeed four out of five times.

Mele Khalsa of Island Conservation is leading the rapid assessment team on Lehua.  “Our primary goal was to assess the distribution and abundance of any rats that may be on Lehua. These data are critical to inform any management steps we need to take,” she explained. “After seeing these two rats on camera, we collected, immediately reviewed, and noted locations of any additional images the cameras may have picked up.”  After reviewing camera cards on Tuesday no additional rat images were found.  In total, the team placed a total of 134 monitoring devices on Lehua, including three different types of traps. Some of the devices will be left in place; others will be re-established when monitoring teams return to the island. After leaving Lehua the team will meet with project managers to assess a suite of additional treatment options including localized hand-applied rodenticide application.

The teams use five different types of detection devices including tracking tunnels that use ink pads to detect footprints; wax chew blocks; live, snap and GoodNature traps; camera traps and bait piles. Other than the two rodents caught on camera, none of the devices have detected rat presence since the rodenticide applications began.

Monitoring protocols in place for the eradication program call for Island Conservation monitoring teams to travel to the remote island every other month.  This week’s rapid response is in advance of a previously planned bi-monthly monitoring trip in mid-January.

DLNR Chair Suzanne Case said, “While we are clearly disappointed to see evidence of two rats on the island, we are very lucky our partners (KESRP) were able to detect them. We knew from the beginning there was the possibility that a few rats could linger. Now it’s important to address this.”  KESRP seabird monitoring of Lehua has been underway for many years separate from monitoring for the rat eradication. While their cameras are aimed at seabird burrows and nests they are serving to bolster the monitoring for the eradication.

The invasive Pacific rat is a voracious predator on the eggs, chicks and even adult birds that currently breed and nest on remote Lehua. The restoration project team has stated repeatedly that the project will not be considered a success unless every invasive rat is removed from the ecosystem, and that will take a full year after the final application to say for sure. The goal of the Lehua Island Restoration Project is to provide safe, predator-free breeding habitat for native seabirds and other species so they may thrive again.