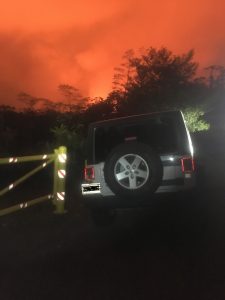 (HILO) – Officers from the DLNR Division of Conservation and Resources Enforcement (DOCARE) and other law enforcement agencies have adopted a zero-tolerance policy toward anyone who violates closures in the disaster area associated with the current eruption of Kilauea and associated lava flows.

Last night, a New York State couple bypassed a security check-point on Highway 132, parked outside of Lava Tree State Monument which is closed, and then walked into an area of intense active lava flow.  The man and woman told DOCARE officers that a local resident told them how to get around the check-point. The pair was cited for loitering and refusal to evacuate during a pending disaster.

Officers also report that a boat tied up at the closed Pohoiki Boat Ramp was unable to return to the Wailoa Small Boat Harbor in Hilo.  The owner of the boat received three citations for various boat safety equipment violations.

All of the citations issued last night are petty misdemeanors, but can carry higher penalties because they happened during a disaster situation.

Acting DOCARE Chief Jason Redulla said, “The volcano emergency is an ever-changing situation and people who ignore closures and warnings from police, fire and civil defense authorities not only put themselves in potentially life-threatening situations, but they are doing the same to our officers and emergency first-responders.