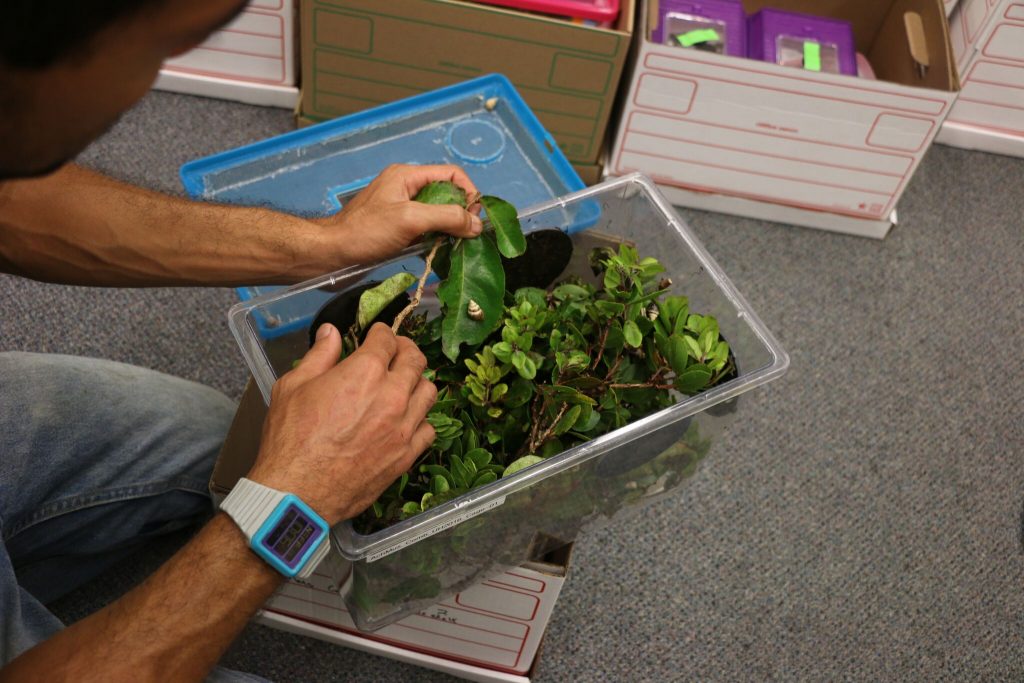 Protecting All Creatures Great and Small from Hurricane Lane

Many of the snails are so critically endangered that they are the last of their kinds on the planet.  Take for instance “George” (Achatinella apexfulva), the last remaining member of its species in captivity.  Cynthia King, DOFAW entomologist said, “Just one is left so we really want to make sure that this species stays safe for as long as possible in the event he is able to reproduce.”  Other native snail species number in the 10’s and hundreds. King wondered, “Why is it that we’re running around at the last minute trying to save snails?  They are biologically important as ecosystem processors and they’re also important in Hawaiian culture.  They’ve evolved over millions of years, they have a place in the forest, they have a place in these islands, so we want to be sure we have them here for as long as possible.”

The major concern is that team members might not have been able to reach the snails at Kawainui if the roads got blocked or the power went out. Kupa‘a Hee, the O‘ahu Field Coordinator for the program will spend tonight serving as a nursemaid to the snails, housed in 80 crates.  He said, “Our main concern is humidity and secondly the temperatures.  These snails persist at the summit regions of the Ko‘olau and Waianae mountain ranges, where the temperatures are between 65 and 68 degrees and there’s a lot of mist, morning dew, and rain. Many of these snails are critically endangered so we are on high alert to protect them.”

A portable air conditioner has been set up in a 2nd floor suite of offices at Kalanimoku to try and keep temperatures cool.  As a back-up, there are 80 bags of ice in coolers that can be placed around each cage. At least three times each day, Hee sprays reverse osmosis water into each cage to try and duplicate humidity levels found in the lab at Kawainui and in their native habitats in the mountains.

As soon as Hurricane Lane is no longer a threat to O‘ahu and to these smallest of native creatures, their trip downtown will be reversed and they’ll return to their  climate-controlled environment at Kawainui with hopes that their numbers will continue increasing.