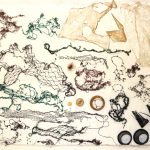 (HONOLULU) – Marine debris, ingested by a 56-foot-long sperm whale, is believed to be at least a contributing cause to its death. The whale washed up on the reef fronting Lydgate Park on Kaua‘i Friday night. On Saturday, heavy equipment was used to get it onto the beach where researchers from the University of Hawaiʻi at Mānoa Health and Stranding Lab, spent 15-hours trying to find clues about its death. Their initial examination of the whale was limited because of its immense size. 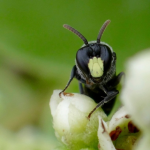 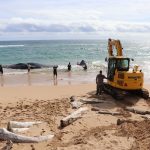 (KAPA‘A, KAUA‘I) - The cause of death of a 56-foot-long, 120,000-pound sperm whale, that appeared on the reef fronting Lydgate Park, won’t likely be determined for some time. 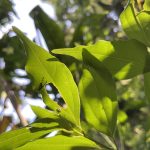 (Hanapēpē, Kaua‘i) - The Kaua‘i Forest Bird Recovery Project (KFBRP) is holding its annual Hawaiian blessing for the 2023 field season, which for at least two species of Hawaiian honeycreepers is a critical year. 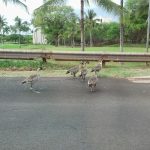 (KAHULUI) – A female nēnē was struck and killed by a passenger truck on Haleakalā Highway near the Dairy Road/Keolani Place junction in Kahului last Tuesday. This outcome has become too familiar in recent years and the DLNR Division of Forestry and Wildlife (DOFAW) wants to bring awareness to Hawai‘i residents that these human-caused deaths are preventable.

(HONOLULU) – Forestry and agricultural interests have been intertwined in the Hawaiian Islands since well before statehood.

(Pu‘u Maka‘ala Natural Area Reserve, Hawai‘i) - The fate of several types of Hawaiian honeycreepers hangs in the balance, with the possibility of at least two species going extinct in the very near future. 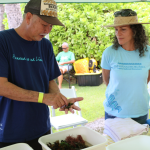