The Last Known Land Snail Of His Kind Dies 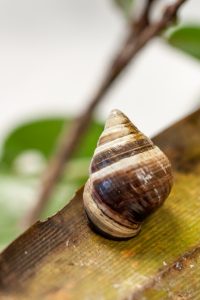 (Honolulu) –The last known Achatinella apexfulva in the Hawaiian Islands, “George,” died on New Year’s Day, 2019. George was approximately 14 years old and his name was derived from the Pinta Island Galapagos tortoise, “Lonesome George,” also the last of its species.

The Achatinella apexfulva was the first of over 750 species of land snails from the Hawaiian Islands described in western science. The first mention dates back to at least 1787 when Captain George Dixon was docked on O‘ahu and was given a shell on a lei.  These snails were once common on O‘ahu in the Ko‘olau Mountains and were used heavily for lei making as access to them was much easier at lower elevations.

A two-millimeter snippet of George’s foot was collected in 2017 for research purposes and the living tissue remains alive in a deep freeze container at San Diego’s Frozen Zoo.

George’s passing is a significant loss to locals as he was featured in numerous articles and hundreds of school children have viewed him over the years.

The remaining land snails in Hawaii face imminent extinction threats from invasive species and climate change. The Snail Extinction Prevention Program (SEP) is featured prominently in the upcoming television documentary, Forests for Life, which chronicles the vital importance of Hawai‘i’s native forests to all life in Hawai‘i. The hour-long special, considered the most comprehensive look at all the benefits native forests provide and the threats they face, debuts on KFVE-TV (K5), at 7:00 p.m. on Friday, Jan. 18th with a repeat on Monday, Jan. 21, 2019 at 8:00 p.m.