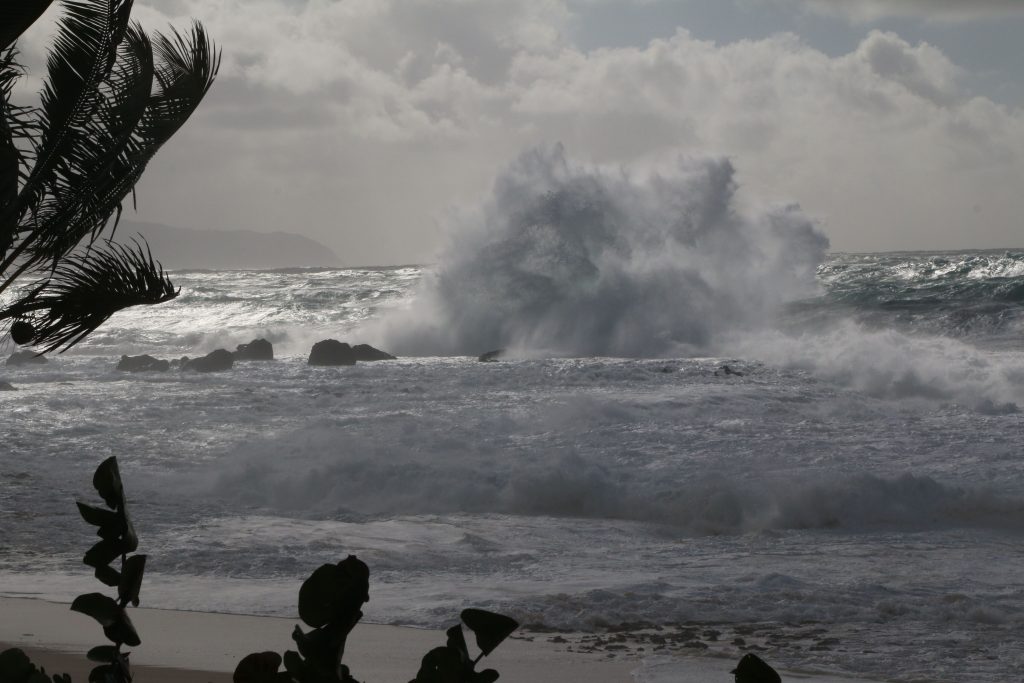 (Honolulu) – Personnel from numerous DLNR Divisions continue monitoring the impacts of the major winter storm bearing down on Hawaii.

DLNR Chair Suzanne Case and Sam Lemmo administrator of the DLNR Office of Conservation and Coastal Lands spent the day on Oahu’s north shore where there is particular concern about coastal erosion and wave inundation. They watched as the height of coastal waves steadily increased across the day. Case said, “The conditions are impressive but extremely dangerous. We don’t know yet the extent of sand loss on north-facing beaches.”

Lemmo added, “The forecasters were spot on with their predictions. They’re calling this an unprecedented event and we concur that we rarely if ever have seen the combination of record high on-shore waves, coupled with gale force winds.” Lemmo’s office is particularly concerned about the possible impacts of wave inundation and shoreline retreat undercutting the foundations of some north shore homes, already under siege from previous coastal events.

The storm has forced the closure of numerous state parks across the state. Many campers cleared out yesterday and officers from the DLNR Division of Conservation and Resources (DOCARE) manned road blocks on closed roads. Kaena Point State Park Reserve closed yesterday and DOCARE officers are stationed at Dillingham Air Field to stop people from entering. This morning they also asked a half-dozen surfers at Malaekahana State Recreation Area to exit the water.

At Kokee-Waimea Canyon State Park on Kauai several trees had fallen. None were blocking roads and no one was hurt. State Parks reports additional closures of park units is possible as the storm tracks east and south.

At the Lahaina Small Boat Harbor, a 27-foot sail boat broke free from its mooring and ended up on rocks on Front Street. Portable toilets blew over at the Waianae Small Boat Harbor on Leeward O‘ahu but no other damage has been reported at state small boat harbors.

Case concluded, “All of the emergency management agencies and the National Weather Service did a great job coordinating information and forewarning people.  From our observations today, folks are paying attention.”

(New) The DLNR Division of State Parks reports that for perhaps the first time ever, snow has fallen in a Hawai‘i State Park. Polipoli State Park on Maui is blanketed with snow.  It could also be the lowest elevation snow ever recorded in the state. Polipoli is at 6200 feet elevation.

Field crews will be assessing damage to state parks, forests, and trails tomorrow prior to reopening them.