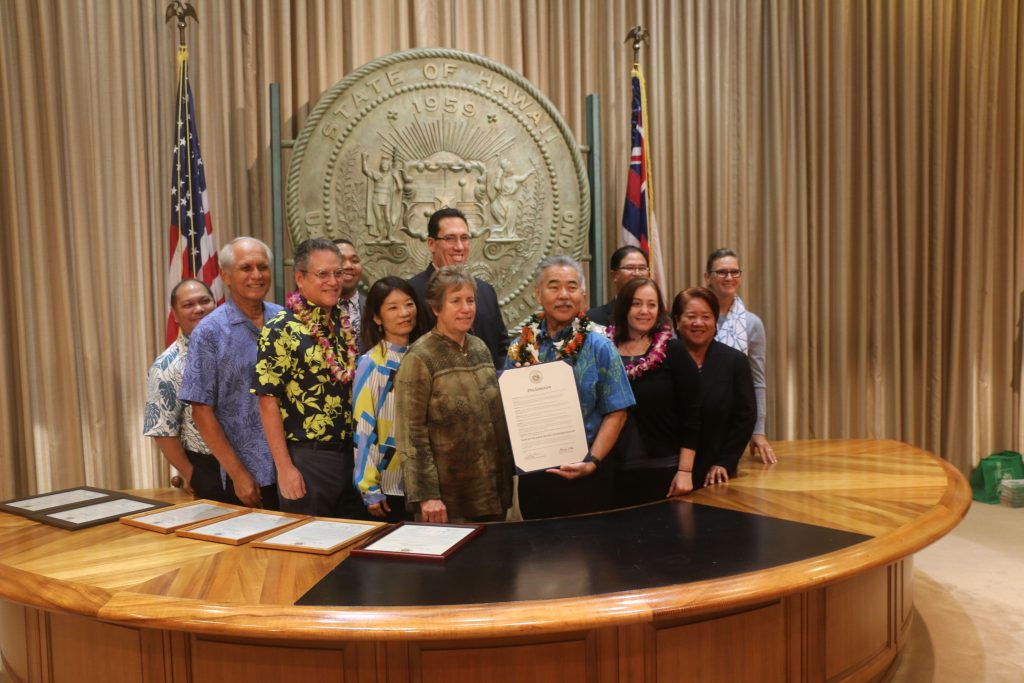 (Honolulu) – During a ceremony today at the Hawai‘i State Capitol, Governor David Ige proclaimed February as Hawai‘i Invasive Species Month. This long-standing recognition is intended to bring additional attention to the issue of invasive species.  Simultaneously five individuals and four organizations were recognized by the Governor and legislative leaders as Hawai‘i Invasive Species Committee Most Valuable Players for 2019.

The Hawai‘i island MVP award was presented to Patrick Merritt of the East Hawai‘i Cacao Association.  As president of the association, Merritt, has focused on promoting cacao and its farmers.  When an association member reported a sick tree, Merritt went out to investigate.  He captured an insect that was identified by state Dept. of Agriculture (HDOA) experts as an Australian longhorn beetle which attacks cacao and other important Hawaiian plants. After learning the beetle’s identification Merritt conducted his own research and then shared information with farmers and other agencies.  While there’s not a treatment yet for eliminating this pest, cacao farmers are now vigilant and are trying to trap beetles before they lay eggs.

The Maui County MVP award went to Megan Powers a respected member of an organic farming community in an off-the-grid area on Maui’s north shore.  The Maui Invasive Species Committee first encountered Megan four years ago when Little Fire Ants (LFA) were reported on her property.  Megan has become an earnest advocate for the need to control the invading ants as well as an advocate for the overall work of the invasive species committee. She’s testified at public meetings and has helped organized community-led working groups which include invasive species committee participation.

Kaua‘i Counties MVP award goes to Tim Flynn of the National Tropical Botanical Garden.  Flynn has made enormous contributions to the understanding and management of invasive plants on Kaua‘i. He is considered an irreplaceable source of information on the conservation of biodiversity. Flynn has been a member of the Kaua‘i Invasive Species Committee since its founding and has helped steer committee efforts toward evidence-based decision making. He emphasizes a big picture view to help fill gaps in Kaua‘i’s invasive species management practices. Recognized as an expert botanist on Kaua‘i and other Pacific island plants, Flynn has gathered thousands of alien plant species over the course of four decades of field work.  Managers often review his detailed records and personal memory to gain understanding of starting points when dealing with new invasive species threats. Without his records of alien plant collections, early detection and eradication programs on Kaua‘i would be starting from scratch.

Oahu MVP is Pauline Sato, the executive director of the Mālama Learning Center. Working closely with HDOA through a grant from the U.S. Department of Agriculture, Sato has been instrumental in heightening awareness about the Coconut Rhinoceros Beetle (CRB) across West O‘ahu. She continues to encourage residents to take actions to reduce the habitat for the invasive beetles.  Her organization’s outreach to the community and schools has made the impacts of CRB, how to report damage, and how to prevent spread an important part of the overall program to stop CRB in its tracks.

Business Leader award is also involved in collaborative efforts to eradicate CRB.  Kamehameha Schools has used a multi-pronged approach to address infestations of CRB on lands it leases.  This work has included fostering relationships between lease holders and the CRB Eradication Project; working with the project to identify new methods and control means for infestations on school properties; and engagement in the development and funding of a comprehensive green waste management plan for mitigation of CRB.

Greatest Hit award went to Daniel Kapalikūokalani-Maile for his help in detecting Myoporum thrips on O‘ahu.  After Kapalikūokalani-Maile spotted suspected Myoporum thrips in the Kalihi-Kapalma area he reported it online, which then launched an effective rapid response. His reporting is credited with stopping a widespread outbreak of these damaging pests to critical native Hawaiian dryland ecosystems. Currently isolated, infested plants are being removed and preventative measures to stop further infestation have been taken.  Prior to his report this pest had never been detected on O‘ahu and his reporting is credited with stopping an island-wide infestation.