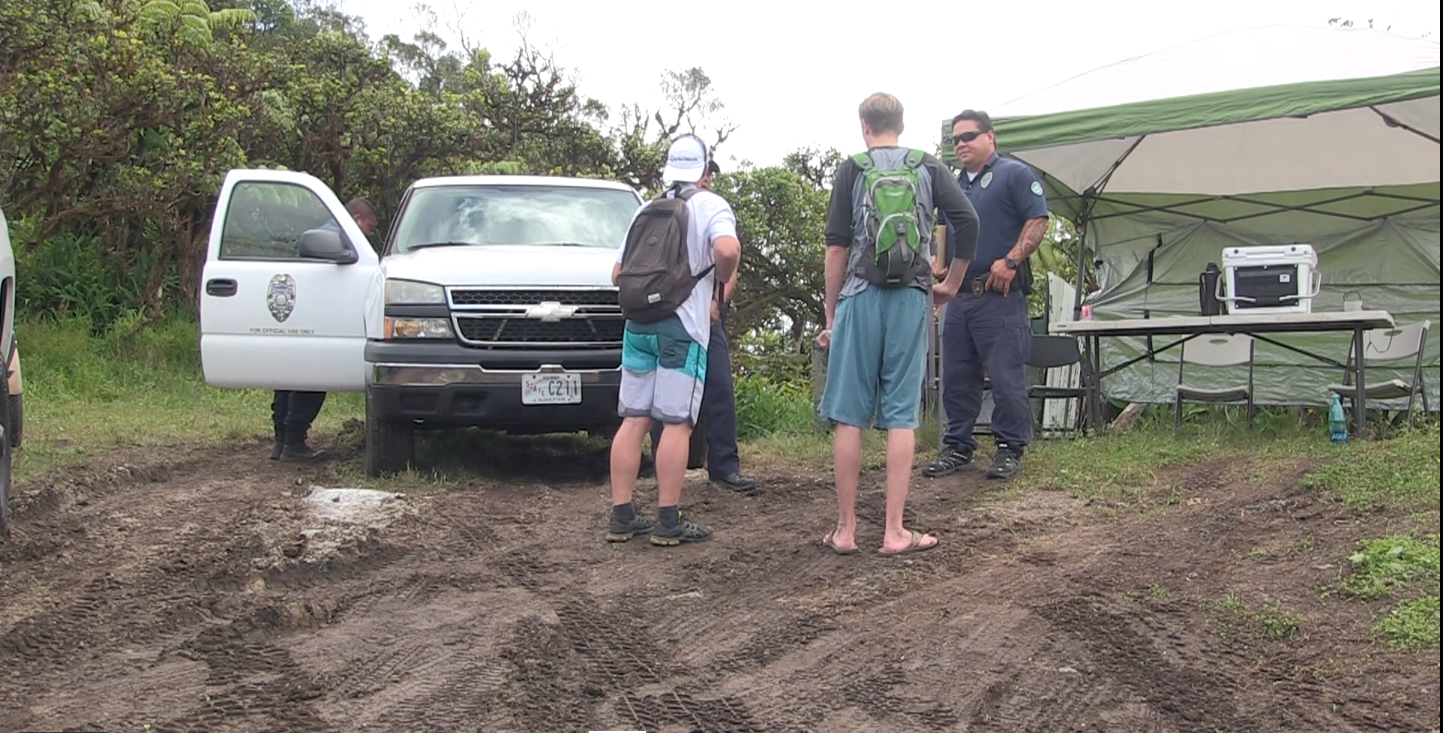 (Honolulu) – “15-seconds of terror,” is how a trespassing Honolulu hiker describes his near miss with a rock-fall incident at the closed Sacred Falls State Park on King Kamehameha Day.

Lincoln Hittner was one of six people cited by DLNR Division of Conservation and Resources Enforcement (DOCARE) officers for trespassing into a closed area after a 2 p.m. rockslide that left Hittner injured. Officers were already in the park to enforce the long-standing closure rules, in effect since a deadly 1999 Mother’s Day incident left eight people dead and dozens of others hurt. Five of the six people cited have Hawai‘i addresses.

164 miles away, on Hawai‘i Island, in the Kohala Forest Reserve, other DOCARE officers contacted hikers trying to  access what is known as the White Road trail.  It too is closed for safety reasons but unfortunately has been advertised widely on social media and the Internet as a “great hike to do at your own risk.”  Unlike two years ago when officers cited more than 100 hikers here for trespass into a closed area, the few hikers contacted yesterday were informed about the closure and given warnings.

“The issue of people ignoring warning and closure signs and putting themselves and first-responders into danger just won’t go away,” said DOCARE Enforcement Chief Jason Redulla. “We put a great deal of time and energy into patrolling closed parks and trails, when we could be devoting our resources to the myriad of other issues that our officers are responsible for across the state,” he added.

DLNR Division of State Parks Administrator Curt Cottrell again emphasized the disrespect shown by people who think the signs or warnings do not apply to them. Cottrell said, “When people enter closed areas such as Sacred Falls they expose themselves to flash floods, rockfalls, or slip and fall injuries along cliffs and unmanaged rough terrain –  incidents that are potentially fatal. This reckless behavior is a personal choice vs. accidental injuries in managed recreational areas, and egregiously risks our first responders and enforcement officer’s safety and exposes them to unnecessary potential injury. We witnessed this scenario play out yesterday. It is incredibly disrespectful for these individuals to disregard the rules and somehow think that they are immune to the hazardous elements of nature in areas such as Sacred Falls – where the dangers are real and have dealt devastating blows to individuals and their families.  Rules and closures are in place in these areas for good reason… this being among the top one.”

DLNR has publicized the dangers extensively over the past few years, including the production of a video on Sacred Falls that hikers tempted to trespass can watch on their phones via a QRC link on closed signs at the park’s entrance. As of last month, the video had been viewed remotely, on-site, 657 times.  The video highlights not only the personal dangers trespassers face, but the perils they put rescuers in. Additionally, the department has been very aggressive in contacting bloggers and travel websites that have included information about closed parks and trails. Fortunately, most sites and bloggers have voluntarily taken down information about closed areas.

DLNR Chair Suzanne Case concluded, “We don’t want anyone, including first-responders from our agency and many others, to experience 15-seconds of terror, as the people at Sacred Falls felt yesterday. There are hundreds of miles of legal and safe trails for people to enjoy across the state, so there is no reason for people to ignore the signs and warnings.”