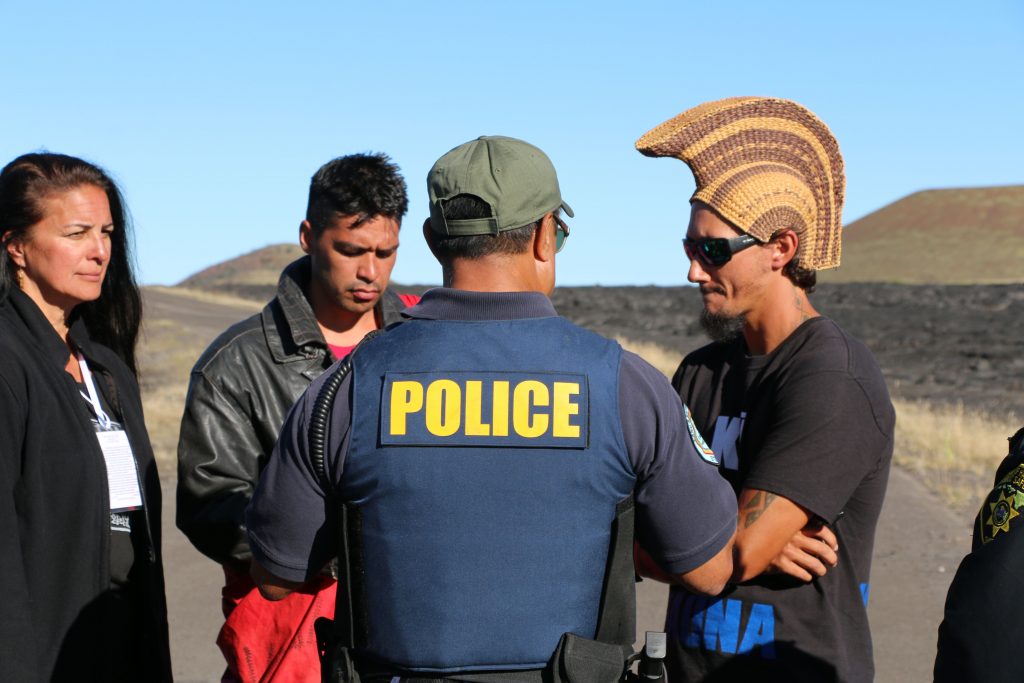 (Maunakea Access Road) – Lino Kamakau is a 33-year veteran of the DLNR Division of Conservation and Resources Enforcement (DOCARE). He’s camera-shy, likely because he’s a product of Hawai‘i Island, a Native Hawaiian, and during the current stand-off between protesters objecting to the TMT project, the ideal man to dialog with protest leaders. This is not a role he ever expected, nor one he particularly signed up for.  “You see what you get,” said Kamakau who is the DOCARE Hawai‘i Island Branch Chief. “I don’t speak with a forked tongue. There are times I can’t tell the protesters everything I know, but I try to be completely honest with them.”

For Kamakau and many of the 22 officers under his command the situation on Maunakea is emotionally difficult. As the world saw on Wednesday, when 34 kupuna were arrested and then cited for obstructing a government operation, the conflicting emotions were in obvious play. “We all live here,” Kamakau continued, “and long after all the other officers from other places have departed, we’ll still be here.  Many of these people are our blood relatives and in nearly all cases members of our island ohana. This is why it is so important that we continue to show respect and kindness on both sides.”

Kamakau says despite the conflicting emotions he and others are experiencing, bottom-line is they are sworn to uphold the laws and constitution of the State of Hawai‘i and as long as TMT has the legal right to move equipment up to its worksite near the summit of Maunakea that’s exactly what they’ll do.

He rejects the notion that law enforcement has used any excessive force.  To the contrary, at least one protester arrested on Wednesday called the operation, “beautiful.” Observers saw DOCARE officers hugging and kissing close friends or relatives before they were arrested. A lot of tears were shed and in impassioned remarks prior to the first arrest, Kamakau calmly explained what was about to happen and asked again for the protesters to remove themselves from Maunakea Access Road. They didn’t and they’ve vowed to stay. Kamakau said no matter what happens, law enforcement hopes for a peaceful resolution, but the goal remains the safe, secure, and lawful movement of construction equipment.

He is concerned that the large number of law enforcement resources being dedicated to keeping the peace here, means other conservation and resource laws are not being enforced around Hawai‘i Island. “While I appreciate and understand the passion the protesters are demonstrating, I’d respectfully ask them to remember that protection of our ocean and other public lands are falling by the wayside, not to mention the tremendous cost of the continuing law enforcement presence at Maunakea which is being born by every citizen of Hawai‘i.” He’s grateful for the professionalism shown by his Big Island officers, as well as those who are helping from O‘ahu.