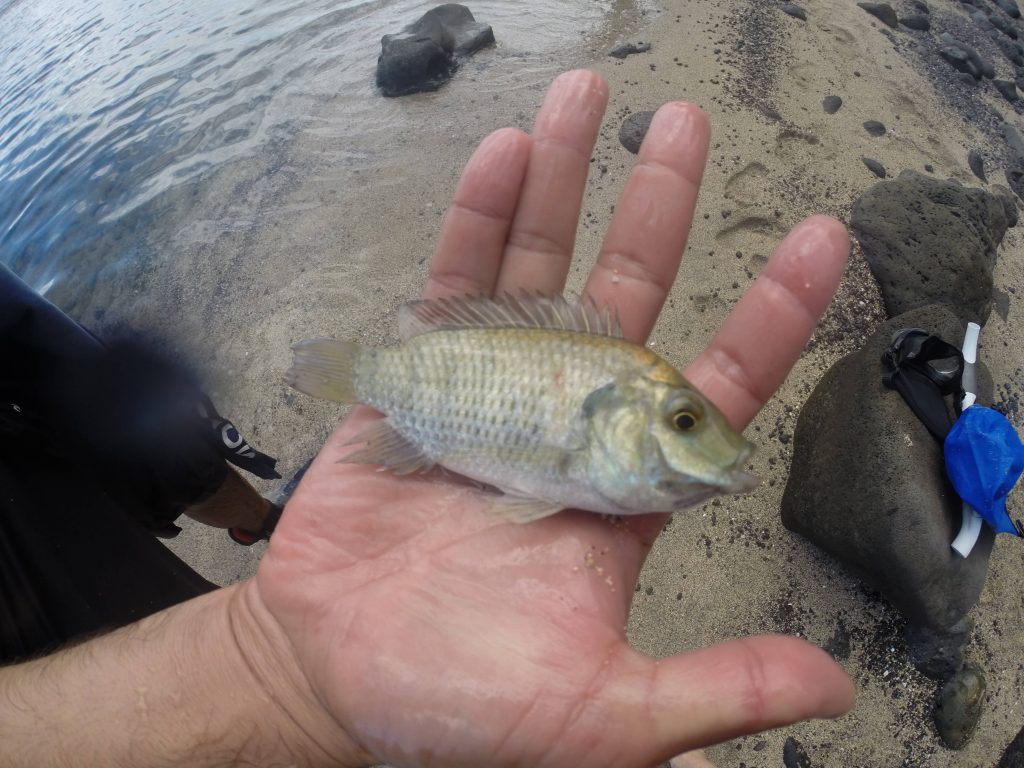 (Nāpali Coast State Wilderness Park) – Thousands of black-chin tilapia have invaded near-shore waters in the Nāpali Coast State Wilderness Park on Kaua‘i. Fishermen first reported seeing large schools of mostly juvenile tilapia over the past two weeks.  Yesterday a team from the DLNR Divisions of Aquatic Resources (DAR) and Boating and Ocean Recreation (DOBOR) conducted in-water surveys at the Nu‘alolo Kai section of the park and confirmed the reports.

Ka‘ili Shayler, a Fish & Habitat Monitoring Coordinator with DAR said, “We first spotted several dead tilapia up on the rocky coastline at Nu‘alolo Kai.  After we conducted water sampling, we snorkeled several spots close to the shoreline and soon discovered literally thousands of fish in schools. While these might originally be viewed as an introduced species to Hawai‘i they are definitely in this case an invasive species.”

DAR received reports of additional tilapia invasions along the Nāpali Coast. Shayler theorizes that they washed into the ocean from one of the ditch systems on the west side of Kaua‘i.  Since they are considered mostly a freshwater species, he thinks they are moving to areas where freshwater flows into the ocean. The Nāpali Coast has many streams and waterfalls.

Brian Neilson, DAR Administrator, remarked, “This is an unfortunate and dramatic example of how invasive species, once introduced to Hawai‘i, can quickly take hold and ultimately out- compete native species for resources like food. While certain types of tilapia are fished or raised for human consumption there’s no place in our aquatic ecosystem for these invasive fish, particularly in the high numbers we’re now seeing on Kaua‘i’s north shore.”

DLNR plans to take aggressive steps to try and stop the invasive fish from moving further either direction. Shayler and his colleagues are working on issuing a special activity permit to gather community members to try and remove the tilapia with a surround net.  He said, “I consider this an emergency situation. We don’t want this species proliferating down the coast. We need to remove them before winter swells make it difficult or impossible to do anything.”

Shayler used a throw net yesterday to catch five dozen tilapia, which were analyzed by aquatic biologists to see what they’re eating. Initial analysis showed that they’re currently consuming algae.  The DAR team also took water samples to help determine the salinity of the ocean where the tilapia are schooling. This will help provide scientific data about their tolerance for saltwater versus freshwater.

DLNR Chair Suzanne Case echoed Neilson’s comments, “The Nāpali Coast State Wilderness Park is among the most pristine, in-tact, natural areas in all of Hawai‘i. It’s absolutely critical that we aggressively address any new invasive species threats and with this invasion of black-chin tilapia, that is precisely what we’re planning.”