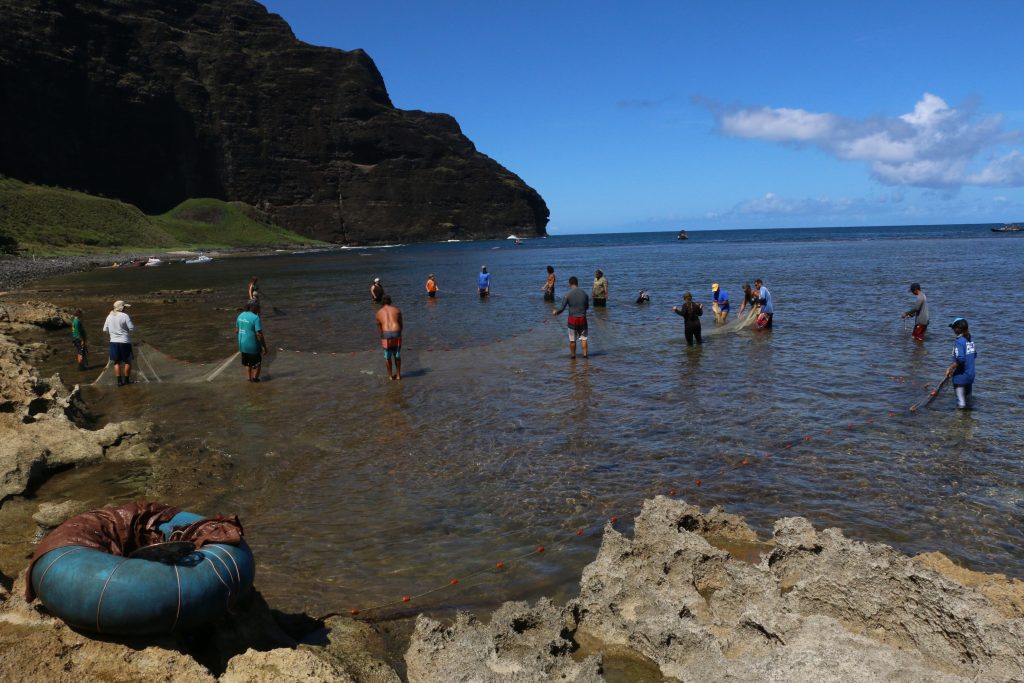 (Nāpali Coast State Wilderness Park) – This holiday weekend, fishermen from Kaua‘i’s west side and from the north shore joined forces with a team from the DLNR Division of Aquatic Resources (DAR) to try and remove invasive Black Chin Tilapia from Nu‘alolo Bay here.

Over the past few weeks, anglers have reported the presence of thousands of tilapia in the shallow waters of the bay and this was confirmed by the DAR team, who initially collected some fish for biological sampling. It is believed the Black Chin Tilapia was introduced into Hawai‘i as a bait fish back in 1962, though an alternate theory has them being introduced around the same time to control aquatic weeds. On O‘ahu it is the most common tilapia species and is also documented on Hawai‘i Island.

Using a combination of surround nets and throw nets under a State Special Activities Permit, more than a dozen fishermen and the DAR team, worked all day Saturday and into the night to try and remove as many of the wily fish as possible. Several volunteers commented, “they’re smart buggers.” As soon as they were trapped by a net many of the tilapia found openings and escaped. Ka‘ili Shayler of DAR led the weekend efforts, which included another full day of netting on Sunday, and said, “We removed about 300 tilapia.  We tried different tactics and what seemed to work best was using throw nets at night during low-tide.”  Previously, fishermen had removed an estimated 1000 fish on their own.

Tilapia reproduce fast and DAR biologists say this means they out-compete other species (including native fish), and then often suffer massive die-offs. They’re considered pests in estuaries, canals and reservoirs, and though tilapia is largely considered a fresh-water fish, the Black Chin is known to be more tolerant to salt water and can spawn in salinities of up to 35 parts per million.  It’s thought the tilapia that have invaded Nu‘alolo and other areas along the Nāpali Coast were washed down irrigation canals on the island’s west side and into the ocean during rain storms.

Shayler and his colleagues are really appreciative of the help from the local community.  He said, “It’s awesome for these folks to give up their Labor Day weekend with their friends and family to come to this pretty remote location to help and try to remove these fish. Fishermen from Kaua‘i’s west side and from the north shore don’t often get to interact, so that was a real bonus of the weekend’s operation.”

The special activities permit allows the use of small-mesh nets for removing tilapia all around Kaua‘i. DAR staff are encouraging anglers to continue catching them and are also researching funding to do DNA tracking of the fish to better pinpoint where they came from. It’s hoped when winter arrives and north shore swells push them out to sea, predators can more easily get to them.

While they are considered highly invasive and have a bad stigma, tilapia is considered both a good fish to eat and good as a bait fish. Shayler concluded, “This invasion gives us a chance to perhaps change what people think about them as a food source. People aren’t used to eating them, but you often see frozen, farm-raised tilapia being sold in stores, so clearly, they are considered a good fish to eat. We want people to feel free to catch and use as many as they can. Those efforts can’t hurt in helping to rid them from places like the Nāpali Coast.”