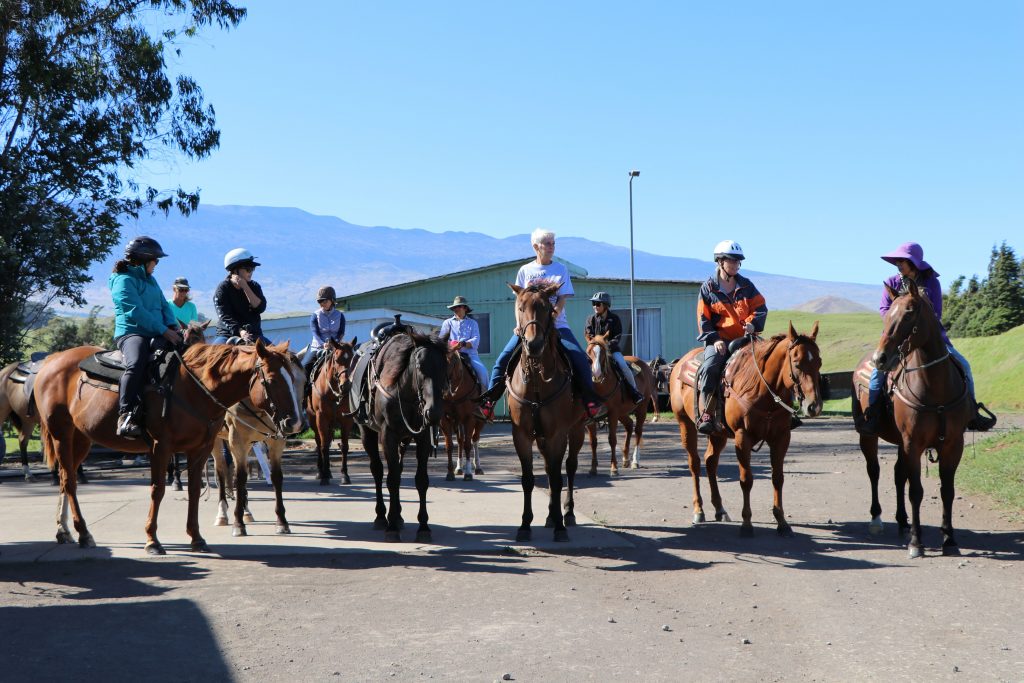 (Gilbert Kahele Recreation Area) – 45 women, mostly from Hawai‘i, spent the last few days being schooled in outdoor skills during the first-ever “Becoming an Outdoors Woman (BOW)” retreat in Hawai’i. This is the Aloha State’s initial foray into a 20-year-old international program that sponsors skill-development weekends in 41 states, seven Canadian provinces and seven other countries.

They succeeded, according to participant Kathy Camp of O’ahu. Saturday, on the second day of BOW, standing far below Mauna Kea, preparing to go on a trail ride, Camp remarked, “This has far exceeded my expectations. The company is great and one of the appeals for me was to meet new friends – like-minded women but all with a variety of reasons for signing up.” She looked forward to practicing newly acquired rifle and handgun skills after going through a firearm safety and handling class on Friday. She hopes to improve her shooting skills to show her husband she can actually hit clay targets while skeet shooting. “He’s not a great teacher,” Camp joked, “so with my new-found skills maybe I can beat him?”

Choy says the BOW concept was born out of studies two decades ago that showed sharp declines in women’s interest in outdoor sports. While hunting and fishing related skills make up 2/3rds of the curriculum, the other third is dedicated to non-harvest or non-consumptive outdoor pursuits like camping, kayaking, hiking and backpacking. “The Becoming an Outdoors Woman program,” he said, “is one of the reasons adult women are the only demographic group showing growth in fishing and shooting sports.”

Becoming an Outdoors Woman is a non-profit headquartered at the University of Wisconsin in Stevens Point. Two trainers from the BOW international office observed this first retreat and one of them, Kelly Van Laanen, commented, “That despite having to deal with far-flung venues on the Big Island, they did a great job and will learn from any minor hiccups.”

Home base for the weekend was the Gilbert Kahele Recreation Area but other venues included the Dahana Ranch near Waimea (horseback riding), Camp Honokaia at Honoka’a (beginning rifle & handgun), Kealakekua Bay (kayaking) and Hilo for fishing.

In addition to the Hawai‘i women who attended, a woman from Texas and two sisters from New Mexico joined the fun. Catherine Matthews and her sister from Las Cruces, NM joined their younger sister from Honolulu to celebrate her 50th birthday. When they were younger they enjoyed family camping and hiking trips, but then as Matthews described, “life gets in the way.” This was not only a chance to celebrate a birthday, but to embrace the kind of independence that outdoor skills provide.  Catherine says a course on canning and making jerky is one that she’ll be able to use immediately, along with a first-aid course. She echoed the other Catherine’s reaction, saying, “This is a great group of women and it’s been so much fun getting to know them.”

The Hawai‘i Becoming an Outdoors Woman team will analyze what worked well and what didn’t in preparation for the program’s expected return in 2020. DLNR will publicize application dates.