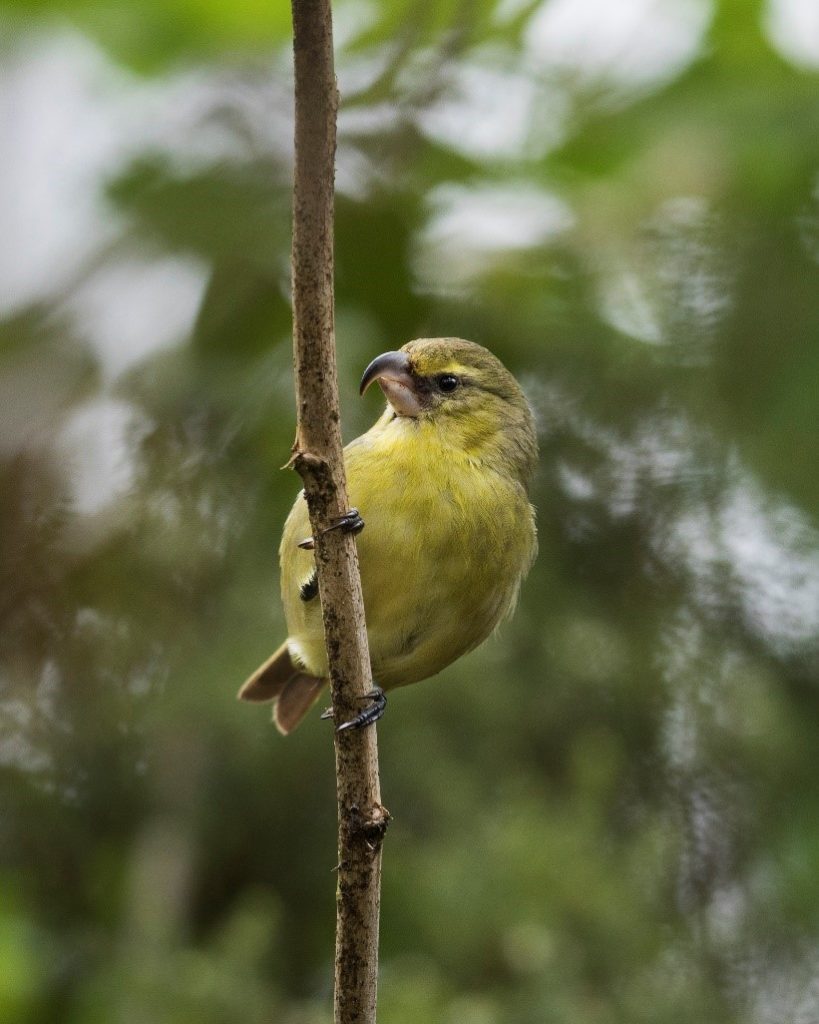 (Haleakalā, Maui)- In a bold action aimed at saving the endangered Kiwikiu (Maui Parrotbill, or Pseudonestor xanthophrys), in October four conservation partners will begin translocating both captive-bred and wild birds to a restored forest with the goal of creating a second, “insurance” population for this species. The Kiwikiu has declined by over 50 percent in recent years, and fewer than 312 birds remain in the wild. This unique and beautiful songbird, with its heavy, hooked bill, is only found in the high-altitude native forests on East Maui. As its one remaining wild population has declined, the species’ range has shrunk to less than 7,400 acres.

“Without intervention, we will lose this species, and we’ll lose it forever,” said Dr. Hanna Mounce, Project Coordinator at the Maui Forest Bird Recovery Project (MFBRP). “The Kiwikiu is hanging on in a very small and vulnerable population. We are committed to doing everything we can to save this species, and the partnership has used the best science we have to move forward with these recovery efforts.”

Hawaiian honeycreepers, of which the Kiwikiu is one, make up one of the world’s most endangered bird groups. Over the past few centuries, dozens of Hawaiian species have been lost forever. The committed partnership is dedicated to preventing continued population declines, and another tragic Hawaiian bird extinction.

The Hawai‘i Department of Land and Natural Resources, Division of Forestry and Wildlife; Maui Forest Bird Recovery Project; San Diego Zoo Global; and American Bird Conservancy have been working for over a decade to implement an action plan to save this species. These partners have been restoring native forests and preparing to translocate Kiwikiu from the State’s Hanawi Natural Area Reserve to the Nakula Natural Area Reserve, where the birds were previously found on the southwestern slope of Haleakalā Volcano.

“We are excited and proud of all that the partners have accomplished, including planting over 250,000 native plants and restoring the native forest within Nakula Natural Area Reserve in preparation for this October’s translocation of Kiwikiu to this site,” said Dr. Chris Farmer, Hawai‘i Program Director for American Bird Conservancy. “Kiwikiu died out from this site historically, and reintroducing them back here will greatly increase the species’ chances of survival for future generations.”

“Kiwikiu were once found on these slopes in the drier forests, even down to 500’ elevation in the past,” said Dr. Fern Duvall, the Hawai‘i Department of Lands and Natural Resources’ Maui Natural Area Reserve Manager. “It is hoped that these new releases will once again allow these birds to prosper in their ancestral home range.”

The project partners will release birds captured in Hanawi as well as those raised at the Maui Bird Conservation Center. Using individuals from these different sources will increase the likelihood of success, and boost the birds’ chances of doing well at the release site. “Conservation breeding is a critical step in saving Hawai‘i’s most endangered birds,” said Jennifer Pribble, Senior Research Coordinator for the Hawai‘i Endangered Bird Conservation Program, San Diego Zoo Global. “But it is a last resort and a stop-gap measure. The goal is always to return the birds back into the wild where they belong.”

The team will move the birds from the Maui Bird Conservation Center into temporary release aviaries at the Nakula release site in mid-October. There they will be intensively monitored to ensure that they are adjusting to the environmental conditions. Soon after, the field team will begin capturing wild birds in Hanawi and transporting them by helicopter to the Nakula release site.

Inside the temporary aviaries, the wild Kiwikiu will be paired up with the birds from the Maui Bird Conservation Center and observed daily. After the birds have adjusted to the release site, the pairs will slowly be released into the restored native forest, where supplementary food will be provided to help the birds survive and transition to the newly restored forest.

The team will outfit each bird with a small radio transmitter, and the movements of the entire cohort will be intensively tracked. These observations will be used to determine if the birds are surviving and if they start to breed — measures of the overall success of the project — and whether any changes will be necessary in future translocations.