ALA WAI CANAL DREDGING AND IMPROVEMENTS BEGINNING THIS MONTH 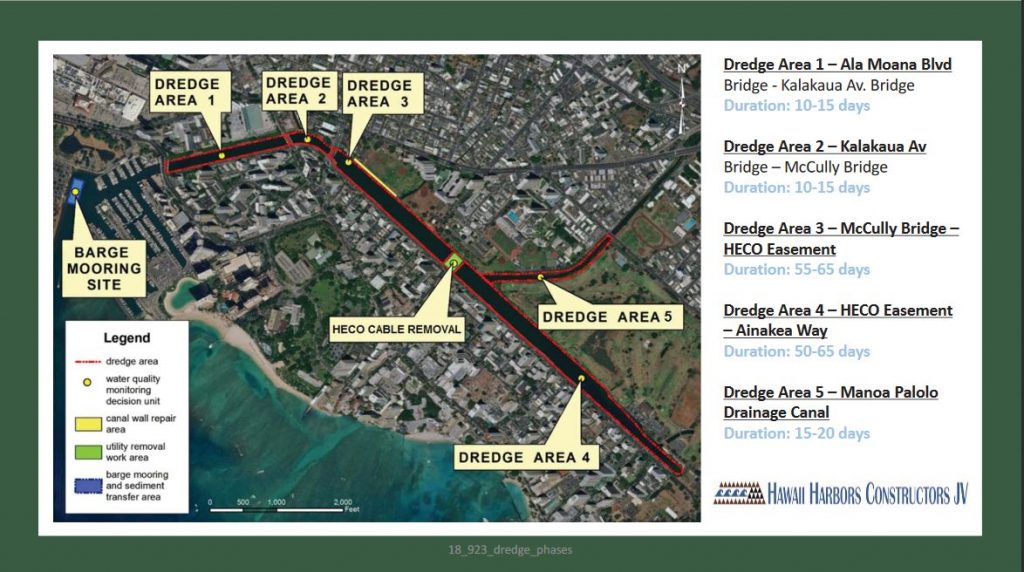 (Honolulu) – Dredging of the Ala Wai Canal to remove accumulated silt and sediments, remove abandoned Hawaiian Electric Company cables, and to repair two sections of canal wall begins this month. Extensive public outreach was conducted by the DLNR Engineering Division to inform canal users, like canoe clubs, of the work.

Dredging is expected to remove 186,000 cubic yards of material from depths ranging between six and twelve feet. The dredged material is suitable for ocean disposal at an Environmental Protection Agency (EPA) approved site – the South O‘ahu Ocean Dredged Material Disposal Site. The walls being repaired include the Mauka side fronting the Ala Wai Community Park and between the Kalakaua Avenue and McCully Street bridges.

DLNR last dredged the canal in 2002. As with that project, work hours for current dredging are Monday-Saturday from 7:00 a.m.-10:00 p.m. and from 9:00 a.m.-10:00 p.m. on Sundays and holidays.  As canal users were previously informed, there will be temporary construction impacts including constraints to water recreation, sporadic walkway closures, and minor noise. The project is expected to last for a year.

The long-term benefits of canal dredging include maintaining the ability of the canal to efficiently convey storm water flows to the ocean to reduce the risk of flooding and to improve aesthetics and use of the canal for recreational users.

The project contractor is Hawaii Harbors Constructors JV. The cost of dredging and wall repairs is $21,151,615.

Project information including plans and tentative schedule can be found on the DLNR Engineering Division website: http://dlnreng.hawaii.gov/projects/ala-wai-canal-dredging/