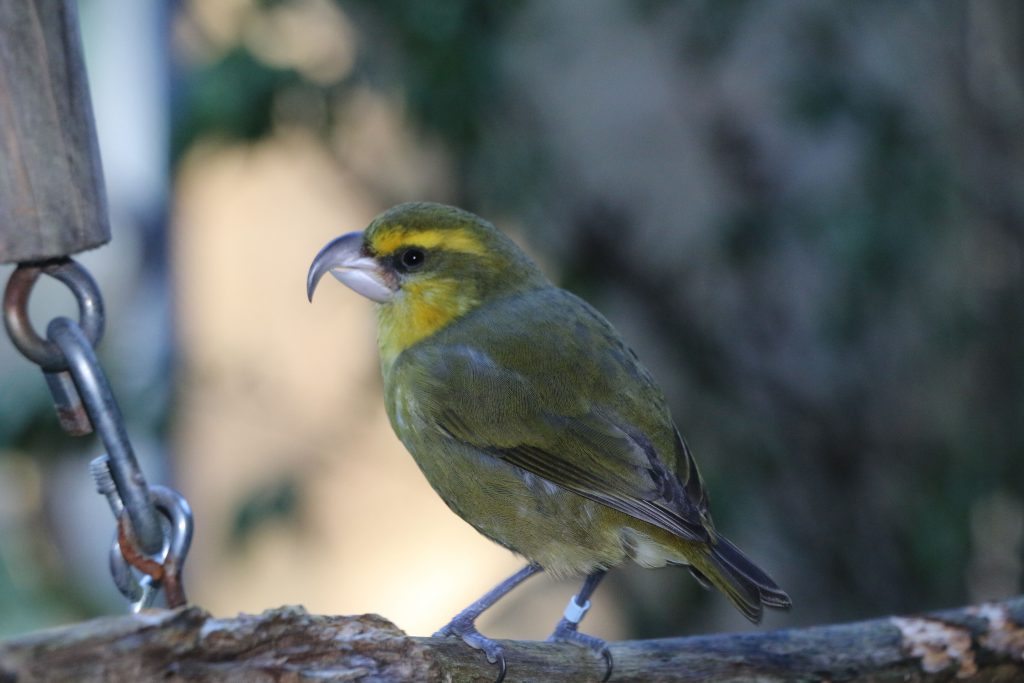 (Hanawi Natural Area Reserve, Maui) – Five male and two female kiwikiu (Maui Parrotbill; Pseudonestor xanthophrys) have now been moved from the Hanawi Natural Area Reserve (NAR) on the windward slopes of Haleakalā, to the Nakula NAR on the leeward slope of Maui’s highest mountain. The goal is to establish a second “insurance” population that will significantly lower the risks of extinction.

Next week, the first of the seven wild kiwikiu will join captive-bred birds from San Diego Zoo Global’s Maui Bird Conservation Center, in timed releases into the newly restored, koa-dominated forest at Nakula. Prior to their release, the birds will be outfitted with tiny radio transmitters to allow researchers to track their movements for one to two months.

This is an important step in the decades-long effort to re-establish a distinct population of kiwikiu to better ensure the tiny, yellow forest birds’ survival. Kiwikiu once inhabited all of the forests of Haleakalā, and were even found on Moloka‘i, but due to habitat destruction by feral ungulates, the species became limited to a tiny area on the windward side of Maui. Biologists estimate that fewer than 300 of these endemic honeycreepers remain; making them among the most critically endangered native birds in Hawai‘i. Surveys indicate the population is more likely around 157 individuals.

Without immediate intervention from people, it is feared the kiwikiu could become extinct. This fate has befallen numerous Hawaiian bird species in modern times, including Maui’s po‘ouli (Melamprosops phaeosoma) previously found in these same forests, which went extinct in 2004. Preventing another extinction requires intensive management actions.

Last week, a team of partners from the Maui Forest Bird Recovery Project, the Hawai‘i Department of Land and Natural Resources Division of Forestry and Wildlife, the U.S. Fish and Wildlife Service, San Diego Zoo Global, Pacific Bird Conservation, and American Bird Conservancy scoured the steep, muddy slopes of Hanawi NAR in repeated attempts to snare kiwikiu in mist nets. As many as ten of the fine mesh nets were deployed for eight straight days, resulting in the capture of 15 kiwikiu. Seven males and one female, which was likely incubating, were released back into Hanawi to achieve a better balance between males and females in the group moved to Nakula.

As the effort neared its end, Dr. Hanna Mounce, Project Coordinator for the Maui Forest Bird Recovery Project, announced, “We just caught a female kiwikiu. Surprisingly, we encountered a heck of a lot of males and other honeycreeper species, but we’re super thrilled we have two females in the bird room now.” The team is planning a mid-November return to Hanawi to attempt to capture more females.

The bird room is a mobile aviculture facility and veterinary lab, where each bird is placed into a separate box. They were fed three times a day, and a veterinarian from San Diego Zoo Global gave them thorough health checks. Peter Luscomb, founder and lead coordinator of Pacific Bird Conservation and a retired, long-time curator at the Honolulu Zoo, volunteered to run the bird room. Each day, he mixed up food for the birds and carefully tracked their health, monitoring weight changes and feces quality.

He recalls a quote by William Beebe as the impetus for his continued involvement in this project and others aimed at saving endangered birds. “When the last individual of a living thing breathes no more, another Heaven and Earth must pass, before another shall be.” That line encapsulates the motivation for individual team members to camp for ten days at a time, and work at 6,000 to 7,000 feet elevation, often in cold, wet, muddy, and very steep terrain.

Upon release at the Nakula NAR, the birds will hopefully begin breeding in what is largely a koa forest, brought back to life in recent years after decades of overgrazing by cows, goats, deer, and other hooved animals. To date, more than 250,000 shrubs and trees have been planted at Nakula, and it is believed that the restored ecosystem might be more productive habitat for kiwikiu, rather than the wetter, colder, ʻōhiʻa-dominated forest at Hanawi. Despite the protections kiwikiu enjoy at Hanawi, their numbers have continued to decline in recent years.

“This is why it’s really important we take every step and every measure possible to save these birds,” Mounce explained. “They are small, but if we can ensure their survival, the new Nakula population represents an enormous step toward eliminating, yet another extinction risk for one of Hawai‘i’s invaluable and irreplaceable forest birds. These bold measures to save them represent their last stand.”