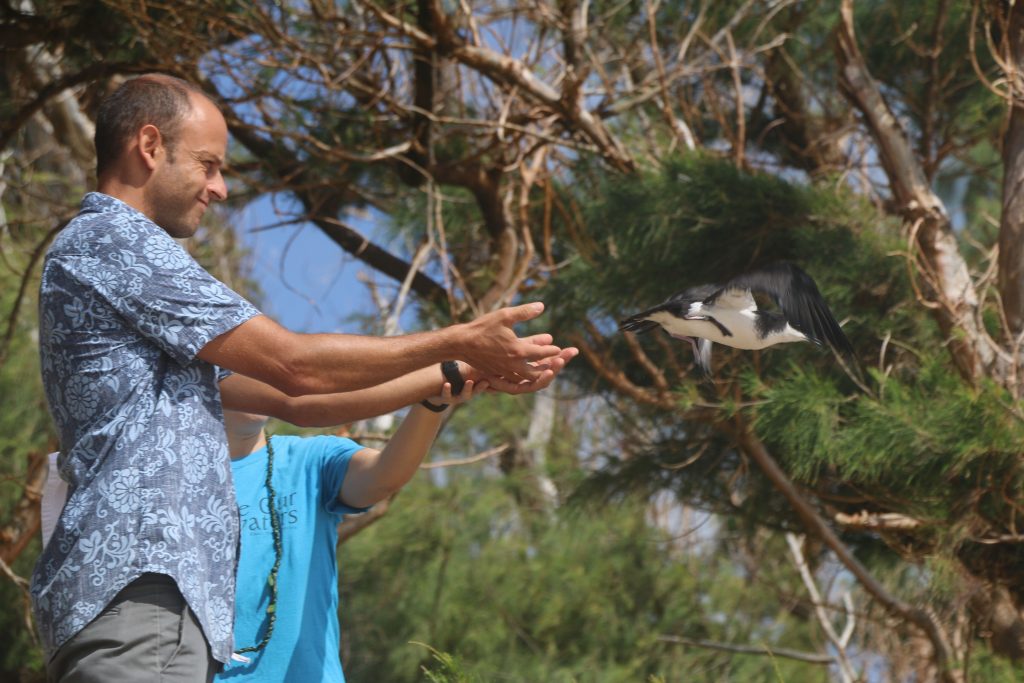 Every year, the SOS project rehabilitates both ‘A‘o and U’au (Hawaiian petrels) that are either injured by powerline collisions or attracted to artificial lights on the island of Kaua’i.  Both species have suffered severe declines  in recent decades – studies by KESRP have shown that between 1993 and 2013 the population of ‘A‘o declined by 94% and U’au by 78%.

During the month of October, light attraction becomes a particular concern for ‘A‘o. This is the peak month when young ‘A‘o are leaving their burrows for the first time and head out to sea.  After they fly from their burrows in the remote mountain areas in which they breed, they get attracted to the bright lights of towns. They often circle until they end up exhausted and grounded. If the birds are not rescued by good samaritans they can become easy prey for introduced predators  (such as feral cats, rats and pigs) or run over by cars.

Alexa Foster, a KESRP staff member who helped organize Tuesday’s event, explained its’ importance. “Kauai’s seabirds really need our help.  As the next generation of leaders on Kaua’i, our keiki will be responsible for the future of ‘A‘o and other native wildlife into the future.  When they see rehabilitated ‘A‘o chicks up close, they form personal connections that can last a lifetime.”

Loea Keana’aina of Kawaikini Charter School said, “I hope the ‘A‘o, U’au and ‘Ake’ake will fourish and not go extinct. I will try really hard to keep them safe.” Pōhai Tabia, also of Kawaikini Charter School added,”The ‘A‘o is so helpful and important to Hawaiian culture as they were a vital source of food, a helpful fishing companion, and amazing wayfinders. These ‘Island Engineers’ are so valuable, and I am so thankful that we were taught how to protect and be aware of them.”

Everyone can help at this time of year by keeping an eye out for fallen birds. If birds are found, they should be carefully collected and placed in one of the aid stations located at Kaua’i County fire stations and other locations around the island. They’ll be picked up by SOS staff.  The fall-out season continues until mid-December.

KESRP is a state DLNR Division of Forestry and Wildlife project, administered by the Pacific Co-operative Studies Unit of the University of Hawai‘i. SOS is a DLNR project housed at the Kaua’i Humane Society and financially supported by the Kaua’i Island Utility Cooperative.