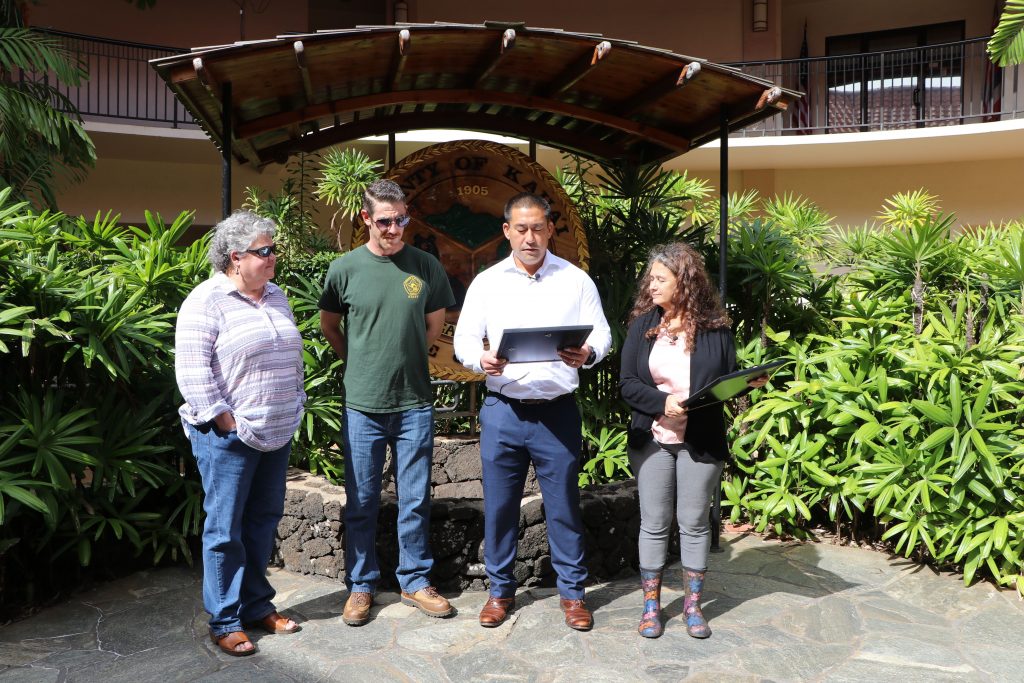 (Lihue) – Kaua’i Mayor Derek S. K. Kawakami, who has “two furry children at home,” like many other dog lovers was so moved by the recent rescue of a dog named Orange, he proclaimed today as, “Botanist to the Rescue Day.” All seven members of the county council signed a companion recognition certificate.

Both were presented this morning in a brief ceremony to botanist Adam Williams with the DLNR Division of Forestry and Wildlife. On Nov. 7th, Williams successfully extracted Orange from an 81-foot-deep hole where he’d been trapped for 5 1/2 days. Williams’ boss, DOFAW Kaua’i Branch Manager Sheri Mann called on Williams to help because he’s a certified arborist which requires expert climbing and rappelling skills. It took Williams less than half an hour to descend into the dark, dank hole, bundle the dog into a bag and then supervise his lift to safety. Other than losing some weight Orange was not hurt when he fell into the hole – believed to be part of an old water or irrigation system.

Mann was also recognized by county officials. She announced, that as of yesterday, a fence has been erected around the perimeter of the hole to prevent any further mishaps. The hole is in a state forest reserve and Mann and her team continue to explore options for potentially filling it in.

Mayor Kawakami described Williams’ efforts as truly heroic and joked the county might call on him for future high-angle rescues. He said people around the nation were touched when they learned about Orange’s rescue, as he was. Council member Felicia Cowden echoed the Mayor’s sentiments while presenting Williams with the council’s certificate of appreciation. Both commended DLNR for having such community-minded staff, vital on a small island like Kaua’i.