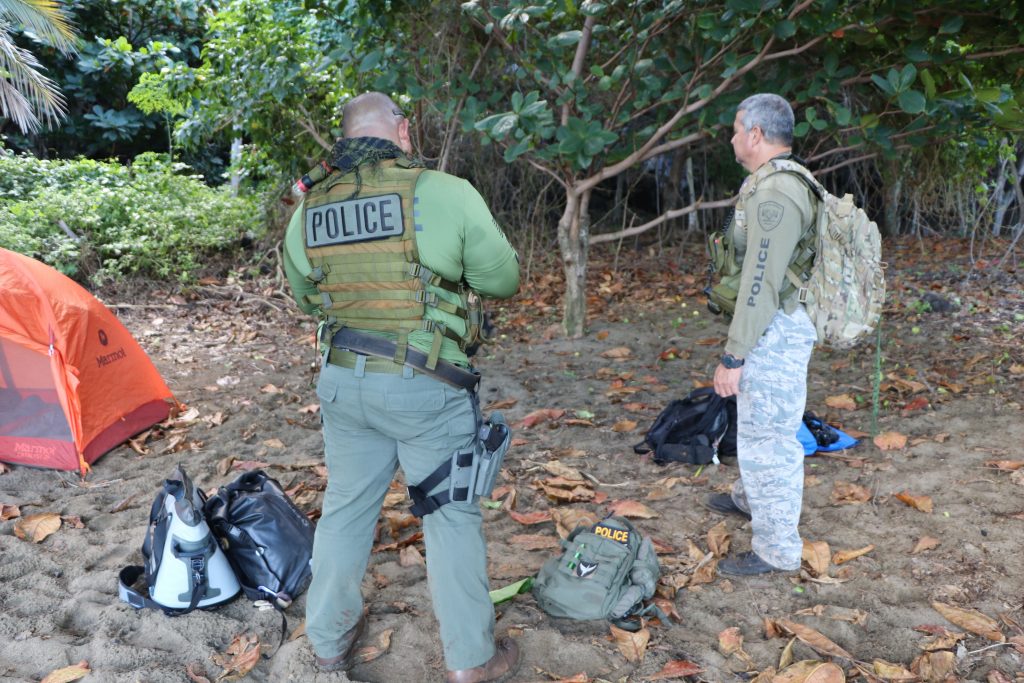 (Nāpali Coast State Wilderness Park) – One of the sure signs of the new management paradigm for this state park and the adjoining Hā‘ena State Park on Kaua‘i is a truer wilderness experience for people hardy enough to hike 11-miles one-way to Kalalau Beach.

For decades this section of the state’s largest wilderness park had a wild west atmosphere, with illegal campers and often-times their huge, trashy campsites marring the experience and the environment. This increased management costs due to the need to use helicopters to remove the rubbish. A large part of the waste stream was generated from illegal campers, who also were serviced by vessels, that would bring in cases of alcohol, furniture, and food supplies.  Backpackers with permits and a wilderness ethic would never consider carrying these heavy, bulky supplies along the rugged and challenging Kalalau trail, plus it wouldn’t be feasible.

Earlier this week a pair of officers from the DLNR Division of Conservation and Resources Enforcement (DOCARE) issued just three citations to people at Kalalau for closed area violations. This is in sharp contrast to visits prior to the park closing for 14 months after severe April 2018 flooding. During earlier law enforcement sweeps dozens of people were often criminally cited, and some were physically arrested.

DOCARE Enforcement Chief Jason Redulla observed, “It’s heartening to see that the limits on visitors at the parks entrance is having the desired and positive effect of less illegal activity at Kalalau Beach.”

On Tuesday, DOCARE Officers Jeff Garcia and Otis Ingram flew into the area and walked the entire length of the beach and adjacent designated camping area.  They encountered 25 or 30 campers, most of whom produced valid permits.  All three who were cited are required to make court appearances and could face fines or jail time.

Garcia said, “We got a lot of positive feedback from the legal campers that Kalalau was quiet, mostly trash-free and devoid of long-term squatters who used to claim prime camp spots and in some cases were conducting illegal activities from those spots.” Recently officers cited a man who was conducting illegal commercial operations – bringing people to the wilderness park by boat or jet ski.  The man was been cited repeatedly for the same violation.

The officers and Interpretive Technicians with the DLNR Division of State Parks have noted that some campers report others are leaving their trash or equipment behind. This is not only unsightly but forces the parks division to fly sling-loads of rubbish out by helicopter, which is very expensive.

State Parks Assistant Administrator Alan Carpenter reminds anyone camping or hiking here or anywhere in Hawai‘i to pack out what they carry in.  As an archaeologist, Carpenter is also responsible for the protection of the many Native Hawaiian cultural features along the Nāpali Coast.  “With way too many people in the backcountry prior to closing the park, we were seeing rock walls being dismantled, heiau being desecrated, ancient taro lo‘i being trampled, and great disrespect.  We hope with many fewer people in the parks at one time, the presence of our rangers (interpretive technicians) and continued surprise visits from DOCARE officers, we’ll see an end to this disrespectful and unlawful type of activity.”

At Kalalau, the foundation is in for a new wilderness cabin where rangers will be stationed, in order to have an increased presence at trail’s end. While the park rangers don’t have law enforcement powers, DOCARE officers and emergency responders are a satellite phone call away. The state legislature provided funding for three ranger positions after recognizing the need for “boots on the ground,” to help educate visitors about wilderness behavior, to provide trail, weather and safety information, and to have immediate contact with law enforcement or first responders when needed.

Carpenter concluded, “What’s happening at both Hā‘ena and Nāpali is exactly what we hoped for when we had the opportunity to provide many infrastructure enhancements to the parks, to limit the number of daily visitors, and to have staff there all the time. However, we’re finding that despite the better management and reduced numbers, some visitors lack a wilderness ethic.  This is a Leave-No-Trace area. If you pack it in, you need to pack it out.  Leaving equipment and food behind for others only enables illegal and unprepared campers. Overall, six months in, we’re very pleased with what we’re seeing.”