MINUS ONE FLIPPER – TURTLE 1036 RETURNS HOME

Caught up in Monofilament Fishing Line 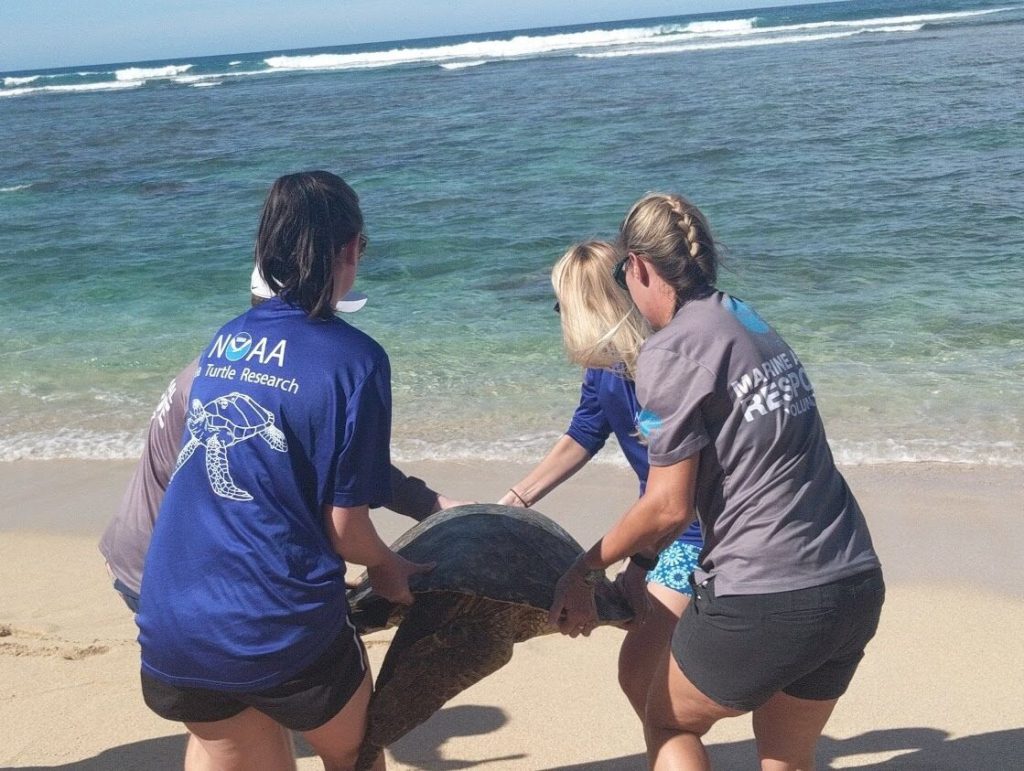 (Waialua, O‘ahu) – The moment a 250-pound Green Sea Turtle hit the shoreline, it was a beeline back to the ocean.  The turtle, marked as 1036, was released on a beach here yesterday, after having its right front flipper amputated almost three weeks ago.

The injury was reported to the NOAA (National Oceanic & Atmospheric Administration) statewide marine animal response hotline.  Volunteers & staff from Hawai‘i Marine Animal Response (HMAR) responded to the injured turtle and transported it to the NOAA Daniel K. Inouye Regional Center on Ford Island, where veterinarians decided the best course of action was to remove the damaged flipper.

Thursday afternoon, a large group of staff and volunteers from partner organizations (NOAA Fisheries, DLNR Division of Aquatic Resources, HMAR), watched as 1036 returned home.  The turtle was hurt after getting entangled in monofilament fishing line.

Dr. Summer Martin, the leader of the NOAA Marine Turtle Biology Assessment Program confirmed that fishing gear related injuries and deaths continue to increase.  “Our program has been monitoring the population since 1982 and monofilament line entanglement from coastal hook-and-line fisheries is currently the primary threat observed in sea turtle stranding’s in Hawai‘i,” Martin explained.

Positive outcomes, like that of 1036’s, are relatively rare.  Irene Kelly, NOAA’s Sea Turtle Recovery Coordinator for the Pacific Islands Region, watched as the large turtle was carted down a beach access path. Once on the beach, a towel was lifted off the animal, and four people lifted it up and out of its carrier. Within seconds it scooted to the water’s edge and then immediately swam away. An HMAR volunteer was on hand to provide a pule.

Kelly said, “Despite everything, turtles are pretty resilient. 1036 swam away quickly and strongly. He appeared to wobble briefly as he compensated for his missing front fin. Unfortunately, most turtles caught up in monofilament or braided nylon fishing line are either dead when we’re notified or have to be put down because their injuries are too severe.”

While many people think fish hooks cause the most turtle injuries and deaths, Kelly compares hooking’s to piercings. “With turtles, a hook can be left in and it will eventually rust out. Monofilament and braided nylon line on the other hand is a much greater threat. Fortunately, fisher education over the past decade appears to be making a difference.  On Maui for instance, over the past two years we’ve seen a reduction in the numbers of entangled turtles, but state-wide entanglement in gear from hook-and-line fisheries continues to increase and is our primary threat to turtles,” Kelly explained.

“It’s not the hook that kills turtles, it’s the fishing line that’s more dangerous. They can live usually with the hooks in them. In addition to entanglement if they ingest the fishing line, foods binds-up to it and cause blockage,” said Nicolas Lopez, HMAR’s Field Manager. Turtles can also get caught up in lost or abandoned fishing gear. Education and outreach efforts focus on teaching fishers how to safely remove fishing line from a live, entangled turtle, as well as providing information about how to reach stranding program personnel and volunteers for help. They’re also encouraged to use only barbless hooks.

Turtle 1036 now has a second chance for a good, long life.  The only downside is, because of the loss of his flipper, he’ll no longer be able to breed because males need both front flippers to hold on to a female when mating. Turtles tend to be creatures of habit, so there’s a pretty good chance Waialua residents and visitors will see 1036 swimming around. If people see him, they’re encouraged to report any sightings, so NOAA can keep track of his healing progress.