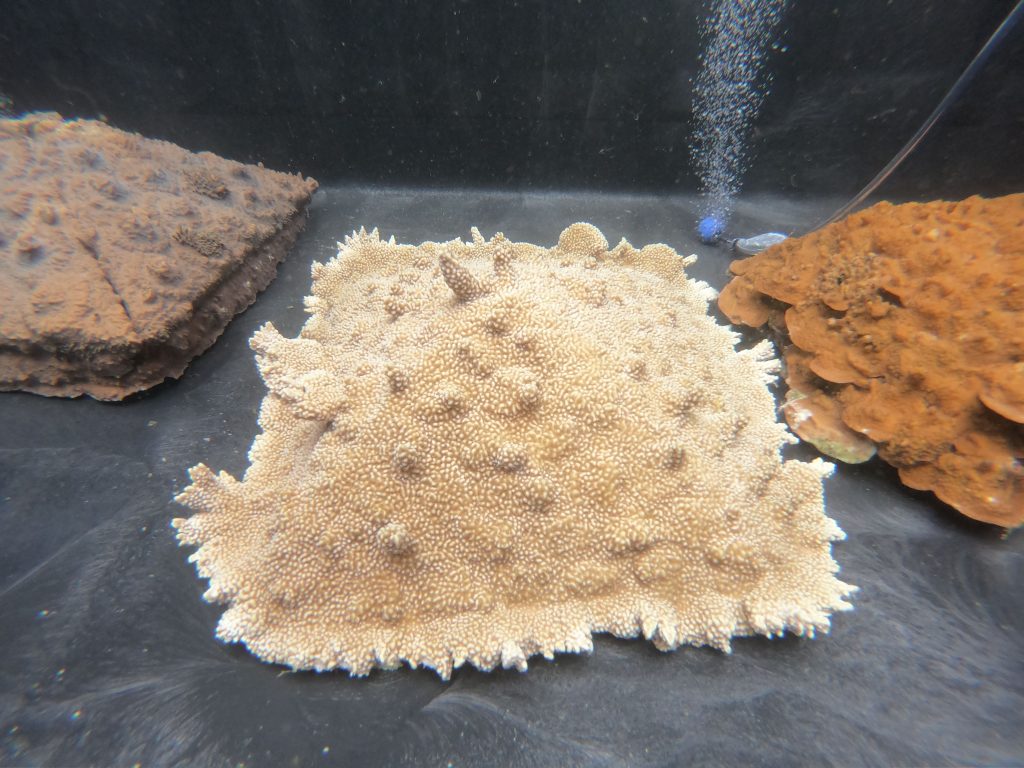 (Honolulu) – In the world of nursery raised corals, a one-meter coral is considered big. Yesterday, a team of biologists and technicians from the DLNR Division of Aquatic Resources (DAR) planted what is believed to be the largest coral to be grown in a land-based nursery.

David Gulko, a coral biologist in charge of the Anuenue Coral Restoration Nursery on Sand Island said, “This one-meter (39 inches) coral is the first one that’s ever been done. It’s critically important because as we put out really large size corals, they provide a tremendous number of ecological services and functions and those places where they go.  Much greater than if we put out a bunch of small coral.”

The large coral was split into four different pieces before loading onto a work boat. They were then placed into a tub that was gently lowered into the arms of waiting divers. In addition to the one-meter coral, the team out-planted an additional dozen, smaller coral modules in the same area.

The coral reef off of the “reef runway” at Daniel K. Inouye International Airport was dramatically altered a decade ago when a U.S. Navy vessel, the USS Port Royal, grounded there. Gulko  explains that it’s been very difficult to restore what represents one of the best, remaining, coral reefs on O‘ahu.

This week’s effort is the first out-planting of nursery-grown coral at this location. Over the next two years they hope to place another 200 plus modules in close proximity to one another at this site. While the team grows corals really fast in the nursery, in the waters around Hawai‘i when they go into the ocean, that growth rate slows tremendously.  Gulko explains, “In Hawai‘i our corals naturally grow out in the wild less than one inch each year. We grew the one-meter coral in one year. But as soon as we put them back into their natural environment, they experience the slowest coral growth rates on the planet.  Most places outside Hawai‘i experience coral growth between six and nine inches annually.”

Coral ecosystems are considered the foundations of the ocean. “Over time, as different species of fish and invertebrates settle into their coral homes, you’ll start to see the complexity of the  biodiversity come back in areas that have been restored,” said Gulko. “But from an ecological perspective, in terms of services and functions, as soon as we put them out, we’re gaining the shelter, the food sources, the protection from predators, etc., that these coral modules provide.”

“Healthy coral reefs also provide shoreline armoring and protection from storm surges. The better shape they are in, the better they can resist and recover from the frequent coral bleaching episodes we’ve experienced, caused by global warming,” said DAR Administrator Brian Neilson.