Despite Offers for Help – None Accept 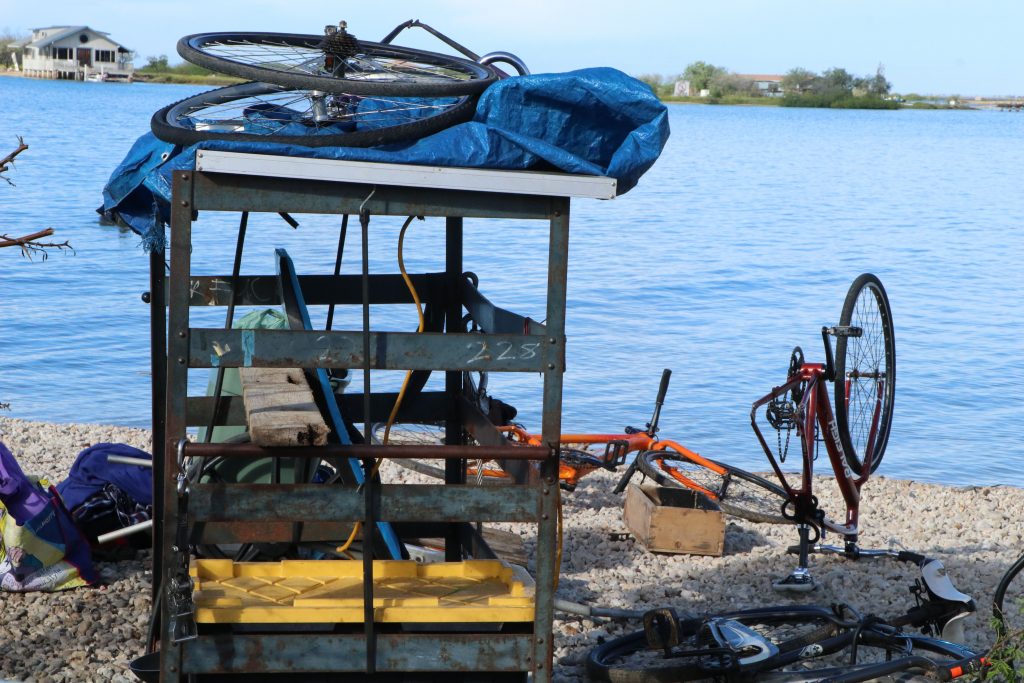 (HONOLULU)–Hidden behind a thick barrier of kiawe trees, on beaches facing the airport, dozens of homeless people set up their tents and hand-fashioned homes. They are doing this on state-owned land at the Sand Island State Recreation Area SRA). Scattered across the beach and near the trees are personal belongings, the frames, wheels and components of many bicycles, mopeds, cooking & eating utensils, bottles and cans…pretty much everything one would associate with living off the land.

Camping at SRA is allowed with a permit. This week a team from DLNR, from the Hawai‘i Dept. of Transportation’s (HDOT) clean-up contractor, and officers with the DLNR Division of Conservation and Resources Enforcement (DOCARE) cleared out people and camps from 42 camps that had been posted with warning notices a week earlier.

Pua Aiu, DLNR’s homeless coordinator said,“This is a public beach and we’ve been getting complaints that dogs are chasing people and squatters are yelling at people. Our goal is to get everyone out of here, so it becomes more manageable for the DLNR Division of State Parks. The problem is once we clear them, they move to adjoining property and then come right back in and re-establish their camps.”

The Hawai‘i State Legislature has appropriated funding for trash removal and property storage. This funding goes through HDOT which provides debris removal and storage for all state agencies. Cyril Brighter with contractor HTM said during this week’s Sand Island clean-up they hauled away 40 large containers of trash. He added,“We did take out a lot of stuff. Among the rubbish are clearly other people’s missing items, like bikes, mopeds, motorcycles, books, tools, welding equipment…you name it they had it.”

The state employs“compassionate enforcement”in dealing with people at illegal camps. Prior to the clean-up DLNR works with the Governor’s Coordinator on Homelessness, and requests outreach workers to visit the site and offer shelter and other services to all the people. Many are already working with outreach workers on the possibility of permanent housing. On the day of the clean-up, Aiu, the DLNR homeless coordinator, made multiple calls to refer individuals requesting assistance to shelters or other service providers.Despite these efforts, in the end, most people decide that they“aren’t ready yet”and decline shelter services.

“It’s frustrating because most people on DLNR lands refuse any help or services. We realize in Hawai‘i it’s tough for many people to afford housing. Some people make a conscience decision that they just want to camp,”she said.

After getting a notice to vacate a week in advance of the cleanup and after items have been collected the state will store personal items for 30 days.