Despite Regular Clean-ups the Cycle Continues 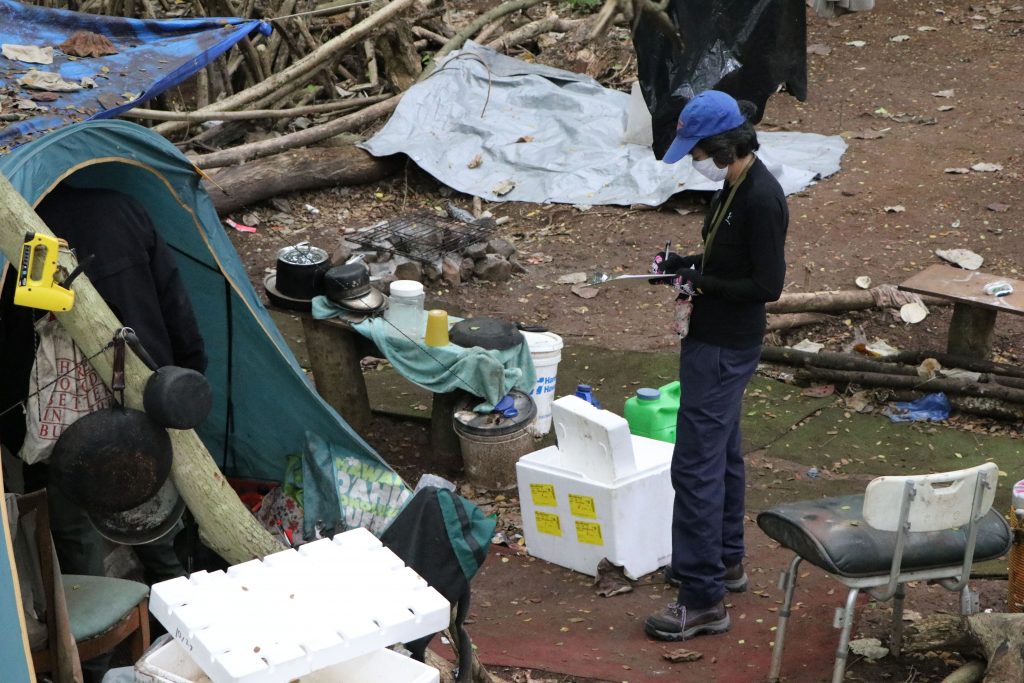 (HONOLULU) – Though they had been given notice last week, when clean-up teams arrived at a half dozen illegal camps on public lands yesterday, the occupants of three camps strung together seemed surprised they had to move. Such are the challenges of dealing with dozens of homeless camps, in multiple locations, on lands managed by DLNR.

Operations to remove illegal camps this week occurred on land under Division of State Parks jurisdiction off Kapaa Quarry Road, at Kapena Falls, and at Diamond Head State Monument. Earlier this fall, crews cleaned out dozens of camps along the shoreline at Sand Island State Recreation Area. These are four of the most popular places where people have, for years, illegally occupied public lands.

“We’re supposed to be doing natural resource management. Instead, we are trying to manage very difficult human sociological problems. It is a law enforcement situation. It is a management headache. It costs a lot of money to clean up these camps,” commented David Smith, the administrator of the DLNR Division of Forestry and Wildlife (DOFAW).

At Kawainui Marsh, the state’s largest wetland and home to numerous species of native birds, DOFAW attempts to keep illegal camps cleared. Smith said, “Quite frankly these camps are like hazmat sites. You see needles, human waste, and dead animals. It’s quite disgusting what we find sometimes. It takes a toll on our employees. Dealing with these situations detracts from our primary mission of natural and cultural resource protection and management.”

After illegal campers are given notice of an imminent cleanup by officers from the DLNR Division of Conservation and Resources Enforcement (DOCARE) and DLNR’s homeless coordinator, occupants typically pack-up a few things and leave tons of trash behind. After operations at places like Diamond Head many often sit across the road, waiting for clean-up crews to finish and then almost immediately head back to the steep, kiawe covered slopes, and set up camp again.

Currently the cleanups of illegal camps are being handled by a contractor funded by the Hawai‘i Dept. of Transportation. This week, DLNR Division of State Parks administrator Curt Cottrell hiked up one of the ridges to watch and encourage workers who hauled load after load of what he calls, “enormous amounts and varieties of rubbish and miscellaneous materials. They hand carry everything down the slippery, steep slopes of the crater for disposal.

He views the issue of illegal camps on public lands as a huge waste of time and energy. “I can’t recall how many times staff and contractors have had to come up to the slopes of our State monument. At the peak there were more than 38 illegal campsites,” he said. The good news is that there is progress, as the number of Diamond Head camps has been reduced over time due to more frequent clean up actions.

Both Smith and Cottrell feel that law enforcement resources are spread thin trying to prevent repopulation of the illegal camps. They sympathize with residents who live near these camps and everyone who uses state parks, trails, and forests for recreation.

At Diamond Head, for example, Cottrell says adjacent residents are “literally at their wits end.” The state has explored fencing off the entire portion of the monument along Diamond Head Road. With an estimated cost of more than a half-million dollars and the prospect that people would just cut through the fencing, that may not be a cost-effective or viable long-term deterrent or solution.

In addition to the huge quantities of rubbish found in the camps, during heavy rains human and animal waste can flow into streams and ultimately into the ocean, and there’s the ever-present risk of wildfire. Sensitive archeological and cultural sites have been damaged. The constant cycle of cleanups taxes already strained state resources. This week alone, DOCARE officers spent days monitoring camp removal operations at Diamond Head, Kapena Falls (which has at-risk cultural features), and at the camps on Kapaa Quarry Road.

DOCARE Officer Preston “Kai” Kamauu echoed a common sentiment. “Here in Hawai‘i we take pride in our people and the ‘āina (land). We do have compassion for the homeless or the houseless. We try to transition people into shelters, provide them with food and support or reconnect them with their families.”

Pua Aiu, of DLNR, coordinates and supervises all the cleanups on lands under the department’s jurisdiction. She said many of the people she and social services providers contact do not want to move off the land. Yet, one-by-one they manage to convince many camp occupants to move into temporary transitional housing with the goal of permanent housing. DLNR is leasing or has transferred by Executive Order (EO) multiple parcels of land on all islands for homeless shelters, affordable housing, and for housing for homeless.

DLNR Chair Suzanne Case commented, “We’re all in this together and everyone has great compassion and concern for people who by choice or circumstances elect to live on public lands. Our fervent hope is, that in time, we can restore these lands for the purposes which they are set aside for; the protection and enjoyment of our natural and cultural resources. We will continue approaching this very difficult problem from every angle possible.”