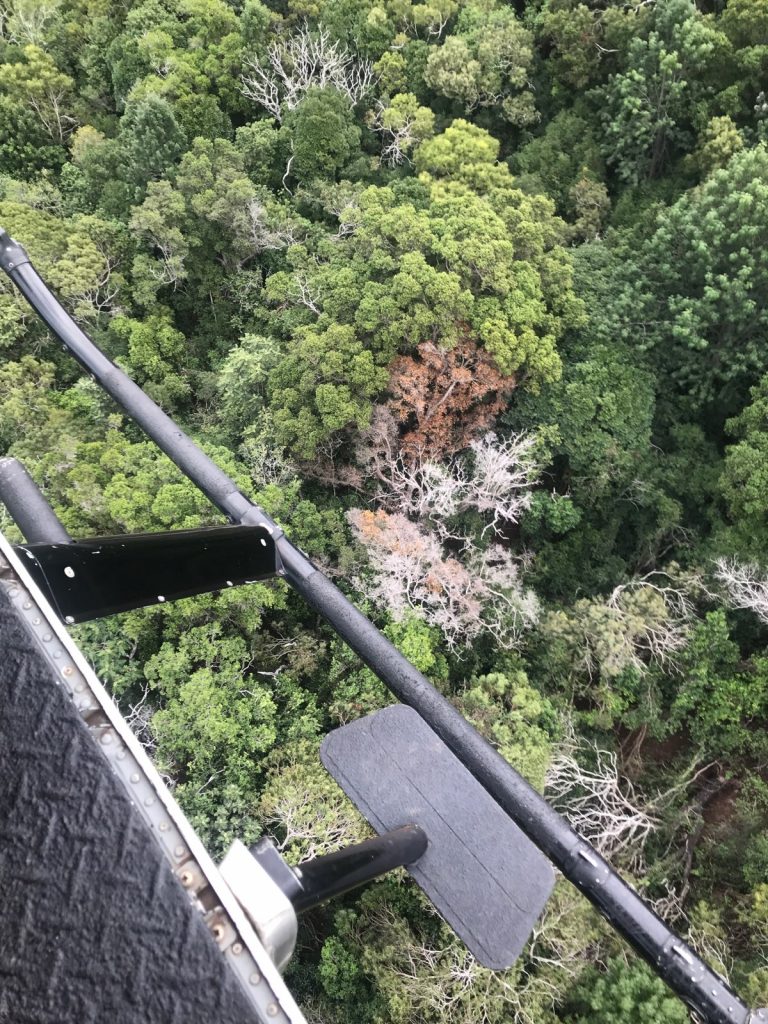 (LĪHU‘E) – For the first time, the more virulent of two fungal pathogens known to cause Rapid ‘Ōhi‘a Death has been confirmed in the Kōke‘e area along Miloliʻi Ridge Road within Nā Pali Kona Forest Reserve. During helicopter surveys this month, one tree was flagged as highly suspect for the infection that leads to Rapid ʻŌhiʻa Death.

“This detection is significant, because it means the disease is moving into pristine areas of Kauaʻi that are critical to our watersheds and provide habitat for rare plants and animals,” said Sheri S. Mann, Kauaʻi District Manager for the DLNR Division of Forestry and Wildlife (DOFAW). “Now more than ever, especially as we move into the holiday season when more people may be exploring our forests, we need everyone’s help in following bio-sanitation protocols.”

The Ceratocystis fungal pathogens can move through the environment in natural ways, including by wind.  It can also be spread around the island by people in mud on their boots or on their vehicles. To help prevent the spread of Rapid ʻŌhiʻa Death, experts recommend brushing all soil off footwear, including slippers. Use 70% rubbing alcohol to disinfect footwear and any gear used in the forest. It’s also recommended forest users wash mud off vehicles with a high-pressure hose or washer.

“The tree was a beauty, hundreds of years old, and bigger around than three people could wrap their arms around,” said Kyle Kagimoto, Invasive Species Technician with Kauaʻi DOFAW. “Its entire canopy was full of red leaves. That’s what caught our eye during our helicopter surveys.”

Since the tree is located right off Miloliʻi Ridge Road, an easily accessible road, signs have been placed near the tree and throughout the area to alert forest users. If excursions to Kōke’e include visiting more than one area or trail, DOFAW recommends decontaminating footwear, gear, and vehicles between each location. If trips include Miloliʻi Ridge Road, make that the last stop.

“One way to help reduce the spread of the disease is to cut down infected trees to reduce the amount of fungus moving in the air,” said Kagimoto. “However, there are some instances when felling is not an option. In this case, it was determined that bringing the tree down would injure other healthy ʻōhiʻa and endangered plants nearby, so it was left standing and will be closely monitored.” Regular drone surveys will be performed to survey for any other possible suspect trees in the immediate area.

“Even though this tree is dead, the fungus can live inside it for years, potentially, releasing the deadly fungus into the environment to kill other ‘ōhi‘a,” said Tiffani Keanini, manager of Kauaʻi Invasive Species Committee. People are asked to stay away from this tree and don’t  touch it, sit on it, cut it, or remove any portion of the tree.

Rapid ʻŌhiʻa Death was first detected on Kauaʻi in May 2018. In the coming weeks, the Kauaʻi Rapid ʻŌhiʻa Death Rapid Response team, made up of state and federal agencies and non-government organizations, will continue to sample ‘ōhiʻa in the Kōkeʻe area and elsewhere around the island.