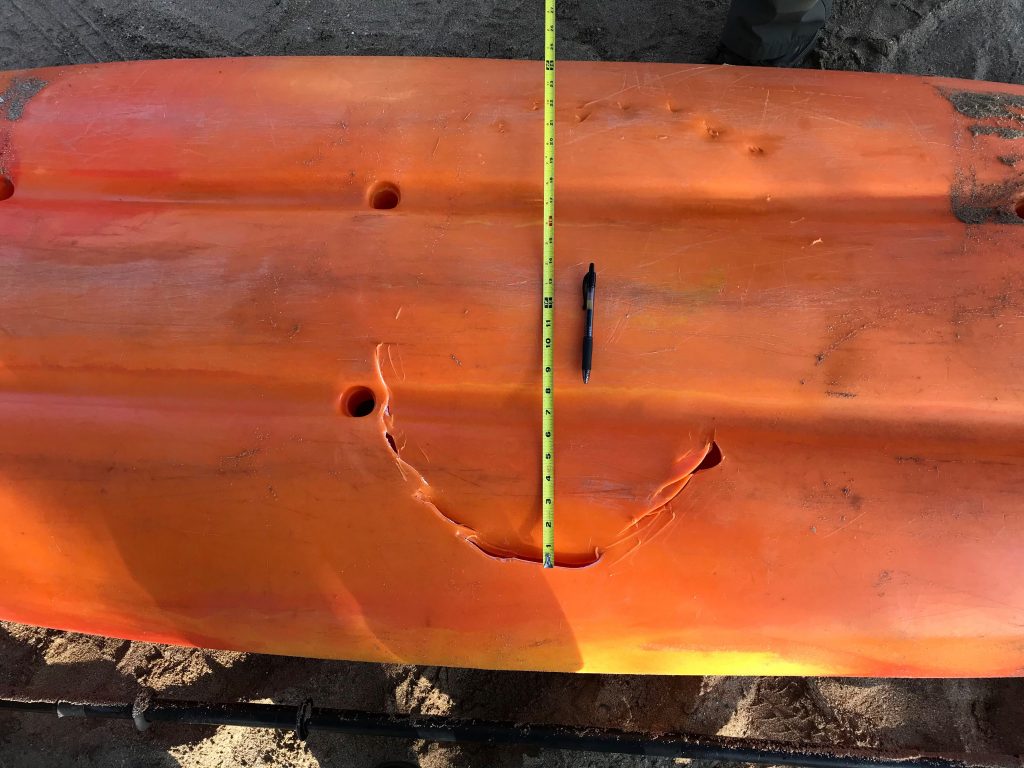 To view the virtual zoom news briefing on this incident please click on photo or at this link:https://vimeo.com/508198480

(KAHULUI) – It started as a father-son kayak off the west coast of Maui to view and photograph Humpback whales.

45-year-old Daniel Sullivan and his 15-year-old son Tristan, of Kula, paddled out on their two-man, 12-foot hard-shell kayak from the west side of the pali at around 11:30 Tuesday morning. There was a slight swell but clear water. Daniel Sullivan recounted the incident in his own words in the following social media post:

“I’m not sure how to begin. I’m alive. My son and I were attacked by a shark today. We left the West Side of Maui by kayak to go whale watching at 11:35 am and paddled out about a mile. We spotted a group of whales, a baby, a mother, a male escort whale and 2 dolphins. We paddled towards them. We gave them over a hundred yards of space, but they came towards us. The baby was young and was flopping around on the surface.

Four minutes after I took the last photo, a large shark swarmed up and bit into the kayak, just inches from my leg, rocking us to the right and flipping us into the water next to it on the left side of the boat. I saw the water stream off its head, as its teeth rose up and it bit though the bottom of our kayak just inches from my leg. I was in the water beside the shark. My son was in the front. I began hitting the shark with my paddle in the mouth. I yelled at my son who thought the whale had flipped us, that it was a shark. We climbed back into the kayak and the shark flipped us over again. We were in the water. I saw the giant shark bite on the bottom of the kayak and the water leaking in. We righted the kayak and we flipped it back over.

The kayak was sinking. It was now at water level. We laid on the kayak as it slowly sank. We knew we would have to make a decision to leave the kayak. I grabbed the dry bag. I took out my iPhone, my keys, and we started to swim. Behind us we could hear the shark hitting the kayak over and over.

The swim took us 35 minutes. We tried calling 911, but the iPhone would not swipe and slowly died. My son and I held on to the camera housing and swam together. We knew the shark might be close and I could use the camera as a weapon. My adrenaline was spent, and I felt like I wasn’t moving. I feared so much for my son. He’s a good swimmer. He is 6-feet tall and was on the swim team. We would swim for 10 strokes taking breaths and resting. A white fishing boat passed close to us and slowed down. We yelled for help, but they kept going. After 35 minutes we made it in and had to climb up the rocks to the Pali and walk back down to the car. I’m alive and I am not sure how or why, but grateful for my son’s life and mine. Much aloha and gratitude for everything after this moment.”

During a virtual news briefing today, the Sullivan’s, again recounted their experience. They told officers from the DLNR Division of Conservation and Resources Enforcement (DOCARE) that they believed the shark was 10 to13-feet long. Measurements of the bite mark on the bottom of their kayak indicate the bite was 16 inches X 23 inches. Sullivan told officers that the shark had a pointed nose but could not identify the species.

Today, Maui-based education specialist, Adam Wong, with the DLNR Division of Aquatic Resources conducted further investigation on the kayak. He will be taking DNA swabs to send to a laboratory at the UH Hawai‘i Institute of Marine Biology (HIMB) which will conduct tests to determine the shark species involved.

There is speculation about the species of shark involved, but HIMB lab director Dr. Carl Meyer said, “The Sullivan’s description of the shark and the characteristics of the bite impression are both consistent with a white shark. We will be able to definitively identify the species if we are able to recover transfer DNA from the kayak.”

The beaches that were closed yesterday, after the incident, reopened at noon today, according to standard Hawai‘i shark protocols.