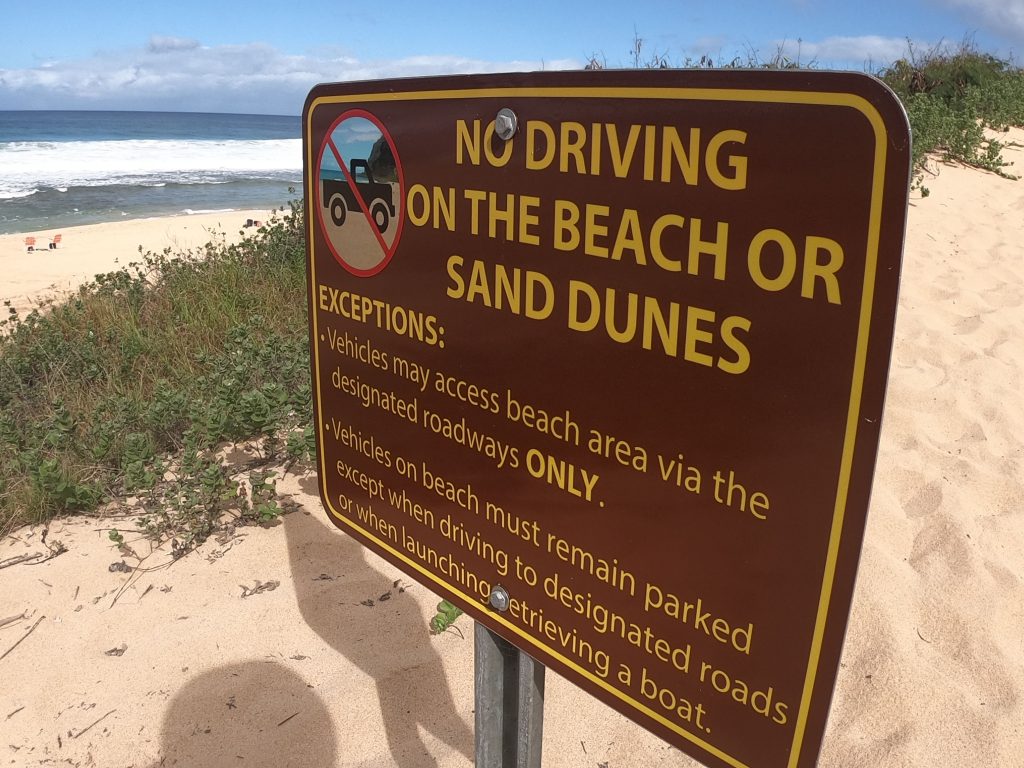 (POLIHALE STATE PARK, KAUA‘I) – Emotion overcomes Raylene “Sissy” Kahale as she describes the significance of Polihale to Hawaiian families who have lived here for many generations.

“Polihale is like our home. You don’t go to the bathroom at the same place you sleep or eat off. This place is so sacred. I don’t think people realize the mana that it brings and gives. When you come here it feels like coming home,” Kahale says, as tears well up.

Lineal descendants of the area, now known as Polihale State Park, can trace their ancestry back hundreds of years to this wind-swept, stunningly beautiful region on Kaua‘i’s west side. Sandwiched between the Nāpali Coast State Wilderness Park and the U.S. Navy’s Pacific

Missile Range Facility, Polihale has long been a place for native Hawaiians and others to visit to fish, surf, swim or just walk on the two and a half miles of beach within the park.

Sand dunes, some as high as 100-feet during certain times of the year, are one of the major attractions, but not necessarily just for their beauty. Polihale, has long been a place where it is common practice to drive on the beach. However, it has never been legal.

In addition to being Illegal, if you’re racing across dunes or up and down the sand, it becomes a safety issue for other people on the beach. Sensitive plants on the beach have been destroyed. After being forced to close the park for much of 2020, the DLNR Division of State Parks erected new signs to better define where it is okay to drive.

Due to its remote location, broad expanse, and lack of enforcement and maintenance personnel, getting everyone to play by the rules at Polihale has long been challenging.

“Fortunately,” State Parks Administrator Curt Cottrell said, “the measures we put in during the park’s closure last year, seem to be making a difference. We are getting fewer complaints of indiscriminate driving on the sand, fewer reports of large unpermitted (and unsafe during the pandemic) gatherings, and less illegal camping.”

Camping permits for the park were suspended after more than 1,000 people showed up to party at the park during a three-day holiday weekend last year. Social media has images of people driving nilly-willy across the sand, leaving heaps of rubbish behind, setting up waterslides on the dunes, and generally showing complete disrespect for Polihale’s ecological and ancestral importance. Of particular concern is people defecating in the trees and bush that line the beach, rather than using the available comfort stations.

Officer Armalin Richardson of the DLNR Division of Conservation and Resources Enforcement, who regularly patrols Polihale said, “After the closure, the park has been really mellow compared to the past and I think community involvement has a lot to do with that. Having the people so tied to the land explaining how special Polihale is, helps people be on their best behavior.”

Managers continue to deal with a litany of rotten, inappropriate, and culturally insensitive behaviors, not just at Polihale, but in parks across Hawai‘i.

“We have about 30 stewardship agreements or curator agreements across the system,” said State Parks Assistant Administrator Alan Carpenter. “Parks with formal community involvement are some of the best managed and best cared for places we have.”

Carpenter points to the interesting conflict between what was happening at Polihale and at the opposite end of the coast at Ha’ena State Park, where a 20-year-long stewardship agreement has been in place, visitation is limited, and both the quality of the resource and quality of visitor experience have been enhanced. He added, “We are hopefully looking for an agreement for Polihale with the families who have ancestors buried there and continue their cultural practices there. We just want a more compliant and understanding visitor, who gets culture first, and then recreation, if it can be accommodated.”

Kahale and other members of her family participated in the making of a video that describes the cultural significance of Polihale. Watch it here: https://vimeo.com/499830965

They are hopeful education and an agreement between the state and the lineal descendants of Polihale will ensure good behaviors, enjoyment, and recognition of culture, for everyone who visits.