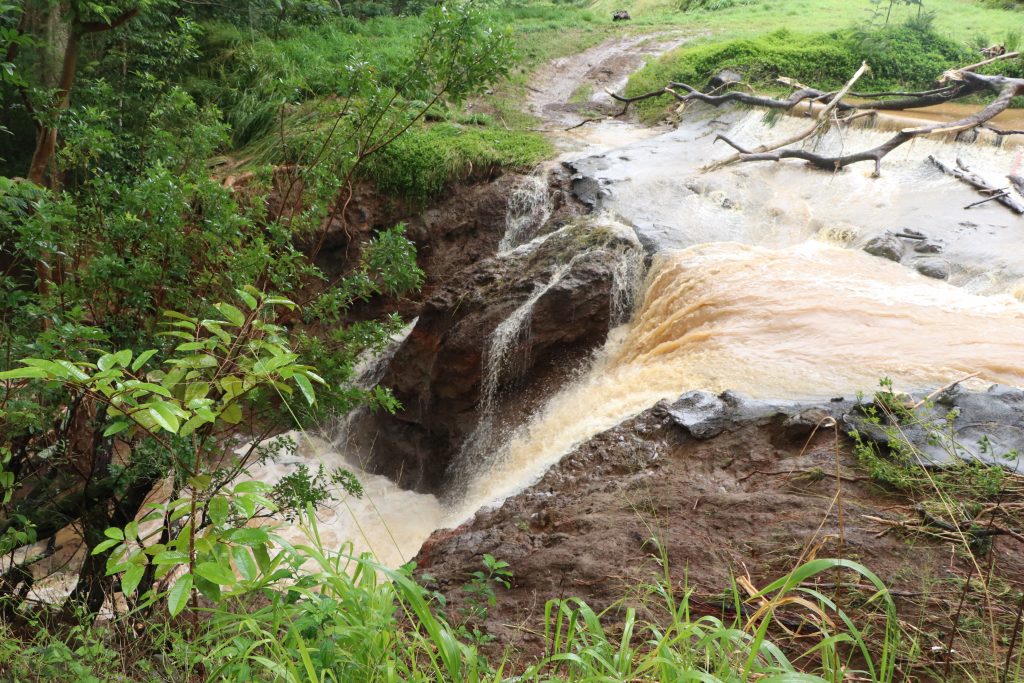 Continued rain kept the reservoir behind the dam full and water flowing over its spillway, but it was significantly less than Monday when torrential rain caused water to overtop the aged dam.

Standing above the swollen stream at the spillway, Case and Victorino marveled at the power of the flooding. A rushing brown torrent still flowed through the spillway. An enormous tree had washed across the reservoir and lay parallel to the spillway at the water’s edge.

The brown water in the reservoir was backed up in Kaupakalua Stream beyond the Peahi Road Bridge crossing a quarter mile mauka. At that spot, the one-lane bridge had been completely destroyed. Torn pavement hung over the stream, and in both directions uprooted trees and farm and home debris was scattered in the water and on the banks.

300 yards below the dam’s spillway, Mark Vaught of East Maui Irrigation Co., the dam’s owner, pointed to mangled portions of the upstream bridge’s guardrail and bridge decking that had washed down from upstream of the reservoir and were tangled with trees and other debris.

Shan Tsutsui, of Mahi Pono, showed the group of officials cell phone photos from a few days before the flood. The reservoir then, had no water in it.

Case said, “Just imagine, three days ago this was dry. This dam is old, and we require it to stay dry, so that any water coming down the stream normally just washes through. With more than 14 inches of rain in a very short period of time, the reservoir just filled up, and overtopped the dam and sent water rushing down the spillway. It will take a while for all of that water to flow out.”

Dam safety experts and the state and county officials who visited the site point to numerous things that worked well and as planned.

Importantly, the Emergency Action Plan (EAP), required for all of the 130 state regulated dam structures, worked as intended. “The owners of Kaupakalua made the right call and quickly put their plan into action”, Matsuda said. “That initiated downstream evacuations and the county emergency response and interactions. Historically, we’ve found EAPs are a key element in establishing responsibilities and what needs to happen. During an emergency it can be very chaotic and stressful, so having a plan and exercising it, is key.”

It appears so far that most of the property damage caused by the flooding, including destruction of homes and bridges, was upstream (mauka) of Kaupakalua Reservoir. The sheer volume of water coming into the stream flooded the adjoining areas above the reservoir.

On Tuesday, DLNR detailed current plans for the removal of the dam and reservoir. Planning and permitting is underway and construction to “dismantle” the dam is expected to begin this

summer. Matsuda said, “We’ve been working with the dam owners on these plans for the past year to really expedite that schedule. We do have to wait for the dry season, because this is an in-stream reservoir and you always face the possibility of more heavy rainfall. Timing will be critical.”

Case observed, “This is really an example of climate change in the present day. We have a flood emergency because of the heavy rain bomb.  And we’re seeing these more and more across the island chain – more frequent and more extreme events. This is what happens when the weather changes.  We’re all seeing it now.”