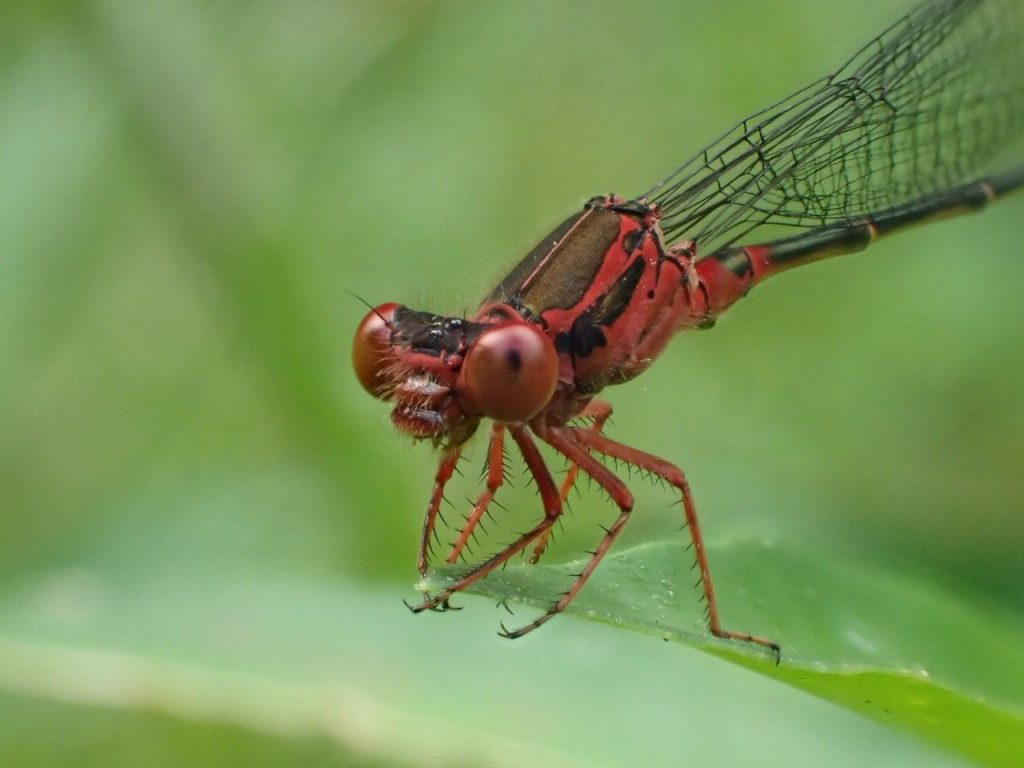 (Dillingham Military Reservation, O‘ahu) – A small platoon of biologists and technicians walk across muddy ground, amidst, shoulder-high grass to reach the point of deployment. They will be releasing an air force of orange-black Hawaiian damselflies in the bed of a small, spring-fed stream, not far from Dillingham field.

On O‘ahu currently there is only one wild population of the 2-inch-long, native damselfly, tucked in among the buildings of the Tripler Army Medical Center’s vast campus. Not exactly the ideal place to improve the lot of this species.

“It’s not a super stable place for orange-black damselflies,” explained Kapua Kawelo, the U.S. Army’s Natural Resources Program Manager on O‘ahu. In the early 1990’s the Army teamed up with the University of Hawai‘i to try and establish a second population of the insect at Dillingham by moving damselflies from Tripler, but that effort was not successful. More recently, the DLNR Division of Forestry and Wildlife invertebrate program joined with the Army to raise the endangered damselfly in a breeding facility for introduction at Dillingham. With the development of new captive rearing techniques for the species, they can release much higher numbers.

“So far we’ve released about 4,000 damselflies reared in captivity,” said Dr. William Haines of the State’s invertebrate program. “We’re seeing the first evidence of wild reproduction at one of our release sites.”

How do they know? All the released damselflies have a small number marked on their wings. Haines added, “We’re starting to see individuals emerging from the stream that are not marked, which means they are wild born. That’s really encouraging to see they’re completing their entire life cycles in the wild.”

Next month, after a full year of weekly releases, the team will stop releasing damselflies and continue monitoring the success of the program, hoping for a sustainable population at Dillingham. Both Kawelo and Haines are optimistic. “The final test will be when we pull the plug on continual introductions from the lab,” Kawelo commented.

The orange-black damselfly is a vulnerable population at the risk of extinction. It’s one of about 25 species of endemic damselflies found only in Hawai‘i…but several species have already gone extinct. The reason is another story in which a species was imported to the islands to control an invasive species, but it ended up backfiring.

Their biggest predatory threat is the mosquito fish, introduced in the early 1900s to control mosquitos. The fish feed on the immature, aquatic stage of the damselfly as well. Haines said, “Very quickly you saw damselfly populations declining after the introduction of the mosquito fish.”

Like all native species in the fragile “circle-of-life” in the Hawaiian Islands, native damselflies play a role in the environment, providing ecosystem services. The adult damselflies prey on other flying insects, like non-native mosquitos and flies. The immatures are also predators, eating aquatic insects like mosquito larvae.

Each release of the orange-black damselfly involves 50-120 of the delicate insects. After they leave their netted enclosures, they fly off to hunt insects in the surrounding forest. Eventually, they will return to the stream to mate and lay eggs in aquatic plants. “If we can sustain a population at Dillingham for an entire year, that is encouraging for the success of long-term populations, not only on O‘ahu, but also on other islands,” Haines indicated.

That is why there is a race against the extinction clock. Kawelo, the Army’s Natural Resources Program Manager, concluded, “This species is one of the first I began working on more than 25-years ago. The orange-black Hawaiian damselfly was not endangered at that point, yet despite all the challenges finding a predator-free site, I’m really optimistic.”