5/12/21-KAIMANA BEACH OCEAN-GOERS RISKING THEIR SAFETY, KEIKIS’ SAFETY WHILE MONK SEAL AND PUP ARE AROUND

KAIMANA BEACH OCEAN-GOERS RISKING THEIR SAFETY, KEIKIS’ SAFETY WHILE MONK SEAL AND PUP ARE AROUND 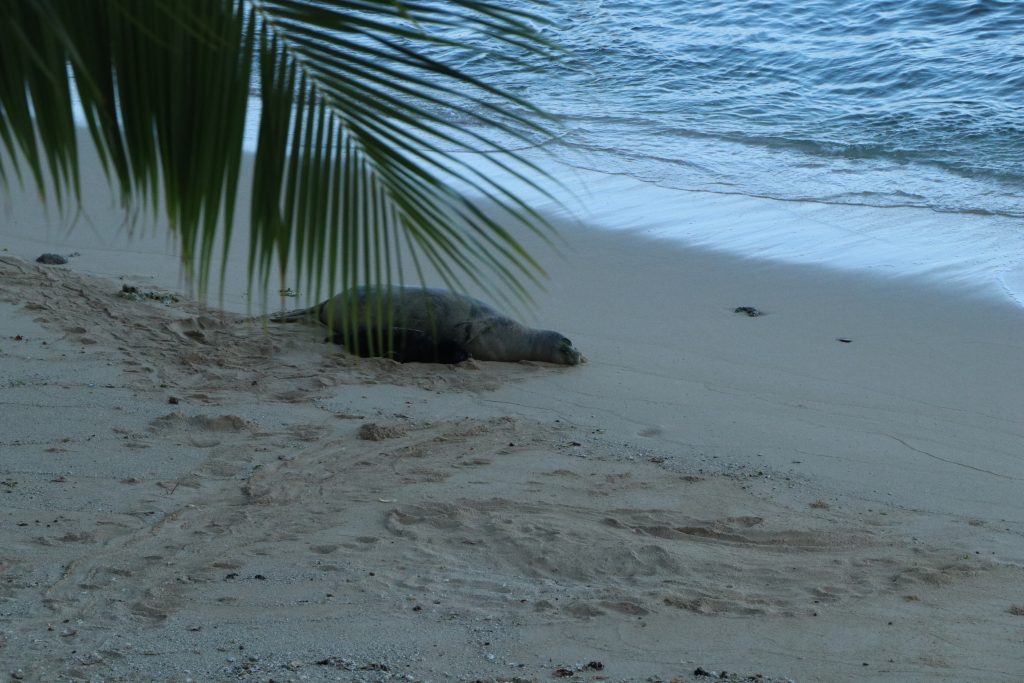 (HONOLULU) – Hawaiian monk seals resting on beaches always attract a lot of attention, particularly when it is a mom and her newborn pup. A well-known, 10-year-old seal, Kaiwi, gave birth to her fourth pup two weeks ago at Kaimana Beach on the edge of Waikīkī. Just like in 2017 when a seal named Rocky, pupped a seal which was named Kaimana, the recent pair have become quite an attraction.

Experts from county, state, and federal agencies are joining forces to again warn swimmers, snorkelers, and paddlers of the risks people going into the ocean off Kaimana beach face, as long as Kaiwi and her pup are in the area.

“Like all mothers, monk seals are very protective of their pups,” explained David Schofield, NOAA Fisheries Regional Marine Mammal Response Coordinator. “While they are resting on the beach, they look docile, but once they go into the water they can move very, very fast, like lightning speed. If a mother seal detects any threat to her pup, she is likely to attack and that is a major concern for us.”

In 2009, at a remote beach in the Poipu area of Kaua‘i, a young woman from Washington State encountered a mother seal and her pup, while snorkeling 25-50 yards off-shore. Earl Miyamoto, now retired as a DLNR wildlife manager, was on pup-watch duty.

“A volunteer came running over the dune saying a swimmer had just been attacked,” Miyamoto recounted this morning. “She was bleeding profusely from the mouth and nose and she kept saying, my hand, my hand.”  The seal likely had her entire head in its mouth, and Miyamoto believes the woman’s snorkel mask and tube protected much of her face. It did fracture her skull and the seal’s bite broke every bone in one of her hands. “This is a wild animal; the ocean is the seal’s home. If you are out there swimming and it doesn’t matter how strong of a swimmer you are, if that seal decides you are a threat, you have no chance of escaping.”

John Gelman, his staff, and dozens of volunteers with Hawai‘i Marine Animal Rescue (HMAR) are the people who establish “resting perimeters” for seals and educate people about them. He reiterated, “If you’re in the water and posing a threat to the mom and her pup, you could be attacked with little or no warning.”

Lifeguard Christopher Zorbo of the City and County of Honolulu Division of Ocean Safety, mans the lifeguard tower at Kaimana five days a week.  As an expert waterman, he says he would not even think about going into the ocean while a seal is with her pup on the beach.  Multiple times each day, he uses a bullhorn to caution people. “Attention, attention, swimmers, snorkelers, surfers, paddlers, please respect the boundaries of the monk seals,” he announces. The problem, Zorbo said, “if you’re far offshore with your head in the water, you’re probably not going to hear my warning.”

NOAA, the Honolulu Police Department, Dept. of Parks and Recreation, the C&C Ocean Safety Division, HMAR, and the DLNR Division of Conservation and Resources Enforcement (DOCARE) are teaming up to try and convince people to switch swim beaches for the next month or so. The pup is expected to wean from its mother by then.

DOCARE Chief Jason Redulla commented, “We all understand that seals resting on the beach get people’s attention. By our very nature we’re curious. That brings the challenge of controlling people and their behaviors, to not only protect themselves, but the animals as well. The last thing any of us wants to see, is someone getting hurt.”