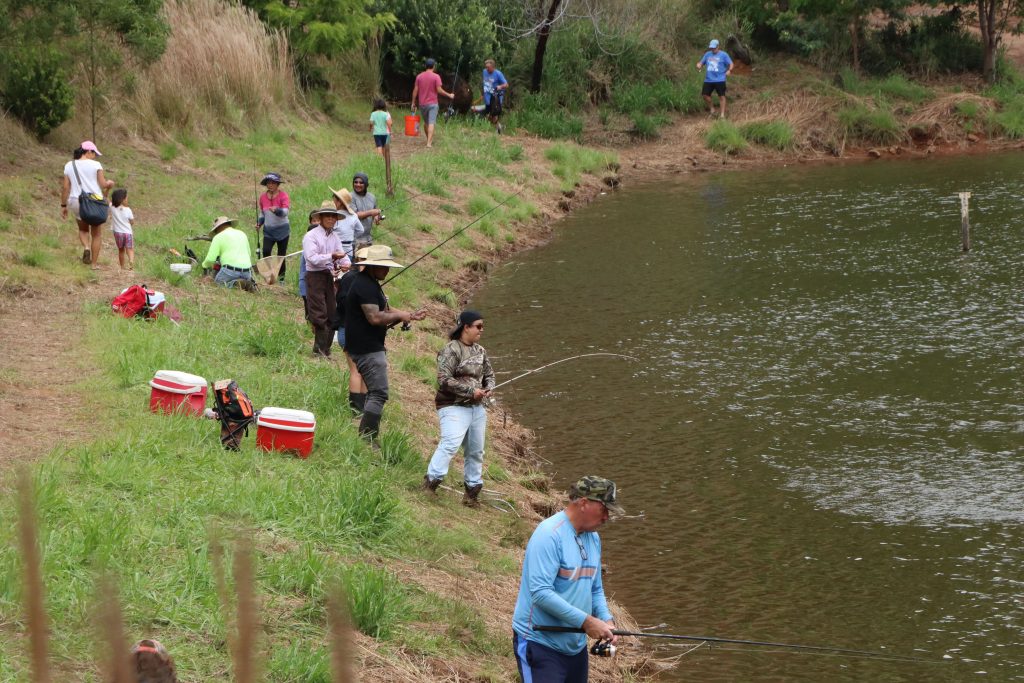 (Kaua‘i)–Across the day, an occasional whoop and cheer went up along the banks of the Pu‘u Lua Reservoir atKōkeʻe, when another fisher caught a rainbow trout. The annual trout fishing opening weekend was a bit different for a second year in a row, due to the COVID-19 pandemic.

A Father’s Day weekend tradition, dating back an estimated 70 years, brings families of fishers out for the only regular rainbow trout fishing opportunity in Hawai‘i.

Mark Sueyashu of the DLNR Division of Aquatic Resources (DAR) has been involved in trout fishing seasons for the better part of a quarter of a century…first as a volunteer and now as the  primary organizer of the annual affair.

“We try to time opening weekend, two-weeks after school’s let out, so it typically coincides with Father’s Day,” Sueyashu explained. “Rainbow trout are not a native species and Pu‘u Lua is the only place where you can fish for them.”

Eggs are brought in each year from a hatchery in California and then hatched at the Anuenue Fisheries Research Center on O‘ahu. Once the reservoir water is cold enough, they’re shipped to Kaua‘i, where they’re held in enclosures in the middle of the lake before being released.

For the second year in a row, DAR conducted a lottery for the chance to fish one of the first two days of the season. Close to 1,000 people drove up to the lake yesterday and today for four different scheduled four-hour-long fishing sessions. DAR staff checks them in and out, ensures they have fresh-water fishing licenses, and provide information and education about fishing opportunities in general.

David Banquel brought his two children and a nephew to the Sunday afternoon session. He said he’s been coming to Pu‘u Lua for so long, he has no idea how many years. “It’s a chance to disconnect from all our digital devices, to enjoy the serene surroundings, and to bond with the family.”

There are no size limits on caught trout and each fisher is allowed to catch seven each day. 26,000 hatchery-grown trout were released into the reservoir this year.

Unlike, many western states where trout are often coated in cornmeal and fried, the preferred method in Hawai‘i is to smoke them. Banquel doesn’t really care for the taste of trout, but hiselderly neighbors do, so his family typically gives their bounty to them.

The special nature of fathers, sons, daughters, and entire families enjoying the annual outing is not lost on Sueyashu. “While many families have been coming for many years, a lot of people are still surprised that you can fish for trout in Hawai‘i, but only here.”

Only the first two days of this season required lottery sign-up. The season is now open 6 a.m. – 6 p.m. daily through Sept. 30.