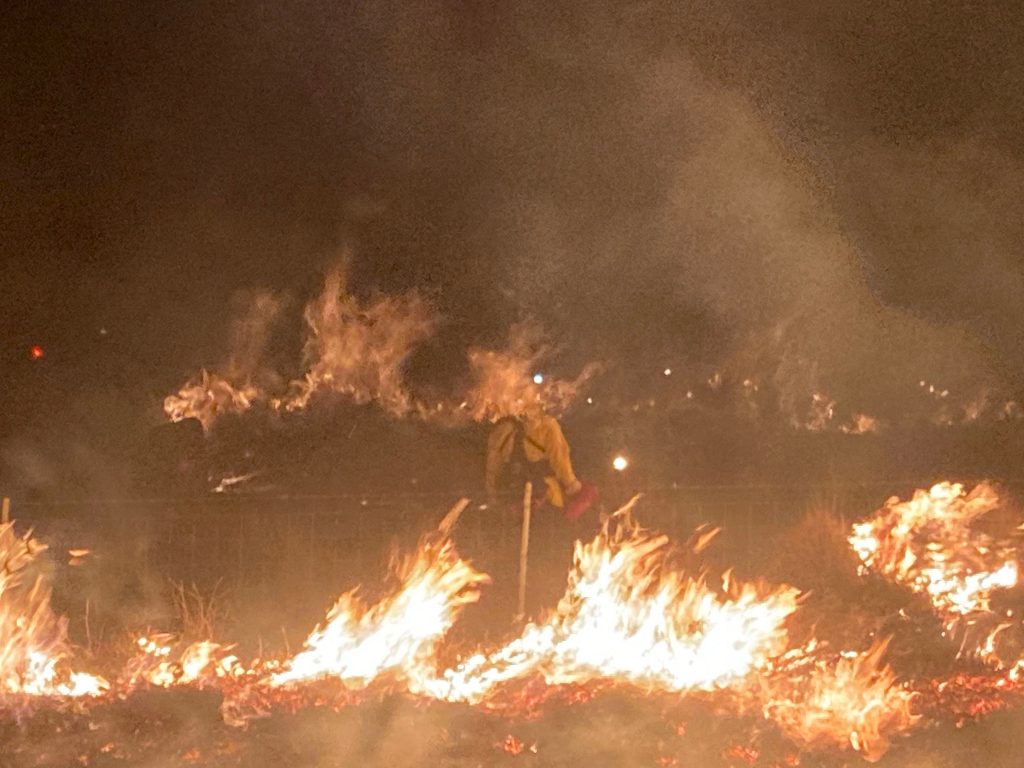 (HILO)– The Mana Road fire that burned along Old Saddle Road on the slopes of Mauna Kea on Hawai‘i Island was one of the largest wildland fires in recorded Hawai‘i history. In late July and early August, it scorched more than 42,000 acres of mostly grassland above Waimea and largely on the Parker Ranch.

Firefighting agencies, including the Hawai‘i Fire Department (HFD), the DLNR Division of Forestry and Wildlife (DOFAW), the National Park Service, and the U.S. Army Garrison – Pōhakuloa Training Area (PTA) Fire, dispatched dozens of pieces of apparatus, aircraft, and firefighters to bring the fast-moving fire under control.

Existing mutual aid agreements allowed agencies to immediately join the battle. The agreements are under the umbrella of the Big Island Wildfire Group. The PTA Fire Dept., for example, agrees to respond to fires and other emergencies within 25 road miles of its base. Base firefighters have responded island-wide when called upon. Other fire agencies credit the military’s water drops from helicopters as one key to stopping the fire from spreading further or burning longer.

“We were able to bring in four Blackhawks and one Chinook from Wheeler Army Airfield on O’ahu, which allowed us to have multiple aircraft in the air at all times, said Pōhakuloa Fire Dept. Assistant Chief for Operations Greg Simon. “While two of the Blackhawks were refueling the other two would be out doing the rotation. The Chinook had its own rotational cycle. It is great because it has a much larger capacity bucket and can drop a lot more water. We have the large capacity of the military aircraft, while the County and contract helicopters can do more precise water drops.”

HFD Fire Chief Kazuo Todd said,“Our ability to come in and deal with a fire of this magnitude, highly relied on us being able to tap into other resources on the island and throughout the state. We had personnel responding from O‘ahu and Maui, as well as the National Guard, our military assets at PTA up on the mountain, personnel from the National Park Service, and DOFAW. Through the concerted efforts of the county, state, and federal agencies, we were able to put down the fire and eventually prevent as much damage as possible. We did lose a few homes in the Pu’ukapu area. However, due to the interagency cooperation, we were able to stop the fire before it entered into most of the communities that were potentially threatened.”

Beyond the government assets, fire managers credit Hawai‘i Island’s spirit of helping one another in times of crisis, as also instrumental in keeping the Mana Road fire from spreading.

“We had over 20 dozers present on this fire,” explained DOFAW Hawai‘i Island Branch Manager Steve Bergfeld. “Some dozers and operators showed up to help without being asked. Pu’ukapu Homesteads and Waiki‘i Ranch were actively involved in protecting their property. Parker Ranch, as the major landowner, was heavily involved.”

Heavy equipment companies volunteered both bulldozers to cut fire lines and water tenders to help replenish supplies. “The community involvement was amazing. I don’t think any of the fire agencies had to purchase any food because we had so many donations from local hotels, businesses, community members, and Hawai’i Giving Tree,” Bergfeld added.

Lance Stevens, a Hawaiian Homes resident, credits the tremendous amount of agency and community cooperation for keeping the Mana Road fire from causing more destruction. “In this time and age, it’s hard to find those times where people can come together. Neighbors, friends, just good people out there, came together and helped save property and of course people’s lives. You know, I’m grateful for that. That was awesome. Thank God.”

Recent rains are beginning to cover the scars left by the Mana Road fire. Green grass is sprouting in the blackened earth, though eucalyptus trees that were scorched remain brown and dead. Now the firefighting agencies have begun the process of analyzing what worked and what could improve for future wildland firefights, which are predicted to be more frequent and larger due to global climate change.

HFD Chief Todd concluded, “What we want to do in the future is have better management when we start running into these large fires. We’re very used to dealing with several thousand-acre fires and working together very well for those. A 40,000-acre fire is not a several thousand-acre fire. It is vastly different. The Mana Road fire spanned over 62 and a half square miles. It’s about the size of 10% of the island of O‘ahu. When you have that many units spread over that much area, the ability to just know where your units are and what they’re doing is hindered. We did encounter a lot of difficulties on this fire…just in terms of radio communications or how are we going to manage the traffic? There were 27 dozers on the scene at one point. How do we communicate with all the dozer operators? We’ve got to plan for these kinds of events, as something that becomes more normal.”