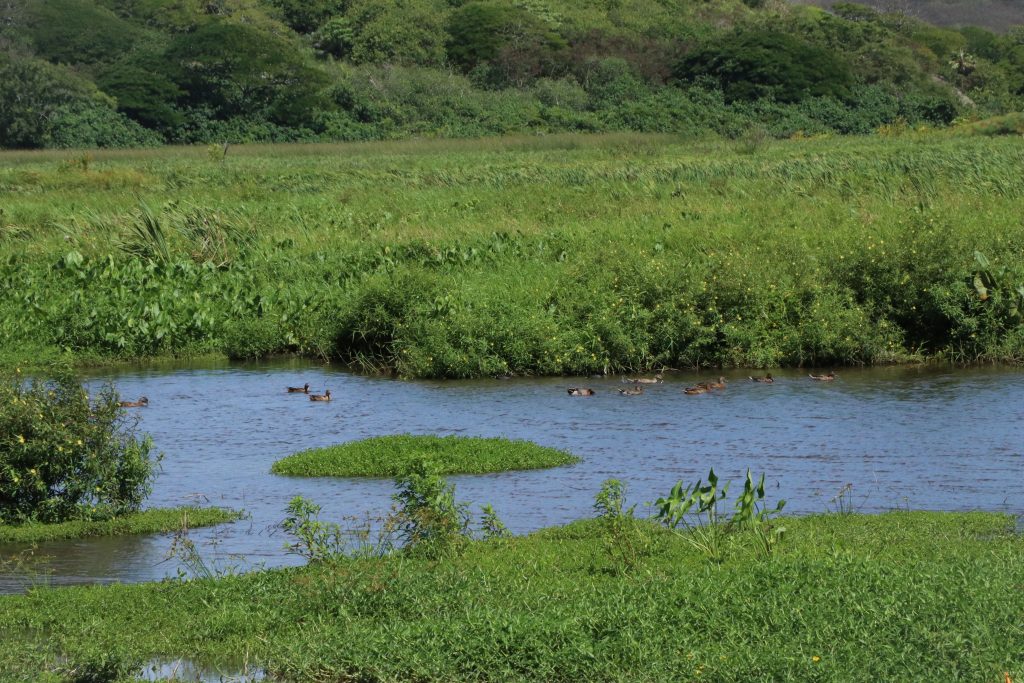 (Kailua, Oahu) – While prepping to board a nearby amphibious vehicle, Hawai’i State Senators Chris Lee and Jarrett Keohokalole are briefed by DLNR Division of Forestry and Wildlife (DOFAW) Administrator David Smith and staff on the ecological significance of the Kawainui Marsh State Wildlife Sanctuary. Last month, the two senators embarked on a tour of the restoration efforts in the historic wetlands.

Smith explained, “Kawainui’s management is key to protecting this habitat’s endangered wetland birds such as the stilt (ae‘o), coot (‘alae ke‘oke‘o), gallinule (‘alae ‘ula), Hawaiian duck (koloa), as well as a whole suite of migratory birds that utilize this area.”  DOFAW also owns the upper watershed that drains down into Kawainui Marsh. “Wetlands are a really important part of cleansing water before it enters the ocean,” said Smith.

As the group traversed the wetlands,  DOFAW  Biologist Lindsey Nietmann pointed out native endangered plants, such as the pū’uka’a (Cyperus trachysanthos), which were chosen to grow in the wetlands for their ability to thrive both in dry and wet conditions. “The level of this natural pond actually fluctuates quite a bit with the seasons,” Nietmann said. “Pū’uka’a will be able to tolerate the changes in water level. And then we’ve also planted some ‘ie’ie (Freycinetia arborea), which is the ground cover that you see among the pū’uka’a.”

The restoration of the Kawainui Marsh State Wildlife Sanctuary began in February and was funded by the North American Wetlands Conservation Act (NWCA), with matching funds from DOFAW. This facilitates a partnership with the nonprofit Hui o Koʻolaupoko to create a mosaic of mudflats, open water, and native wetland plants on almost 20 wetland acres.

Smith acknowledged the hard work of Nietmann and her DOFAW colleagues in their continuous work to restore and maintain the marsh. He also remarked on how sizable the task is of restoring the state’s largest wetland. “This is a big giant elephant, you know. You just start to eat it, one bite at a time. There is a lifetime’s worth of work to do out here. People like Lindsey just get out there and they just start to chip away at it and see where you can make a difference.”

Senator Lee, who has done a generous amount of work providing resources and funding to support the conservation efforts at Kawainui Marsh, decided to take this tour alongside Senator Keohokalole to get a first-hand update on the restoration efforts from the people who manage the habitat. Their goal was to observe the successes that DOFAW has had in the area, as well as to better understand future challenges.

Senator Keohokalole expressed his admiration of the marsh and the work put into restoring it. He said, “I think even for me, I forget about just how big this area is and how beautiful it is. And how much work and resources it takes; manpower, equipment, and time to restore the natural habitat and keep these native ecosystems going or expand them out so that they can return to what they were before. These are really special, beautiful areas that have critical purposes for flood mitigation and ecosystem management.”

Smith attributes adaptive management as a key strategy in the protection and management of Kawainui Marsh State Wildlife Sanctuary. He expounds, “You find those areas where you can have the greatest impact and be the most cost-effective in terms of producing wildlife habitat improvements. And those are the areas where we’re going to work first and then just branch out from there.”