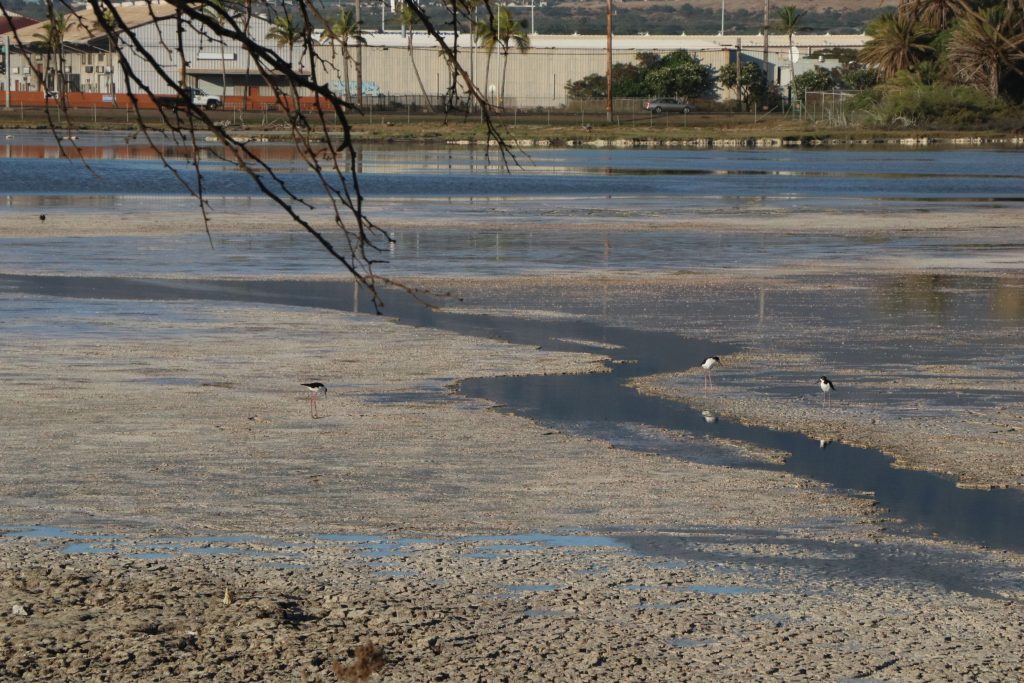 (KAHULUI) – The rusting fence around the Kanahā Pond Wildlife Sanctuary on Maui is closer to being replaced with a predator-proof fence, with Governor Ige’s Wednesday release of initial funding for the project. The bird sanctuary, surrounded by urban and industrial development, has also been a focus of this week’s mass clean-up of trash, vehicles, and camps from adjacent Amala Place.

“To be honest, Kanahā Pond had to grow on me. Initially, I just thought it was a hot, muddy, swampy place,” joked Sasha Smith, the DLNR Division of Forestry and Wildlife (DOFAW) forestry and wildlife technician who has watched over the sanctuary for a decade. “I’ve discovered a side of the pond which most people don’t get to see. There’s a lot of misconceptions,” she added.

A few examples. Many born and raised Maui residents drive past the pond every day and don’t notice it or know anything about it. The pond is fed by fresh water and prehistorically was a true wetland, that now is highly modified but still functioning as a wetland. It now acts as a flood control basin as well as a wildlife sanctuary.

Smith, other DOFAW and DLNR Land Division staff, along with a contractor, participated in clean-up operations on the makai side of Kanahā this week. On Tuesday, officers from the DLNR Division of Conservation and Resources Enforcement (DOCARE), cleared out the last few people who’d set up long-term camps in the naupaka next to the beach.

On Wednesday, the DOFAW team was back, cutting back non-native brush and plants. “I have a bias toward native plants, Smith says, and DOFAW and volunteers have been slowly restoring the native coastal species. “We’re doing a lot of work to create native habitat for the birds.”

Kanahā Pond provides protection for Hawaiian waterbirds, many of whom are endangered, as well as migratory bird species. Most common of the native species is the Hawaiian stilt – birds that stand in the water, sometimes on one very skinny leg. Hawaiian coots, koloa ducks, black-crown night herons (‘auku‘u), and nēnē also frequently rest and feed in the pond.

When the wildlife sanctuary is open, typically from September to April, many visitors are also fascinated by the multitude of WWII era bunkers. Yesterday a trio of nēnē was spotted on top of one of the crumbling bunkers, cooing and peering down on the pond.  Smith says the birds are a breeding pair and last year’s offspring, just checking things out.

The governor’s release, on Wednesday, of $300,000 toward the $1.3 million cost of a predator- proof fence, moves the project closer to a hoped-for completion of August 2022.

Smith commented, “We are on the verge of getting the fence built. The permanent encampments on Amala Place made it impossible to proceed with the project, but thanks to the division working diligently to come up with federal grant funding, matched with state funding, we’re close.”

The fence will be constructed of rust-resistant materials and will keep deer, cats, dogs, mongoose, mice and rats out of the sanctuary, and from damaging vegetation and attacking birds. Smith hopes once the fence is up and other restoration work is complete, more people on Maui and from across the state will view Kanahā Pond as the treasure that it is…one of the largest and most important havens for wildlife in Hawai‘i.