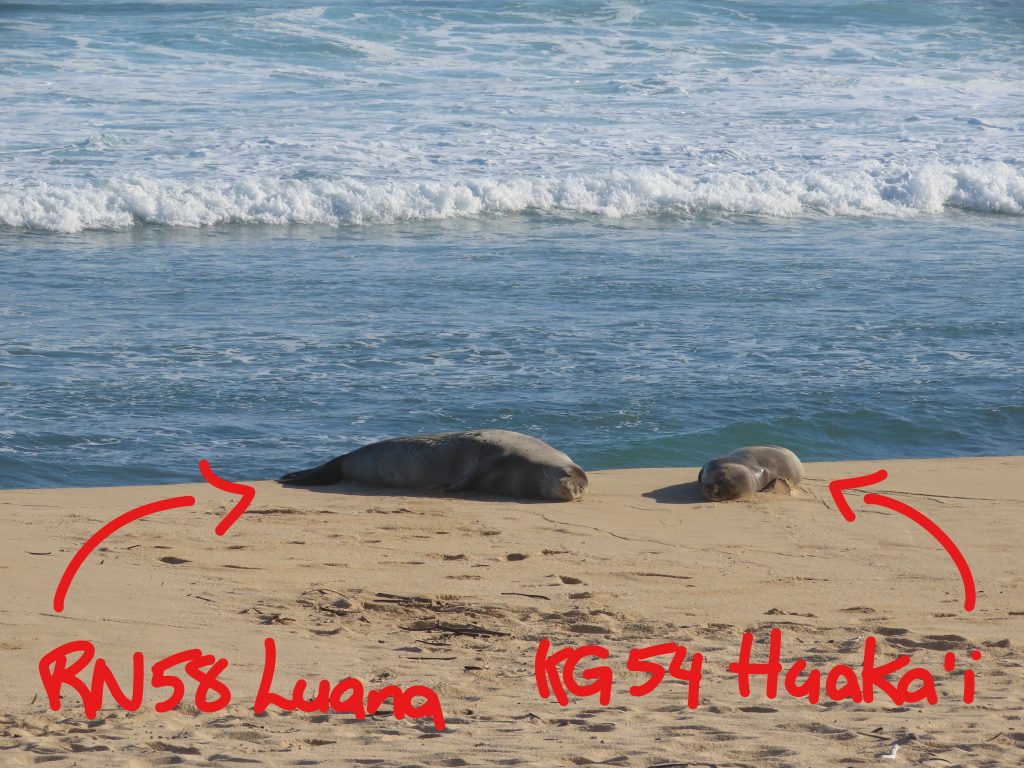 (HONOLULU) – Researchers know that endangered Hawaiian monk seals range broadly across the Hawaiian archipelago. Data shows that 10-14% of adult monk seals move from their birth island to other islands.

Dr. Michelle Barbieri, the Program Lead for NOAA’s Hawaiian Monk Seal Research Program commented, “We have data that shows at least ten seals have made at least 14 different trips between the main Hawaiian Islands, the Northwestern Hawaiian Islands, and Johnston Atoll between 1981-2011 and since then, there have been several more. What’s impressive about KG54 is she made the trip in about a month, where other seals are more likely to make it over the course of several years.”

Lesley Macpherson, an Interpretive Technician at Ka‘ena Point State Park, was first notified of a “new” seal, resting on a beach adjacent to the park. “When I went out to try and identify her, I spotted a gray-colored ID tag. Seals born in the main Hawaiian Islands have red tags, so it was exciting to realize she swam so far, so quickly, all by herself. It’s amazing, really amazing.”

This morning Macpherson reported a third seal resting on the beach, along with RN58 and the new arrival, which she nicknamed Huaka’i, which means traveler, journey, or path taken.

On Saturday, KG54 rested on a deserted beach in the park, alongside RN58 (nicknamed Luana), a much fatter, eight-year-old female seal. “We know she left Kure in mid-August, but we don’t know at this point her molt status,” said Barbieri. Seals are typically lower weight after molting. “It seems reasonable that she expended a lot of energy coming to O‘ahu. However, some seals from the NW Hawaiian Islands can be thinner than those born in the main islands, so it’s probably a combination of both factors,” Barbieri added. She and others hope the seal refuels after her long journey before undertaking further travel.

Researchers don’t have a complete picture of monk seal movements around the islands. The experience of KG54 again demonstrates the ecological behaviors of seals. Barbieri explained, ”A 2015 study, looking back 30-years, shows seals mostly moving between neighboring islands and less often long distances. The ability of these animals to island-hop is what has allowed them to colonize new areas over time.” Travel of up to 400-kilometers between islands is more common, unlike the one KG54 just made of 2092-kilometers in fewer than five weeks.”

A different study verified the presence of monk seals in the Hawaiian archipelago for hundreds of years. Study author, Dr. Jack Kittinger wrote that though the prehistoric period remains poorly understood, findings suggest that monk seals were referenced in Hawaiian-language newspapers in the late 19th and early 20th centuries. References are also made to monk seals in traditional knowledge forms and in familial histories.

Brian Neilson, the Administrator of the DLNR Division of Aquatic Resources (DAR) concluded, “The arrival of Huaka‘i demonstrates the ability of seals to move over long distances and to colonize islands that are separated by hundreds and thousands of miles. This, in part, explains how they have been able to slowly rebound from such small population numbers, once confined to the Northwestern Hawaiian Islands.”