THE HUNT FOR RARE PLANTS SOMETIMES RESULTS IN MAJOR SURPRISES

Near Extinct Ferns on Kaua‘i Discovered 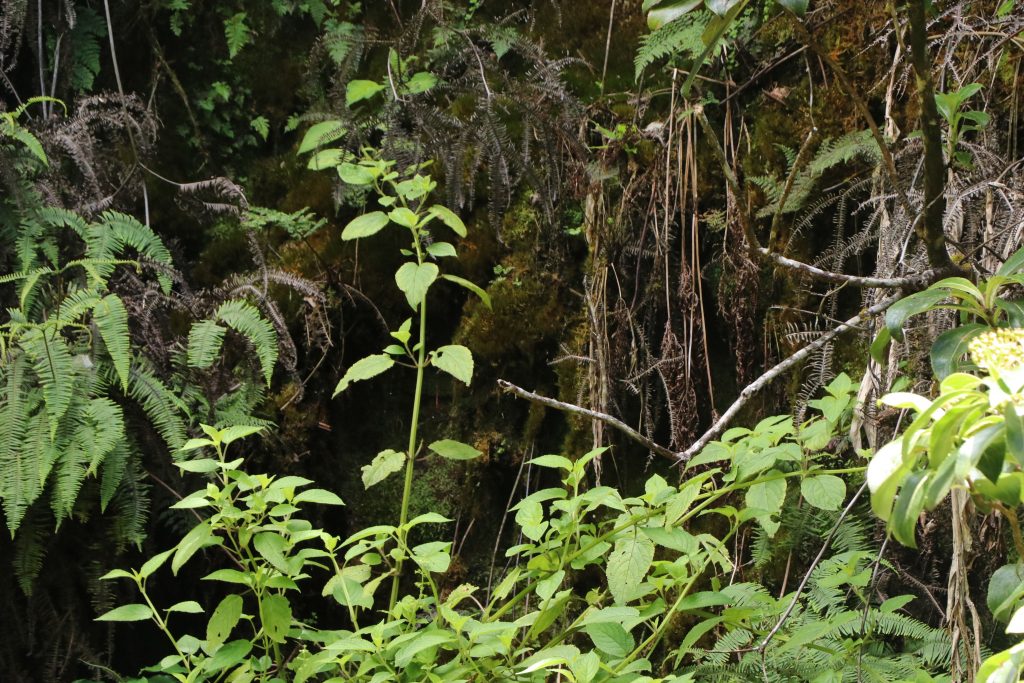 (Līhuʻe) – It was last seen on Hawai‘i Island five years ago and thought possibly to be extinct. A rare, critically endangered fern that grows on ʻōhiʻa and on a few other native tree was recently discovered by a team from the Hawai‘i Plant Extinction Prevention Program (PEPP).

In May, Susan Deans and Scott Heintzman were near the end of their workday, climbing up waterfalls and bushwhacking through the brush on the way back to a helicopter landing zone, when they spotted it.

“It was really exciting to find this pendant kihi fern (Adenophorus periens), which is one of the more recent extinctions in the wild. We’re always looking for it when we’re in the field and we have GPS points where it used to be found on Kaua‘i, so when we’re in those areas we’re always scanning every tree, looking at all the ferns in the same genus. We always have our eyes out for it, so while it was in the back of our minds, I don’t think either of us were expecting to see it on a tree trunk right in front of us. It was a big surprise and extremely exciting,” said Deans.

Heintzman added, “We’d been looking at other ferns that look like this fern, thousands and thousands of them really closely. We joked all the time that one day we were going to see one. What an exciting discovery. Just out of nowhere and it was right there in our faces.”

PEPP is now in the process of talking to different plant experts and propagators to see if they can get a frond (sporophyte), the reproductive part of the fern, growing in a nursery. Heintzman dismisses any notion that a single plant can’t lead to recovery of an entire species. “A lot of our rare, native plants got here from just one plant. There’s great hope that they can recover and regenerate off even one plant.”

The pair of PEPP field technicians believes the discovery is a point of light, as many experts believed this pendant kihi fern was likely extinct. For their single discovery the biggest concern is prolonged drought conditions created by global warming and habitat modification, both of which can lead to an invasion of weeds.

Recovery is a multi-step process, as Heintzman believes it takes propagules four or five years to grow into an adult fern. Deans added, “We want to see what stage of life cycle this fern is in when we visit it again. We need to time it so we can collect spores when it is fertile. If we can reproduce it in the nursery the next thing is to figure out how to attach and anchor it to a tree. That’s definitely going to be a challenge…another steppingstone.”

PEPP and the State’s Hawai‘i Rare Plant Program characterize the fate of 250 native plant species as an “extinction crisis.”  The recent discovery of the Adenophorus periens on Kaua‘i is a case study as to what can happen due to the concerted efforts of the people working to reverse the course of native plant extinctions.

According to botanist Matt Keir, of the rare plant program, the species was classified as Critically Endangered (Possibly Extinct) by an IUCN Red List assessment in 2015. “This rank is given to species when we still think there is a chance it will be found alive again, and thankfully that was correct in this case,” Keir explained. The fern will still be ranked as Critically Endangered but will be updated to remove the “(Possibly Extinct)” ranking.

At the time of listing in 1994 there were 1,280 known individuals of Adenophorus periens on the islands of Kaua‘i, Moloka‘i, and Hawai‘i. The last known plant on Molokai was observed dead in 2004. By 2009, the total statewide population had declined to an estimated 51-123 plants. By 2012, only 31 plants were remaining on Kaua‘i and fewer than ten on Hawai‘i Island where the last individual was observed to have died in April 2015. Surveys conducted in that region since have not found any more live plants. By 2019, no plants had been observed during surveys on Kaua‘i and the species was considered possibly extinct by PEPP.

The good news, according to Adam Williams a DOFAW Botanist on Kaua‘i, is, “From that first plant found in May, the Olinda Rare Plant Facility on Maui, has five gametophytes growing (first stage of fern life cycle) from spores that Scott and Susan collected. The PEPP team has found two more populations, one with one plant, another with at least two plants. So, there are now three populations with at least four plants total in the wild on Kaua‘i, and some material in the first stages of propagation.

The search for rare and endangered plants is featured in the new documentary, Cliff Dwellers of Kaua‘i…and the people who hang with them! airing on KHON2 on Saturday, Oct. 2nd at 7:00 p.m.